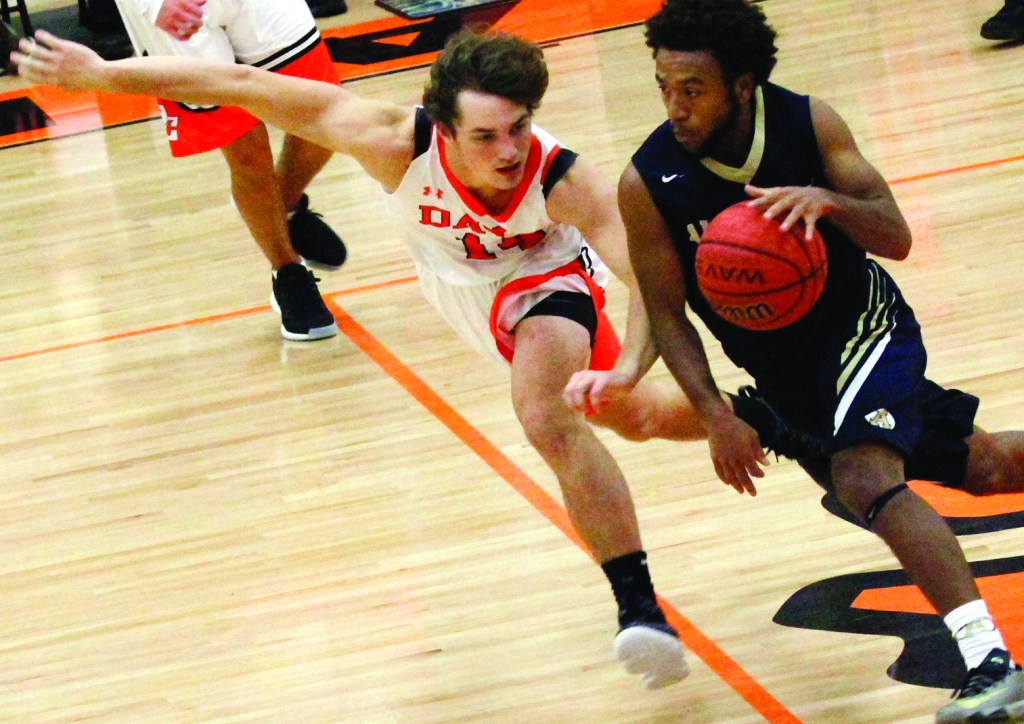 Senior Mason Wilson hustles on defense in the first home game at the new school.

Davie’s varsity boys basketball team outlasted West Rowan, 68-63, as Michael Walton and Owen McCormack combined for 40 points. In a 60-44 home win over Alexander Central, Brooks Johnson was electric off the bench, sparking a game-breaking run in the third quarter.

In the game at West on Nov. 28, six players (Johnson, Mason Wilson, Jacob Hendrix, McCormack, Walton and Cooper Wall) were involved in a 15-3 run that gave Davie a 25-15 lead. But this was a game of runs, and West pulled within 28-23 at halftime.

McCormack’s 3-pointer, Walton’s layup off a feed from Troy Griggs and Hendrix’s 3-ball had Davie in front 50-40. That was countered by West’s Payne Stolsworth, whose fifth triple of the second half cut Davie’s lead to 52-49.

Davie answered with a 7-0 run. Griggs hit a tear drop, Wall grabbed an offensive rebound, double clutched and scored inside, and McCormack found Walton for a 3 as Davie rebuilt a 59-49 lead.

Then West’s big man, Caleb Mauldin, went to work. He scored 12 straight West points, and his second and-one of the spree tied the game at 61 and resulted in McCormack’s fifth foul. Davie was without its 6-foot-8 junior with 1:33 to play.

McCormack left with 19 points and three 3s. He had 20 in the previous game.

“Owen’s huge for us,” Davie coach Mike Absher said. “He protects the goal. My first concern when he fouled out was guarding the paint, but he’s also a scorer. He’s got a great basketball IQ and we need him on the floor at that time. We threw Elijah Wood in there and he did a great job.”

Mauldin, who is also 6-8, finished with a game-high 29 points. “We knew Mauldin was going to be a tough matchup,” Absher said.

Walton and Co. did not let Davie fold with McCormack on the bench. Walton drove to draw a foul and hit a free throw. When his second attempt missed, Hendrix snatched the offensive rebound. Then Walton beat his man on a drive and scored with his off hand (left) to provide a 64-61 lead.

Walton finished with a team-high 21 points, the same number from the first game. He hit three 3s, grabbed eight rebounds and handed out five assists.

“His drive with the left hand was huge,” Absher said. “With his experience, he waited for the right time to try to get in the paint. He made a big 3 during a stretch when it was crazy. He does a lot of little things, too. He just continues to grow as a player.”

After Walton’s lefthanded basket, West threw it away and had to start fouling and hoping Davie would miss from the line.

Davie did not cooperate. Wall and Walton both hit two free throws in the closing seconds to ice it.

“West is a tough place to play,” Absher said. “It was a great win for us. We made the right plays, some great finishes, at the end. We hit free throws and had just enough stops to pull it out.”

West fell to 0-2 and lost to Davie for the fourth time in a row.

Wall was perfect from the line (6-6) to score 10 points. Not counting the January 2017 game when he suffered a season-ending injury, it was his 13th straight outing in double figures. Hendrix had eight points. Griggs compiled four points, five assists, four steals and four rebounds. Johnson, Wood (four rebounds) and Wilson had two points each.

Perhaps the best thing about Davie’s 60-44 win over Alexander Central in the first game in its new home on Dec. 1 was that the War Eagles rolled even though Walton, McCormack and Wall had season lows in points.

It was 27-17 Davie at intermission. The Cougars opened the second half with an 8-0 burst, and later their three-point play inside shaved the margin to 32-28.

AC was in the game. And then it wasn’t. The reason was Johnson, the kid who’s been obsessed with basketball all his life. Wall was inbounding on the baseline when he whipped a pass to the right wing. Johnson swished the 3. After McCormack rebounded on the defensive end, Griggs spotted Johnson on the right wing again. His 3 was true again. Wood rebounded an AC miss and Wilson decided to hoist a 3. Splash. On the next trip down, Johnson let another 3 fly from the right wing. Same result. The sophomore’s third straight 3 produced 44-28 separation, and AC was toast. The kid hit one trey in the second quarter, making him 4-for-5 from long range on the night. He found his rhythm after scoring four points across the first two games.

“He is such a good shooter,” Absher said. “We know he has the potential to do that. All three of those were right on; I had a great view from the bench. We want him to shoot those shots. This week we were trying to get him to hold still a little bit and stay with his shot, and boy, he stayed with those three and buried them. He was a little quick (in the first two games). We said: ‘Shoot it and hold it.’ He listened, did what we asked him to do and the next thing you know, he’s a game-changer.”

Hendrix scored 13 season-high points. Johnson did all his scoring (12) from distance. Walton had 10, Wall nine and McCormack eight. Wilson and Wood had three each and Broc Barnette two.

Davie dropped 12 triples on the outmanned Cougars (1-2). Besides Johnson’s four, Hendrix hit three, Walton two and Wall, Wilson and Wood one each.

“We practice them, no different than the past two years,” Absher said. “Sometimes we just have to figure out when it’s the right time to get a piece of the paint and get a post entry.”

Absher was pleased with the way Barnette and Wilson performed off the bench in both halves.

“They gave us some big minutes in the first half,” he said. “Owen was in foul trouble and we worked around that. In the second half, those guys gave us a good burst.”

Davie got revenge for last year’s 65-63 loss in Taylorsville.