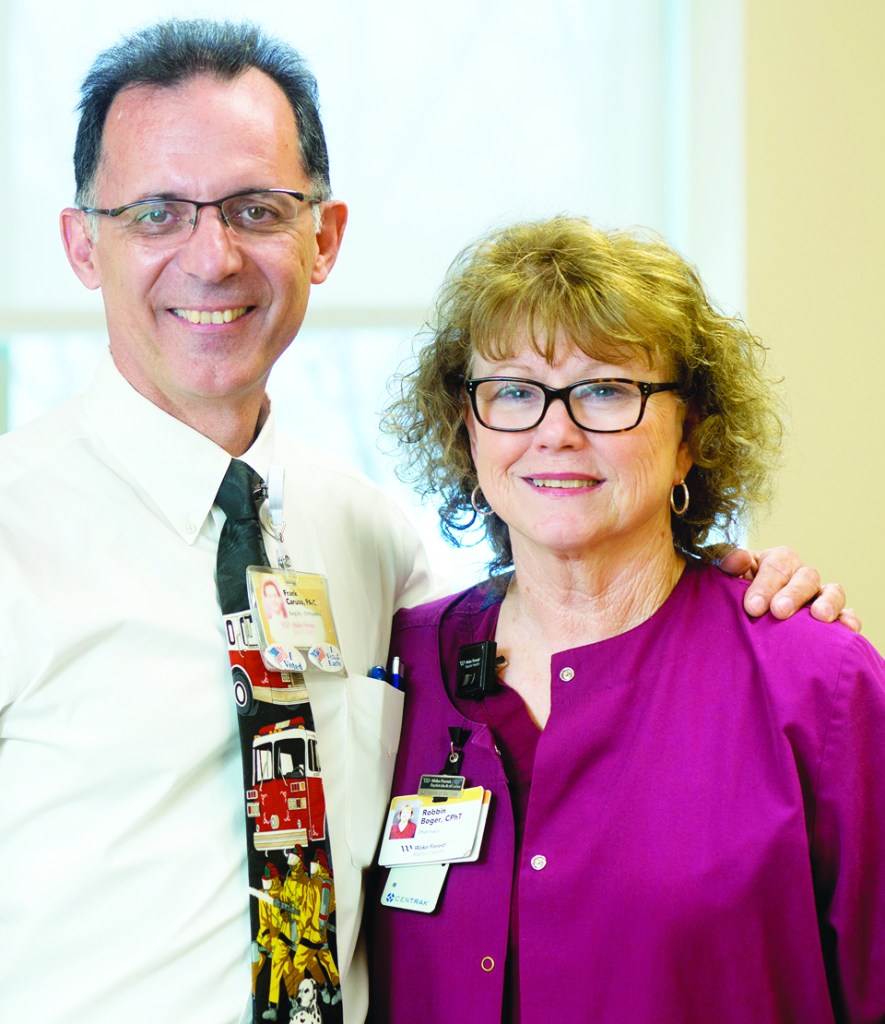 When Hurricane Maria stripped away the homes and lives of the people of Puerto Rico in September, most Americans wished there were something they could do to help.

In Davie County, skilled and generous folks found a way.

Caruso, a physician assistant in orthopaedics, is deputy commander of the NC-1 Disaster Medical Assistance Team (DMAT). Boger, a pharmacy technician, also serves on the NDMS.

“When I went on my first deployment, it was unnerving,” said Boger. That was in 2005, the year of Hurricane Katrina. NC-1 was sent to Memphis to stage the night before the storm hit, then traveled in a large convoy of power company trucks and road crews clearing the way to Mississippi to assist a hospital in Gulfport.

When they arrived, patients were lined up outside the hospital waiting for care, and the team went right to work, from 7 that night until 7 the next morning.

“But NDMS has such good systems. We were safe and had a place to get some rest, food and shelter, and I learned to get over my nerves.”

Boger does not fit the movie image of a rescue hero stalking danger and shouting orders. She’s petite, soft-spoken and calm – a North Carolina woman more at home playing with her grandkids than handling triage in the chaos of the tropics. But like the team in NC-1 and her Davie Medical Center teammates, Boger is driven “to do what must be done, and let people know you care about them.”

A physician assistant, Caruso is also a volunteer firefighter paramedic. At age 60, he surprised the young guys in a military unit by not flinching when whole cases of water were thrown at him while offloading a Chinook helicopter. Caruso has been involved in disaster relief efforts for 24 years, including efforts in New York City after the horror of Sept. 11, 2001.

The National Disaster Medical System, part of the Department of Health & Human Services, is activated when disaster overwhelms state and local resources. Bands of professionals from across the U.S. come together to provide medical and surgical care. Some also contribute veterinary services, give fatality management support and more.

“We are treated like military—deployed for up to 30 days, but usually stay for about 14. The Puerto Rico deployment was 16 days,” said Caruso.

Caruso’s unit started in San Juan and then worked all over the island. They traveled by helicopter and handled needs assessments by visiting shelters, homes, churches and medical units. He and Boger had translators from local “force protection” units. Security also included the FBI and federal police of Puerto Rico.

“It was heartening to be part of such a massive display of assistance: The Army, Navy, Air National Guard, FEMA…so many others. The skies were filled with helicopters: Ospreys, Blackhawks, and Chinooks,” Caruso said.

“I met two New Jersey turnpike police officers who were guarding the door of a Walmart. And the New Jersey state police department had donated 40 cars from their fleet.”

Teams from multiple states joined the Puerto Rican relief effort. The North Carolina unit replaced one from Florida, and Minnesota units replaced the one from North Carolina. Boger had been sent to work with a unit from Arkansas.

Boger’s group was set up in tents at the Centro Medico Hospital, and they transferred patients via ambulance to the Military Sealift Command hospital ship USNS Comfort. The mobile hospital tents were air conditioned, but team members had to take cold showers in contaminated water.

Boger mostly dispensed antibiotics, ointments and medications for nausea. An electronic records system was available, and when Boger entered information into the computer, the information had to be translated into Spanish. One doctor made a hand-drawn anatomy figure with parts of the body labeled in Spanish.

“My job was to work in the pharmacy unit,” Boger said. “We also tried to assess how many patients would be waiting, what challenges they had that were not yet known—mostly they needed water, local hospital supplies, and news of when FEMA would reach them.”

Caruso recalled the level of infrastructure damage. “Every phone pole, every wire, was on the ground. It was hot and muggy, but the Puerto Rican people were very resilient, very appreciative,” Caruso said.

“Puerto Rican people take very good care of their families,” said Boger. “You’d find, for example, that a patient might come from a four-wall, concrete block house, but his diabetic wound would be perfectly clear because the family had taken good care to keep it from getting infected.”

Volunteers worked 14-hour shifts, then rested at a convention center (the Centro de Convenciones de Puerto Rico), where 300 to 400 volunteers slept on cots. They had to take precautions against the threat of the Zika virus from mosquitoes, applying DEET every day and wearing long sleeves.

Boger and Caruso were inspired by the close-knit Puerto Rican families and how thankful they were for the North Carolina team.

Boger remembered one patient in particular: “Three days after being seen in our unit, she came back with a bag of ice for us. She told us in Spanish that she had stood in line a couple of hours to get ice, and she brought a bag for us. And one gentleman just wanted to sit and pray with me.”

Boger said the volunteers would play with the children, blow up balloons for them and the kids would giggle and laugh— “no translator needed for that.”

The local staff members brought them great Puerto Rican coffee, and when it was time for the North Carolina unit to leave, their island co-workers prepared them a meal.

Back at home, Boger’s team at Davie Medical Center was supportive. “They covered for me and supported me and the work we were doing in Puerto Rico. They were a big part of helping those hurricane victims, too.

“When I thanked them for being so kind and understanding, they said, ‘We were only working eight-hour shifts—you were working 14.’”

When asked how she did it, Boger said, “You do it because you have to. When you get that feeling inside that you’ve helped somebody, you just want to do more.

“I can’t tell you how many people just needed a hug. They’d lost everything, yet they still smiled and kept saying ‘thank you.’”

Caruso also praised his Davie Medical Center co-workers for their sacrifices. “The cooperation of our team helped make our service to those folks possible. It warms my heart.”