Thank you to Davie veterans 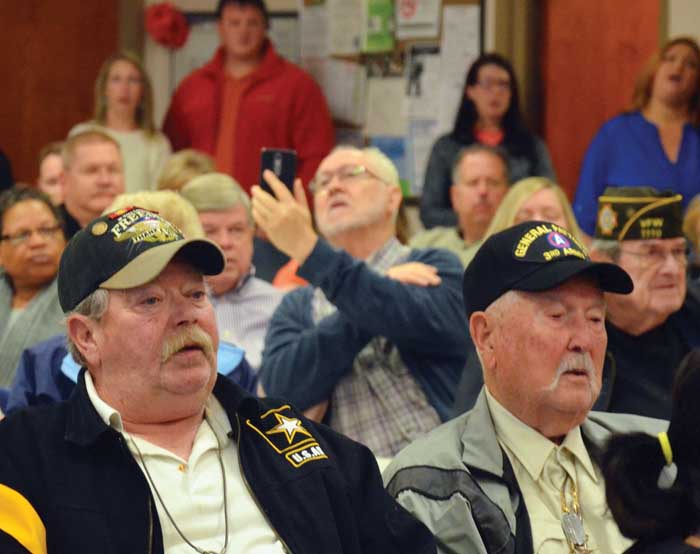 Davie veterans were honored Saturday at the annual Veterans Day celebration, moved indoors to the Davie Senior Services building because of the cold weather.

It included plenty of music and applause, all directed at the veterans and their families, as a thank you for their sacrifices and bravery.

“It’s a great honor that I get to take part in this,” said Jennifer Middleton, who along with Ben Chapman, sang patriotic songs for the ceremony. “Because of your service, I get the freedom of worship … to proclaim how good God is to me.”

When they sang “Proud To Be An American,” just about everyone in the full room stood and sang or clapped.

The Davie High School War Eagle Wind Ensemble played several songs, including the theme songs for each branch of the military, and those who served in that branch stood while the song was playing. They closed the ceremony with “Taps.”

It has been some 30 years since the veteran’s monument was erected on the square in Downtown Mocksville, including the names of Davie residents who had died in war. “Thank God, no new names have been added,” said Judge Jimmy Myers.

He referenced the four oak trees on the square, that have been replaced with small, young trees. “It will be the blink of en eye before those oak trees are large. It’s going to happen.” The oak trees of the past witnessed the goings on – good and bad – in Mocksville, and the new trees will do the same, he said.

Myers asked people that everytime they walk by the tree closest to the monument, to say a prayer. “Give thanks, and ask for God’s blessing … for the families, for this country. It’s a little, scrawney tree right now, but that tree is being dedicated to the memory and honor of all people in Davie County who served, and their families.”

Myers knows well the heartache caused by war. More than once, as a chaplain, he had to tell families that their loved ones would never be coming home again.

“Thanks to all of you veterans,” she said. “I appreciate the ability to be up here – speaking English – worshipping the Lord of my choice.”

Walk your dog through Festival of Lights