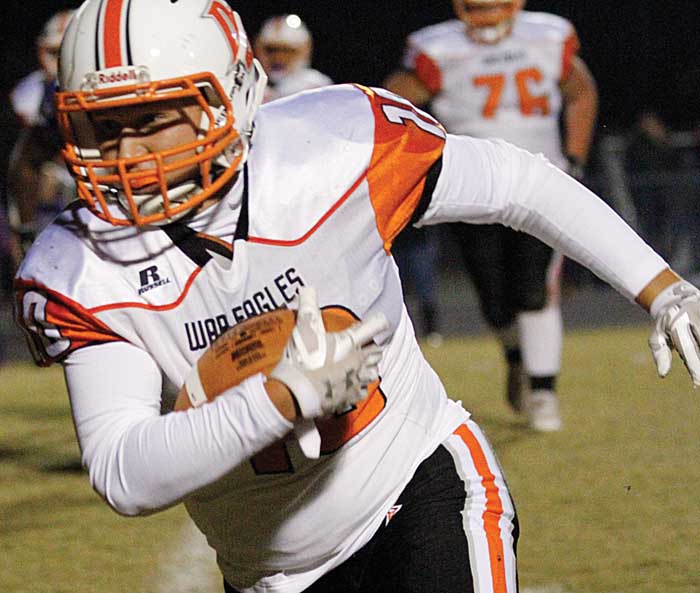 Senior Ben Edwards runs toward the corner of the end zone for a touchdown.

Full credit to the eighth-seeded Pirates, who improved to 8-4 with their fifth win in six games. They did what they wanted on offense, rushing for 363 yards, averaging 6.4 yards per clip and not punting until the final two minutes.

Junior quarterback Grayson McCall ran the flexbone spectacularly, rushing for 64 yards and mixing in five completions for 127 yards. Jaylen Coleman (23 carries for 152 yards and four touchdowns) and Malcolm Hines (11 carries for 100 yards) ran wild. McCall and his backfield friends ran east and west, and they ran north and south against a Davie defense that came in allowing just 2.2 yards per rush through 11 games. Davie was allowing 108 rushing yards a game. Porter Ridge more than tripled that number while pounding out 56 rushing attempts.

“It’s hard for us to replicate the speed at which they execute that,” Davie coach Tim Devericks said. “They’ve got a lot of weapons in the backfield. (McCall’s) a physical runner. It was really tough to control all three phases (of the triple option). And they’re good up front, so that makes their backs so much more dangerous when they have a head of steam to work with.”

The Pirates dominated out of the gate, taking the game’s first possession and driving 75 yards to the end zone in nine running plays.

“We executed and established the line of scrimmage,” Porter Ridge coach Mike Hertz said. “We knew they were a physical team. We had to match their physicality, and I was real happy with how we did that.”

Davie’s offense went three-and-out. On the second play of PR’s second possession, McCall presented an option-run look before attempting his first pass of the night. Keon Polk was running free down the seam, resulting in a 60-yard TD. Davie was in a 14-0 hole.

“We were (concerned about the occasional pass), but that was a chance we were willing to take,” Devericks said. “We had to be able to put as many in the box against an attack like that.”

“(McCall’s) a dual threat and he’s really worked on his decision-making,” Hertz said. “We’re thrilled because it gives the defense a lot of things to think about – plus the fact that he could throw the ball on every snap. That’s how good he is.”

Davie quarterback Josh Hall stood tall and found 10 different receivers/backs while going 27 of 45 for 329 yards. He tossed four TD passes, and his only interception came on the game’s final play.

On Davie’s second series, Hall and Cooper Wall connected on a post route. Wall broke a tackle at the Porter Ridge 35 and showed off his speed. He reached the PR 2 for a gain of 57 yards. On third-and-goal from the 4, Ben Summers caught a short pass and dove for the left pylon to put Davie on the board. It was 14-6 after Skyler Schoppe’s PAT was wide right.

Unfortunately, the first TD of Summers’ senior year aggravated an injury that would end his night early. Sophomore Zach Smith, a JV call-up, replaced him at H-back. Anthony Deters replaced him at punter. Hall replaced him as holder for PATs.

“For two weeks, Ben has been battling a big knee contusion,” Devericks said. “When he scored the touchdown, he came down awkwardly. He’s pushed through so much. When he took another shot on it, it was hard for him to recover from that.”

The Pirates used 11 running plays during a 12-play, 68-yard scoring drive, including a 27-yard reverse. After Davie went three-and-out and the injured Summers got off a short punt, they went 42 yards and scored on the 10th running play.

“(McCall) doesn’t try to do it all himself,” Hertz said. “He relies on his running backs and his reads have gotten a lot better. The last part of the season he’s gotten real comfortable running the triple option and the rest of our offense.”

It was four possessions and four TDs for the Pirates, who led 28-6 with 4:24 remaining in the first half. It would get worse on the ensuing kickoff. Wall was stood up but the whistle didn’t blow. A Pirate came out of the pile with the ball and waltzed 21 yards to the end zone. The gift gave PR a 35-6 lead.

A first-and-26 play was a telling moment. Hines took an option pitch around left end and dashed 58 yards, cornerback Mason Wilson preventing a TD with a tackle on the sideline. But Jared Wheatley, who went 7 for 7 on extra points, was wide left on a 32-yard field goal try.

Despite the demoralizing 29-point margin, Davie battled back as Hall and the passing game found a groove. Completions to Josh Robinson, Wall and Wilson moved the ball from Davie’s 20 to PR’s 6. On third down, Hall dropped the ball as he looked left to Wall. He calmly picked it up, looked right and lobbed a TD to a wide-open Wilson.

The seventh TD of the half – unfortunately, PR owned five of them – cut Davie’s halftime deficit to 35-13.

Early in the third, Hall and running back Robinson failed on an exchange or play-action, the fumble teeing up PR’s offense at the Davie 32. Four plays later, it was 42-13.

But the War Eagles did not pack it in. Hall went 5 of 6 during a 77-yard drive, including three completions to Wilson, who absorbed a penalty-inducing hit in the end zone but still secured a 12-yard TD. Freshman Beaven Arey, who replaced Schoppe as kicker in the second half, converted his first varsity PAT.

On the next play from scrimmage, Davie defensive lineman Anthony Olmedo recovered a fumble at the PR 19. On fourth-and-3 from the 12, Wall scored on a slant route. Arey split the uprights again to pull Davie within 42-27 with 5:33 left in the third.

“Our guys never stopped battling,” Devericks said. “We just had an uphill battle from the 14 points that we spotted them. At halftime we told them: ‘We want to see what they do when the pressure comes.’ And we were almost to that point.”

Two TDs in 92 seconds gave the War Eagles reason to believe, but they had no margin for error. Austin Richardson’s 39-yard reception on a third-and-6 play deflated Davie’s chance for a miraculous rally. Richardson went up against tight coverage and made an absolute monster grab at the Davie 18. Four plays later, Coleman delivered the dagger from the Davie 1, his fourth TD capping a 76-yard drive with 1:41 left in the third.

Davie had a chance for one more score. Peyton Hampton outfought a Pirate defender and ripped down a 35-yard reception. Wilson’s 19-yard catch put Davie at the PR 9. Hall appeared to be down on a third-down sack. The ball came loose late at the 10. All five officials huddled and determined it was a fumble, Davie’s third of the night. Davie fans and Devericks hated the call.

Hall had a stellar showing in his Davie finale. The 329 passing yards are the sixth-most in a game in Davie’s 62-year history. Only Chris Reynolds, Garrett Benge, Zach Illing and Adam Smith have had bigger games. It was the 13th time a War Eagle has tossed four or five TD passes. Hall was one from Reynolds’ single-game record. The 27 completions tied a record. Reynolds had 27 against North Davidson in 2015 and 2016. The 45 pass attempts were the most ever. Benge had 44 in a 40-19 playoff loss at Independence in 2006.

“They were trying to load the box,” Devericks said. “We were throwing dink and dunks because that’s what they were giving us.”

Cousins Wall (nine catches for 121 yards) and Wilson (7-88) went out in style. It was Wall’s fifth career game with nine or more receptions. That’s the most such games by a Davie receiver. It was Wall’s 11th career 100-yard game, tying a record with Ben Ellis. Davie’s offense actually had more first downs than PR (22-20). But part of the reason the Pirates tore up Davie was they converted 8 of 13 third downs and two fourth downs.

“We talked about getting (Wall and Wilson) on the same side and let them run some combo routes because they can only defend one of them,” Devericks said. “Both of them left it all out here on the field.”