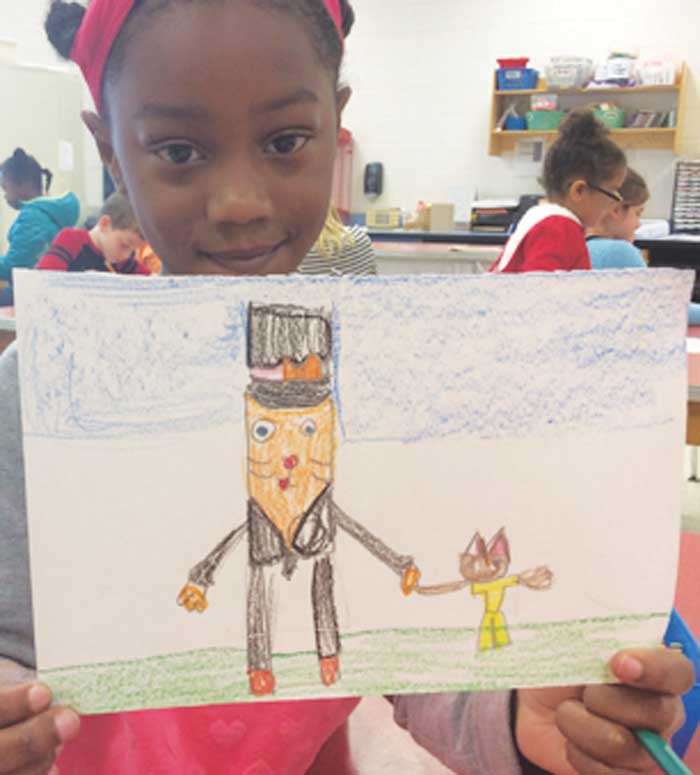 Mocksville Elementary kindergarten students had a special family night,called Letterland Night.  The kinders dressed as their favorite Letterland character and attended a presentation at school. Math has been fun as the students have been doing Kagan activities to learn how to count and how to compare shapes. Writing numbers is a lot of fun when using dry erase markers. Miss Hendrix’s class is a bit behind in Letterland but they are having a blast learning about Sammy Snake, Sally his sister, and about Sammy as he stops for a snooze.  In social studies, students learned how some people celebrate Halloween as well as the fact that some people do not celebrate Halloween. They learned about “The Day of the Dead” and began to compare/contrast this celebration from Mexico to Halloween in the United States.

First grade students in Mrs. Spach’s and Mrs. Hunter’s class are talking about author’s purpose. Students are using the PIE method for telling if an author is writing to persuade, inform or entertain. They are using details from the story to understand the different ways. In social studies, they are learning about types of folklore. Students are visiting Mrs. Marklin, media specialist, as she reads and talks about these types of stories. In math, they are working on place value. Students are understanding what two-digit numbers mean, using base ten blocks to make numbers, counting base ten blocks and writing numbers in expanded form.

Second graders enjoyed a math Halloween snack activity. After a day off, students began addition with regrouping. Stellaluna was wrapped up with a bat flapbook. Mrs. Welch introduced Light It Up to assist in the writing process. Mrs. Marklin taught a sound lesson, and the students had a ball making the xylophone robots play tunes through the Ipads.

Third graders went on a field trip to Bethabara Park and learned about the history of the Moravians and the surrounding area.  They visited a colonial village, learned what children wore in the 1700s, and visited a congregational house (house of worship). They had a great time while visiting the park.

Mrs. Miles’ fifth grade students helped kindergarten buddies with a pumpkin project. In reading, they finished a unit on context clues. They learned a trick to help figure out words they don’t know while reading. Students are working on long division in math. They created an anchor chart in their interactive notebooks to help remember the steps while dividing. They just started the second rotation for science and will be learning about weather.