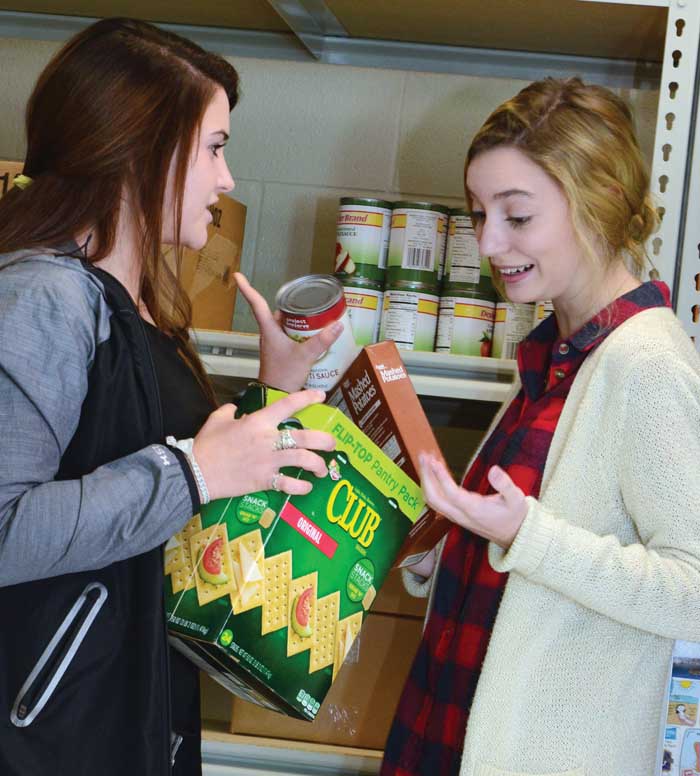 Roughly 40 percent of students, 608 of them, at Davie High School qualify for free or reduced lunch. That means during the school day, those students know where their meals are coming from, but the weekends are another story.

That’s where Hunger Fighters comes in.

Hunger Fighters is a program that provides food for students and their families for the weekend. Jimmie Welch, a teacher and coach at Davie, said the program formed years ago when teachers noticed some students were coming to school on days they weren’t required to be there, just to get meals.

Every Friday, for the past several years, teachers span out across the county, taking bags of groceries to provide and supplement meals for the students and their families over the weekend, but Welch shares he is frustrated there are 608 students who could benefit from the program, yet only about 25 are taking advantage of it.

And he’s not alone.

Lori Smith, parent of a Davie student, has joined forces with Welch and others to garner more interest and increase participation.

“We feel like we should be reaching far more students or families, and we are frustrated people either don’t know about it or just aren’t taking advantage of it. Our goal is to reach more families,” Welch said.

One of the methods Smith came up with to reach more students was to create a food pantry within the school. She and Principal Doyle Nicholson walked the halls of the new school and found a large storage room with shelving that could be repurposed into the pantry. Now equipped with a freezer, the pantry’s shelves are beginning to fill. The school has a partnership with Second Harvest Food Bank, where food can be purchased cheaply and is sometimes offered free, and Smith makes trips there to gather the food that is used to stock the pantry and the weekend bags.

“In the elementary and middle schools, kids have the weekend backpacks but in high school, the kids don’t want to stand out. We wanted to be able to have a place where a student could just stop by when they need to. And we are also talking about expanding it to offer personal hygiene items, toothbrushes, shampoo…whatever someone might need,” Smith said.

The details of how to offer access to the pantry to the students are still being worked out, because while Second Harvest Food Bank requires a head count of how many students are served, because of the confidential aspect of the program, names are not collected, so Smith said they are still figuring out the distribution process.

“The main thing is we want to serve more students,” she said.

Welch hopes one of the ways that goal will be realized is through a school club called Hunger Fighting Students. Still in the process of forming, the club’s main goal will be to create awareness about the program among the student body, through social media, word of mouth, and other avenues. Club members will also meet to pack the bags of food for the weekend.

The only rule for being able to receive a bag is the student must be enrolled at Davie, said Welch.

“That’s it. I don’t care if your parents are millionaires or if you’ve gotten in trouble with the law, whatever. If you are a student at Davie and you or your family need some assistance, that’s all we need to know.”

Welch said confidentiality is “the highest concern” in the program, which is a plus for the families, but also a negative. Federal guidelines mandate the names of students who are recipients of free or reduced lunches must be kept confidential, and even Superintendent Dr. Darrin Hartness said he can’t see the list. Nicholson said he can’t either, so figuring out how to reach the families who might benefit has been the biggest hurdle in moving the program forward.

“I’m 6-2 and I weigh about 300 pounds; I don’t miss a meal so I can’t imagine being hungry, but that’s the reality for many of our students,” said Welch. “There seems to be a misconception in the county that we don’t have people who struggle, but the reality is we have homeless people and people who are hungry. We want our students and their families to realize we want to help. The bags we distribute aren’t always to create a full-on meal, but they can help families be able to maybe put the money they’d spend on food toward another need. We include items like spaghetti sauce and pasta, canned vegetables, oatmeal, canned chicken and tuna, peanut butter and jelly…items they can use to help them with their food budget. And we’ve had success stories, people who have called us and say they are back on their feet and no longer need the program. That’s a great thing to hear, but for the ones who do need the program, we want them to know it’s available.”

Welch said monetary donations are easier to work with than actual food donations, because when they are packing bags, they try to include the same items in all 25 bags, and it can be hard to get donations of that amount of the same item. But Smith said any organizations or individuals who want to help with a food drive or any other method of collecting food in large quantities should know their help will go a long way in alleviating food insecurity.

“Anything donated is greatly appreciated and will be used,” she said.