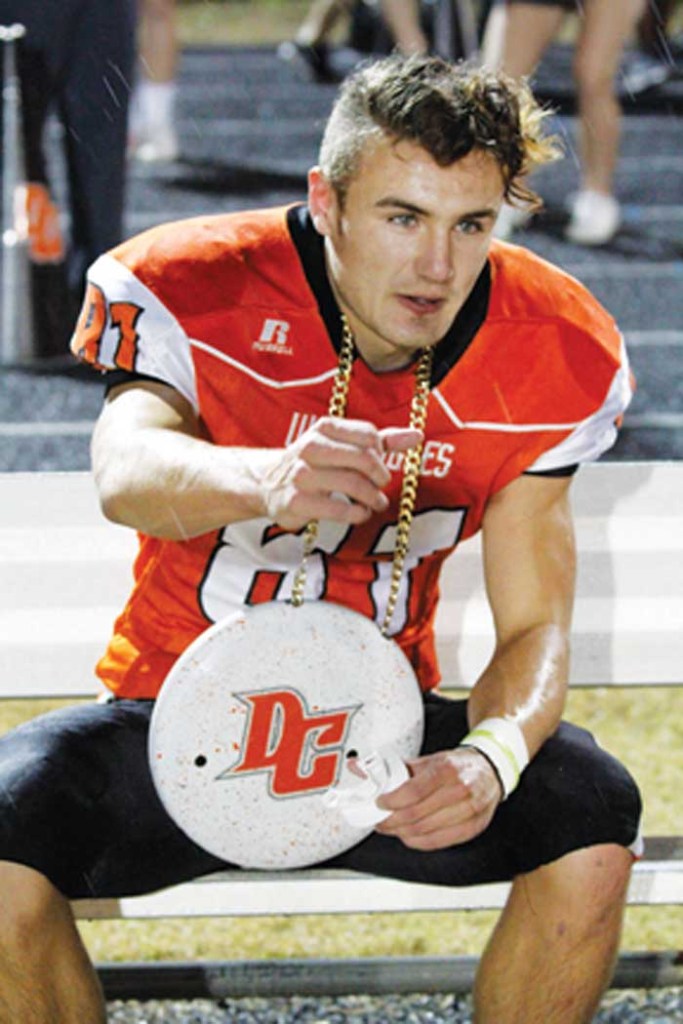 Cooper Wall gets the Frisbee chain for breaking records.

Davie’s football team washed a sour taste out of its mouth and smiled again.

The War Eagles scored 20 points in a span of nine minutes in the fourth quarter, shut out visiting Reagan in the second half and pulled away, 37-14, in the regular-season finale on Nov. 3.

Davie (5-6, 2-3 Central Piedmont Conference) snapped a three-game losing streak and is preparing for the 4A playoffs. The misery level rose for the last-place Raiders (3-8, 0-5).

Davie recovered from a disheartening effort at East Forsyth the previous week and celebrated on Senior Night. One senior (Cooper Wall) broke the record for career touchdown catches. Another senior (Cody Hendrix) closed in on the career mark for tackles.

“Lot of frustrations over the past few weeks,” coach Tim Devericks said. “To come out with a W feels really good.”

Although it ended up being a smooth glide for Davie, things didn’t exactly go according to plan in the early going.

After Davie went three-and-out on its first possession, the Raiders picked up three first downs on their first three plays and whipped out 90 yards in six plays to take a 6-0 lead. Hendrix laid out to block the extra point.

The War Eagles took over on their third offensive series, and biggest key was sophomore running back Josh Robinson, who lowered his shoulder into the teeth of the defense 27 times for 147 yards. With 111 yards in the dreary game at East Forsyth, he became the first War Eagle in three years to deliver back-to-back 100-yard rushing games. (Cade Carney had 129, 106 and 124 in three straight games in 2014.) Robinson’s 147 were the most in 20 games (Adrian Cranfill had 147 at Hopewell on Sept. 16, 2016.) And Robinson had the most carries in 54 games (Carney had 27 against Reagan in 2013.)

“I’ve got to thank my offensive line,” Robinson said of tackles Ross Starnes and Zach Clubb, guards Preston Robertson, Tanner Batten and Owen Brown and center Grant Copeland. “We’ve got some dawgs up there. I trust in every single one of them.”

With Peyton Hampton doubling up at safety and running back, it was a breakout for a team that came in averaging an unimpressive 93 yards on 32 rushing attempts.

On third-and-5 on Davie’s third series, receiver Mason Wilson, who earlier made a catch from his knees, went up high to squeeze a Josh Hall pass 10 yards downfield. Another highlight-reel play for the senior, he broke two tackles and wound up gaining 23 yards to the Reagan 23. He finished with team highs in catches (four) and receiving yards (53).

“I thought it was overthrown,” Devericks said. “He just climbed the ladder.”

Wall achieved his record on a third-and-goal play from the 4. Hall hit him in the left corner of the end zone to cap a 10-play, 61-yard drive. The first of four PATs by kicker Skyler Schoppe gave Davie a 7-6 lead early in the second quarter.

“It was a slant-whip,” Devericks said. “Good timing ball by Josh. Congratulations to Cooper. I know he wanted that record, but I know more importantly, he wanted to get the win on Senior Night.”

Then Davie’s defense overcame a 39-yard pass play. Hendrix nailed the Reagan QB as he threw on a second-down incompletion. On fourth-and-8 from Davie’s 29, Redmond flushed Gabriel Hollingsworth out of his comfort zone and an incompletion followed.

Hall excelled in the first half on underneath, high-percentage passes. On consecutive plays, he hit Ben Summers on a crossing route for 19 yards, Robinson in the left flat for 7 and bought enough time to flip an 11-yarder to Hampton. Then Reagan was guilty of holding Wall on a pass route.

While Robinson was the headliner, Hampton was the closer on two long drives. From the Reagan 10, the big fella covered the distance in four straight plays. On third down from the 2, he slipped by a tackler in the backfield and scored to culminate a 13-play, 71-yard march. Davie was in front 17-6 with 1:44 left in the first half.

“It’s great when they don’t care who gets the credit,” Devericks said. “(Another back) can go in there and we don’t skip a beat.”

The Raiders answered in a hurry, thanks to four chunk plays of 17 yards or more. Hollingsworth dropped a pass just over Hampton, Mitchell Ijames and M. Wilson for a 25-yard completion to the Davie 17. Two plays later, Dwayne Sawyers caught a pass over the middle and scored with just six seconds on the clock. From the muddle huddle formation, Powell scored two points around right end to chop Davie’s halftime lead to 17-14.

“The play before the touchdown, we had three guys around the ball,” Devericks said. “All three were trying to pick it off or knock it down and it falls through all our hands. (On the TD) they ran crossing routes to create confusion for our secondary.”

In the first half, Hall was an efficient 10 of 15 for 102 yards, connecting with six receivers/backs.

“It was hitches and drags,” Devericks said. “The offense was staying patient and taking what the defense gave us. No use forcing it down the field. We’ll take 6 or 7 (yards).”

On fourth-and-1 from the Reagan 35, Davie trotted out the wildcat package. M. Wilson tried to get outside but was swarmed under for no gain.

Ijames and Samuel Hendrix provided a lift by breaking up passes on consecutive plays. Robinson broke a tackle and rambled 41 yards, but M. Wilson lost 7 yards on a third-and-11 play in which he looked to throw on a reverse gadget.

Reagan’s third third-quarter possession ended with a third punt. Then Davie leaned on the ground game to stick a pin in Reagan’s comeback hopes. On third-and-3, Robinson picked up 6 yards. On third-and-6, Cranfill bolted for 12. Then Reagan got a heavy dose of Hampton, who converted a fourth-and-2 with a 6-yard burst. He devoured the final 27 yards on five straight runs. The 14-play, 64-yard drive saw Hampton record his team-high eighth TD and bump Davie’s lead to 24-14.

“Again, I can’t praise the offensive line enough,” Devericks said. “They did a fantastic job all night, especially with some of their exotic blitzes. I mean they were blitzing from everywhere at one point because they knew we were trying to run the ball.”

“They stunted a lot but you could always tell when it was coming,” said Robertson, who rotates between left and right guard. “They would get up or move. We handled it very well. Communicating is the main thing. All five have to communicate or it’ll go south in a hurry. A lot of teams blitz, but they blitzed in a way we hadn’t seen much. Sometimes they’d stunt and blitz at the same time.”

On the other side of the ball, Hampton, who is playing safety full time now that Broc Barnette is lost for the year with an injury, was tantalizingly close to his ninth TD. Hunter Meacham reached up to knock away a long pass. Hampton grabbed the deflection and headed down the right sideline. A holding penalty behind the play erased a 64-yard return.

When Davie got the ball with 4:32 remaining, Robinson pounded the Raiders into submission. He carried five straight plays. On third-and-2, he shook off a tackler in the backfield and gained 3. On the next play, he carried 172-pound DB Brendon Mills for 9 yards.

“I was feeling unstoppable,” Robinson said.

What gets a little lost in Davie’s run game is Summers, an H-back who threw more than one pancake block and created lanes all night.

“Along with the offensive line, some of the blocks Ben made in there – one-on-one blocks – were able to spring Josh and Peyton,” Devericks said. “He’s taken on that role as a selfless player. He’s a valuable guy to our team. He can do a lot of things. He can catch passes. He’s a two-way player (as a blocker and receiver), and they don’t really know what’s coming with Ben in there.”

After handing off to Robinson for five straight plays, Hall faked the give and swept around right end. He dashed 32 yards to the end zone for his longest run of the year.

Less than a minute later, Davie was dancing in the end zone again. C. Hendrix smacked backup QB Riley White as released the ball. Meacham intercepted at the Reagan 29, accelerated down the sideline and scored Davie’s third TD in a span of 9:07.

“We asked Hunter to do something out of his ordinary this week and play farther outside than he’s used to,” Devericks said of the sophomore outside linebacker. “And I think he did it well. After a few plays, he was able to get in the windows and make plays.”