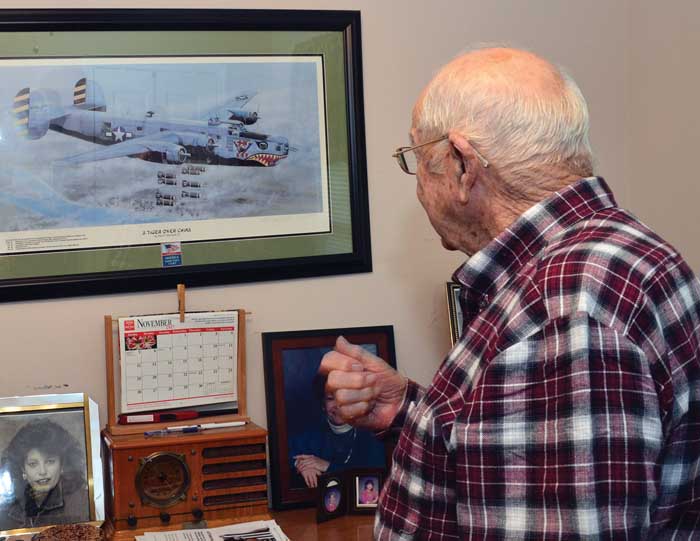 JB Caldwell looks at a print of the Cocky Bobby, the B52 he spent time on during World War II.

Bananas and water got JB Caldwell into the U.S. Army Air Force during World War II.

A resident of Davie County since 1998, the 92 year old easily recalls his time in the war, including the day he volunteered for the Air Force, knowing it wouldn’t be long before he was drafted.

“I wanted to be in the Air Force, but I had never flown in my life,” he said.

He went in on his 18th birthday, and the Army man asked him why the Air Force, and he didn’t have a good answer. But he did pass the test. They told him to go down the hall for a physical.

There was a problem. Recruits had to weigh at least 125 pounds. Caldwell weighed 123.5. They wrote a note on a piece of paper and told him to take it to the mess hall. The sergeant there gave him a gallon of water and a “big bowl” of bananas. “He said ‘eat all you can hold’,” Caldwell said.

Caldwell went to basic training, then began flight training. He remembers his first training mission as a gunner over the Gulf of Mexico, where targets had been placed. That first pilot was talking to someone on the runway when he approached the airplane. The pilot told him to get into the back, and when he did, he accidentally pushed the throttle. The pilot wasn’t pleased, to say the least.

Just before they reached the targets Caldwell was supposed to hit with the .50 caliber machine gun, the pilot would wiggle the wings. The gun rolled on a track, and while up to 128 pounds, Caldwell said it was out of control for a while before he got it locked. Then he fired and fired, and fired.

When the pilot flew back for another shot, Caldwell had spent all of the shells. The pilot flew the plane straight up, then headed straight down toward the water, leveling out right above the ocean.

After that, Caldwell had to take the gun apart and put it back together – in the dark. A farm boy who was no stranger to mechanics, that part he mastered.

Caldwell soon met his fellow members of the crew of 10. He was diagnosed with the mumps just before deployment, and had to receive special clearance.

On all flights, they had no idea where they were going until they were in the air. “We didn’t even know where we were going until we got to China.” A member of the 14th Air Force, all missions on the “Cocky Bobby,” which they named the plane , were from China. “The Japanese had about all of China at the time, so we bombed them there.”

On one mission, the Japanese shot out the hydraulic system on the B52. The pilot told the crew to find the two best parachutes, and tie them tightly at the windows. After cranking down the wheels, he told them to throw the parachutes out the window as soon as the wheels hit the ground. They did, and the plane stopped just short of the end of the runway.

Caldwell likes to tell the light stories like these from the war, but his service on 36 combat missions in the China-Burma-India Theater and seven non-combat missions earned him a Bronze Star and Distinguished Flying Cross, for the time he shot out a steam engine on a Japanese troop train.

“I didn’t get a scratch,” he said of his time in the war. “I must have had a guardian angel on my shoulder.”

After 36 missions, he was due a month’s vacation in the United States, and the war ended while he was headed back home.

He came back to Texas, where he had grown up on a tenant farm, and got married. He and wife Mary Lou had two daughters, and he worked for more than 31 years. In 1998, he moved to be next to his daughter, who had migrated to rural Davie County.

He still attends veterans events, and speaks to students about his time in the war.

And those bananas? He’ll still eat one every now and then, but he knows his limit.