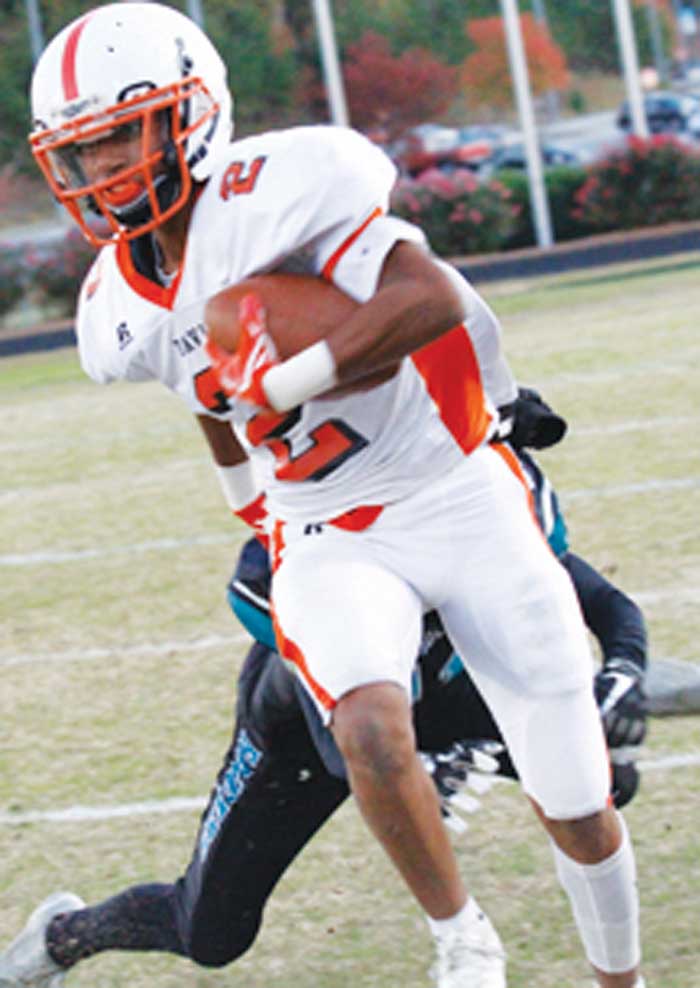 Davie’s JV football team hung on for a hard-fought win, 21-20, at Reagan in the season finale on Nov. 2.

The War Eagles rallied down the stretch, winning three of four to finish 5-5 overall and 3-2 in the Central Piedmont Conference. They raised their game several notches after going 3-7, 1-5 in 2016. While East Forsyth went 5-0 in the CPC, Davie and Reagan tied for second.

“That’s the highest finish we’ve had since I’ve been head coach, so I’m excited about that,” third-year coach Blaine Nicholson said. “We’ve had some tough years, so this is big. This year’s crop is going to be huge (in the future).”

Davie survived by turning back a two-point conversion late in the fourth quarter. “It had you on the edge of your seat the whole time,” Nicholson said.

The Raiders struck first. Freshman linebacker Trevor Richardson made the first big play on defense by blocking the extra point to keep the deficit 6-0. It may not have seemed like a big deal at the time, but man did it loom large in the fourth.

“They weren’t ready for him to rush through the middle of the line,” Nicholson said. “He stuck his paw up and blocked it. Trevor gives all-out effort all the time. Athletically, he’s not the most gifted. He’s a James Boyle-type player in that he’s very smart. He’s really strong and thick, but his effort is what puts him above the rest. And it showed up on that play right there.”

Aided by a Lenny Adame block, Anthony Deters returned the kickoff to near midfield. On third-and-long, quarterback Nate Hampton found Deters for a 17-yard touchdown. It was a fade pass to the corner of the end zone.

“It was a perfectly thrown ball and Deters did a good job adjusting to the ball,” Nicholson said.

Check this out: Starting kicker Jonas Frank was sidelined and couldn’t play. Freshman Beaven Arey, who hadn’t kicked all year, stepped in and went 3 for 3 on extra points. How about that? Also give credit to snapper Avery Taylor and holder Alex Ratledge.

“We put Beaven in (Wednesday),” Nicholson said. “He missed only one field goal in practice and it was because the hold got fumbled. Beaven has been practicing punting all year. He kicked the heck out of it (at Reagan). I was really proud of him because he got thrown into a new situation. Beaven is a baller. He was making 30-yarders in practice. He acted like it was not a big deal at all. He just goes out there and plays ball.”

Reagan downed a punt at the Davie 4. Moments later, Davie scored on a play that ought to be on YouTube – a 96-yard pass from Hampton to Deters, who got loose on a crossing route.

“Deters makes a couple moves and got great downfield blocking from Ratledge,” Nicholson said. “It was an electric play. It’s like coach (Chris Callison) always says: When receivers are blocking downfield, big plays happen. We got great stalk blocks today by our receivers. Without downfield blocking, he’s not going 96 yards. Coach (Todd Bumgarner) made a great call. We had good protection because it took a while to develop.”

Davie led 14-6 at halftime, but Reagan scored in the third quarter and tacked on a two-point conversion to tie the game at 14.

Davie faced adversity in the backfield. Ben Crenshaw exited with an injury after getting hit out of bounds. Davie was furious a late hit wasn’t called. Later, Kristian Lyons went out with an injury. Joe Johnson moved from nose guard to running back and Davie kept chugging. Johnson scored on a 5-yard run to give Davie a 21-14 lead.

But Davie had to hang on. The Raiders answered with a 12-yard TD run with 2:21 to go. Now it was 21-20. They called timeout and decided to go for two and the win. Earlier, they converted a two-point play on a jet sweep. They tried the jet sweep again. Talk about a nervous moment.

“This time our guys played it up perfectly,” Nicholson said. “The guy tries to cut it back and ends up losing 20 yards. We swarmed to the ball with great passion.”

Matt Hill, Isaiah Cuthrell and Co. came through on the play that secured Davie’s hairbreadth victory.

“It was to Hill’s side and he made it bubble,” he said. “Cuthrell came up, activated and made him cut back into the defense by beating his block. Then here comes Hill, MJ Holleman, Caleb Steele and Shamarr Hairston.

“It was a big-time game. It was a team win. This is one of the memories they’ll take with them going forward.”

“I think Shamarr had his best game,” he said. “Caleb is going to be a big-time player down the road. He’s going to be a Jalen Redmond-type but probably thicker. MJ played really well. He’s got great closing speed in space. Hill loves it and I’m super proud of him. Isaiah was coming up and fitting on the run. He’s made immense improvements.”

Seniors end the year with bingo