Volleyball season ends in third round 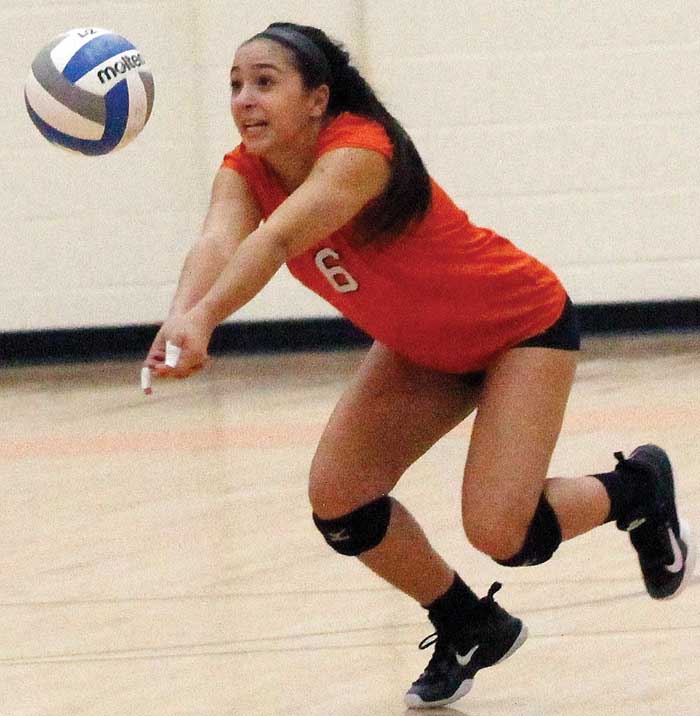 Davie and Reagan played a hyped-to-the-heavens fourth meeting of the volleyball season in the third round of the state 4-A playoffs. And two of the top teams in the state put on a show for the fourth time.

When Davie seized a two-sets-to-one lead, there wasn’t any panic on the Raiders’ side. There was calm and total confidence. After all, they’d overcome 2-1 deficits in the regular season and conference tournament.

They did it again in Pfafftown on Oct. 26. They won the final two sets to beat Davie for the fourth time and end a special season for the War Eagles.

Davie and Reagan were battling each other in the final 16, which made no sense with Reagan ranked No. 1 in 4-A by maxpreps.com and Davie ranked No. 2.

“I wholeheartedly believe that was the West Regional final right there,” Davie coach Amber Brandon said. “It’s hard to punish either team – no matter how the conference played out – with not giving the second-place team the No. 2 seed (Davie was seeded eighth, Reagan first).”

“This should have been, at a minimum, a regional semifinal if not a regional final,” Reagan coach Doug Balser said. “The seeding process has to be re-looked at because I really feel like Davie gets cheated out on this. This was the highlight of the West (bracket).”

Two days later at Reagan, the War Eagles got off to a great start, winning the first set 25-21.

When Emma Slabach served an ace, the lead was 6-1 and Balser called timeout. When Lauren Grooms teed up an Abby Wilkins kill, the lead was 16-8 and Balser called another timeout. Slabach’s big hit made it 18-10. Reagan responded with a 10-5 run to cut the margin to 23-20. When Zoey Clark scored with finesse, Davie had a 24-20 lead. When Reagan’s hard hit sailed past the back line, the first set was in the books.

“Going 3-0 against Davie earlier this year worked against us,” Balser said. “Because our girls were scared. Our girls played that first set not to lose. We jumped them over here a little bit. When you’ve got a team like Davie on the other side of the net, you’ve got to play to win or the game’s over. Tyra (Galloway) was amazing – seven or eight kills in the first set alone.”

Indeed, Grooms set up Galloway time and again in the first set. Galloway was doing her thing, sending missiles toward helpless Raiders.

“We talked and we were like: ‘Look, this is all or nothing. Let’s go,’” Galloway said. “(Grooms is) an incredible athlete. I mean she knows what she’s doing. She has no doubt in her mind the team’s capabilities, and that means a lot in a big game like that. She was doing a real good job of getting me the ball.”

In the third set, it was Davie surgically carving up the Raiders. Slabach’s hit barely landed in bounds for a 20-13 lead. But Reagan isn’t the defending 4-A runner-up by accident. It used a 10-4 run to climb within 24-23. Grooms set Galloway for a thunderous kill that ended the set 25-23 – the third time in four meetings that Davie had a 2-1 lead.

The Raiders were not deterred. They jumped to a 6-2 lead in the fourth set. A big swing by Slabach resulted in a point that pulled Davie within 8-7. But Reagan answered with an 8-1 run to make it 16-8. The hosts won the set 25-16.

“We were able to regroup,” Balser said. “We talked about we needed to be more aggressive with our serves and our attacks. We were playing it too safe early on. When we got aggressive, it kept them out of system. When you’re out of system, you can’t get the ball to the middle as well. I don’t know if Tyra had any kills in the fourth or fifth set. She probably did, but it wasn’t like the first set.”

A Kayla Moore block cut Reagan’s lead to 3-2 in the fifth and final set. When a Reagan block ricochetted out of bounds, Davie was hanging around at 8-5. When a Slabach shot landed on the line, Davie was within striking distance at 11-7.

But the end was painful to watch. The War Eagles were having flashbacks as Reagan closed with a 4-1 run to win the set 15-8.

“In the fifth set, I think they were what we were in the first set,” Balser said. “They were afraid to lose.

“I’ll be glad not to see Davie until next year. (Brandon’s) got a great team coming up. Davie is going to be at the top of the conference and making a neat run again next year.”

The Raiders improved to 27-1 and defeated Davie for the 22nd time in as many tries.

Sure, it was devastating to drop the fourth and fifth sets. But it was a fantastic season. The War Eagles went 23-5, matched the deepest playoff run in their 41-year history and finished with two more wins than the previous record-holder. They hung with Reagan all four times, losing 3-2 on Sept. 26, 3-0 on Oct. 12 (all three sets were 25-22) and 3-2 on Oct. 18 in the conference tournament final. The fifth set in that one was 16-14. This was the third Davie-Reagan showdown in 15 days.

“I’m trying not to get emotional,” Brandon said. “Our team is a family. Those kids are best friends. They play club ball 12 months together. So it’s a tough loss. I’ve never not wanted a ride to end so bad.”

Davie had three seniors and one senior starter. It will have nine returners in 2018.

Brandon bid farewell to her ridiculously gifted jumper. Galloway was spare part for Ellis Middle in 2012 and 2013. She has blossomed into a star.

Galloway was a consistent contributor on the 2014 Davie JV team. Brandon was the coach as Davie went 17-4. Galloway transferred to North Surry for her sophomore year. She transferred to Mt. Airy for her junior year, but “I did not get to play at Mt. Airy because of transfer rules,” she said. “I had to sit out my entire junior season.”

In the offseason, Galloway committed to Division-I Charlotte.

“I had an offer from Appalachian and then I got an offer from Charlotte,” she said. “Then I committed and did not go anywhere else. I didn’t finish my visits. After I went to Charlotte, I knew that was it.”

Then Galloway made a heartwarming return to Davie, the perfect ending to her high school career.

“It meant a lot to be able to come back,” she said. “When my mom told me we were moving back, I was so happy I was crying. It wasn’t my decision to leave, but we were in a bad position. I was devastated; I didn’t want to tell coach Brandon that I was moving. But I was so excited when I got to tell her that we were coming back.”

“Tyra and I have a special relationship,” Brandon said. “She came in as a freshman and didn’t know a lot about volleyball. We bonded automatically. She spends every day in my room. So it’s hard for me to see her go.”