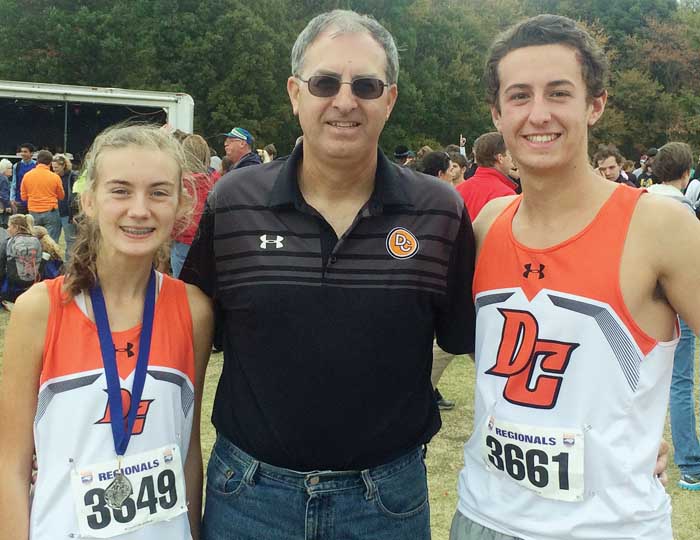 The Davie cross country team returned to Beeson Park in Kernersville Saturday for the Midwest 4-A Regional. Sunny skies and temperatures in the 50’s greeted the Davie girls in the first race of the day at 9 a.m.. Of the 19 schools in the region, 16 were represented in the race. The Davie girls entered the meet seeded ninth and raced to a seventh-place finish. The top-four schools advanced to the state championships.

West Forsyth took home the team title with 40 points. Also advancing to the state meet were runner-up Reagan (65), Pinecrest (85) and Grimsley (117). Hickory Ridge finished fifth (134), followed by Northwest Guilford (191) and Davie (203). The ladies took a measure of revenge against CPC foe Reynolds, which had defeated Davie at the conference meet 10 days earlier as Reynolds finished 10th.

Freshman phenom Carmen Alder of Pinecrest cruised to victory in 18:08, nearly a minute ahead of Reagan sophomore Sophie Faircloth. Davie sophomore Emerson Frantz punched her ticket to the state meet by finishing as one of the top seven individuals not on a qualifying team. In fact, Emerson was the No. 1 individual qualifier with her 10th-place overall finish. Her time of 19:56 was her second-fastest time ever for the 5k distance.

What’s more, Frantz is the first Davie female to qualify for the state in five years. (Anna McBride finished second in the regional in 2012.)

Next across the line in 44th place was junior Brooke Smith in a personal record time of 21:51. She was followed by senior Emily Pender, whose time of 22:01 was good for 45th. Freshman Savannah Swisher recorded a 23-second PR by finishing 53rd in 22:35. Senior Jill Staley rounded out the scoring with her 59th-place finish in 22:55. Sophomore Paige Riordan finished 63rd in 23:08 and was followed by junior Abby Yount, who was 74th in 23:38.

The Davie boys were among 17 competing teams and entered as the 12th seed. The War Eagles finished 11th with 261 points. Reynolds scored 47 points and took the team title behind individual champion John Tatter, who crossed the line in 15:48, a time 45 seconds ahead of Colin Alexander of Pinecrest. Five teams advanced to the state meet, including West Forsyth (62), Pinecrest (91), Reagan (144) and Page (149).

Clay Summers edged teammate Trey Raisbeck for the final individual state qualifying spot by less than a second in 17:24. The pair of Davie juniors placed 24th and 25th, respectively. Junior Braxton Folmar continued his string of personal record performances. His time of 18:03 was a 14-second PR and was good for 45th place. Sophomore Parker Prysiazniuk was fourth for Davie in 84th place (19:34). He was followed by freshman Nate Brooks,  whose time of 19:38 was a personal best and was good for 85th. Sophomore Conner Walsh rounded out the Davie runners with his 93rd place finish in 20:09.

Frantz and Summers, who is the first Davie male to reach the state since Nick Simmons in 2015, will compete as individuals at the state 4-A championships Saturday, Nov. 4. That meet will also be at Beeson Park.