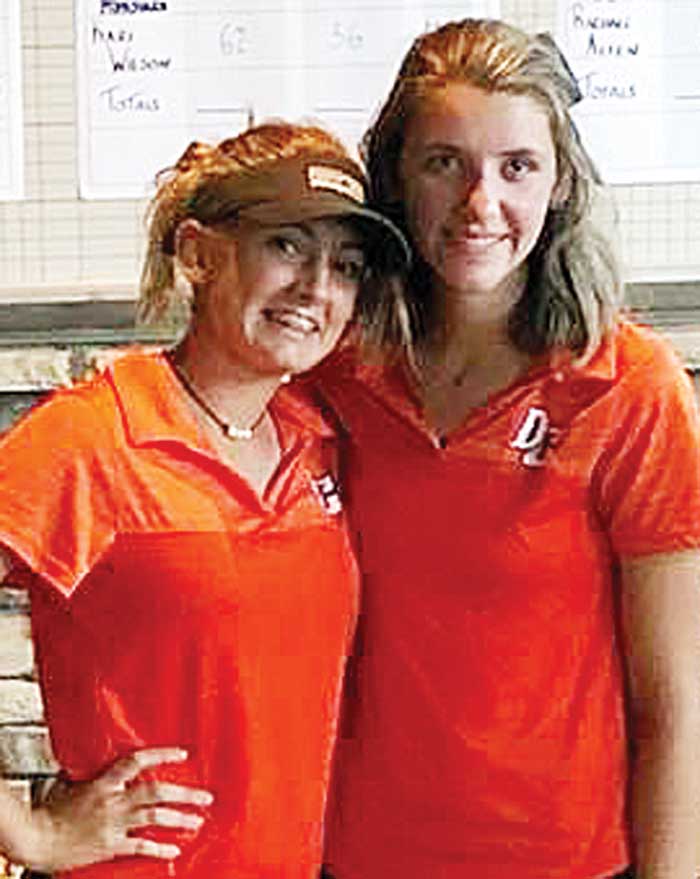 During the Central Piedmont Conference golf season, you saw Reagan and then the Grand Canyon to the rest of the pack. Davie was fourth in most meets, but the regular season was always interesting because of Davie’s stalwarts, senior Brooke Sornig and freshman Kyleigh Harnsberger.

Career-wise, Sornig completed one heck of a ride in the CPC. After finishing ninth in the league in 2016, she claimed sixth this time around, marking her third appearance on the all-conference team. (The top 11 made the team.) It’s the first time a female War Eagle golfer has achieved the honor three times since 2010, when Caitlyn “KK” Brake and Carmen Grubb secured their fourth and third honors, respectively.

Sornig’s 2017 accomplishments are staggering when you consider she hasn’t been healthy all season.

“I wish I could have done better, but I am dealing with my injury,” Sornig said. “I dislocated my thumb and I was in a brace for that for a little over a month. Now I’ve got a pinched nerve in my elbow.”

���It’s one of those injuries that you can play with but it will not heal 100 percent until her season is finally over,” coach Bob Donley said. “It really shows up when she has to hit a shot from an odd stance or bad lie.”

Harnsberger snatched eighth in the tournament with an 89. She’s turned in a classic season for a freshman, becoming the only ninth grader to make the ‘17 All-CPC squad.

She has defied the odds. During her seventh- and eighth-grade seasons at Ellis Middle, there were no hints of her ‘17 value as a War Eagle. She did not break 50 as a Jaguar either season. In fact, she did not break 50 until an August practice before this season. To go from wallowing in the 50s to routinely rolling in the mid-40s in that amount of time is an incredible jump.

“(Coming into the season) I was just going to go out there and have fun,” Harnsberger said. “I honestly did not care if I made regionals or not, because I was a freshman and I was like I’m probably not going to make it. But when they told me I had a chance, I was pretty excited about it.”

Harnsberger is the first Davie freshman to make all-conference in 10 years, dating to Brake’s third-place CPC finish in 2007. For Sornig and Harnsberger, they’re the first Davie duo to crack the top 10 in the CPC since 2010, when Gabby Chaloupkova and Brake took second and eighth, respectively.

“My putting has gotten a whole lot better,” Harnsberger said. “Anne Marie (Goslak) has taught me a lot of tricks to walk off putts. My chipping has improved a lot. I have gained extra yards with my irons, drivers and hybrids. So basically everything (has improved).”

Then there’s the improvement of junior Cassi Shires. Although she shot 112, she carded a 54 on the back – the best nine-hole score of her season.