Davie holds on for CPC win 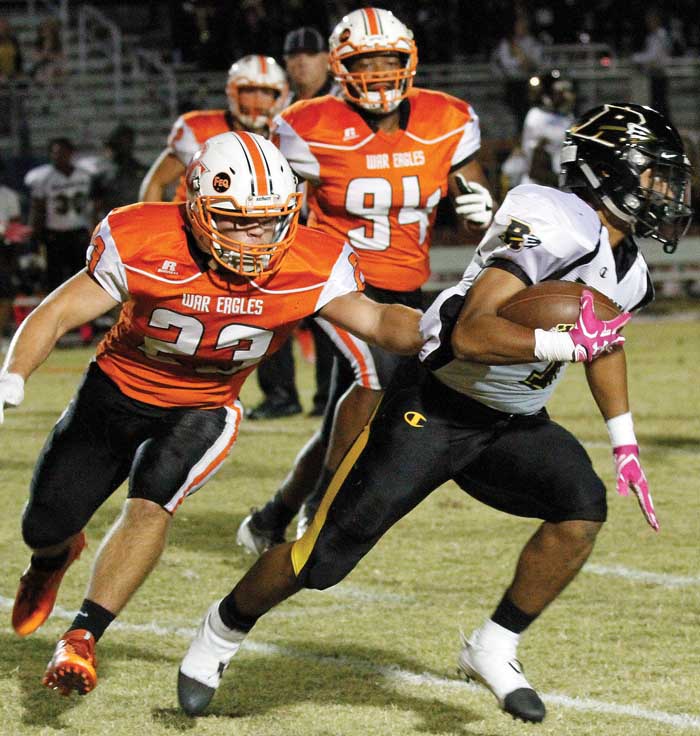 If Davie’s football team had let this game slip away, there might have been furniture destroyed at the new school.

In the Central Piedmont Conference opener Friday against visiting Reynolds, the War Eagles soared to a 21-0 halftime lead and appeared capable of naming the score.

Perhaps the margin was too comfortable. The Demons found life in the third quarter, Davie lost its mojo and it became a 21-13 game.

Then Davie turned potential chaos into an orderly dismantling of the Demons, scoring three touchdowns in 1:45 to pull away again and stomp Reynolds 41-13.

“High school football is so much momentum,” coach Tim Devericks said. “I called timeout to change the momentum, get our kids to relax and not try to get it back in one play. Relax, read their keys and play. And they responded.”

Quarterback Josh Hall bounced back from his six-turnover outing in the final nonconference game, doing a game’s worth of damage in the first half (12 of 21 for 194 yards and three TD passes). In the opening half, he threw TDs to three different War Eagles and connected with six different targets.

“I think Josh watched a lot of film and saw that I can trust the other 10 guys on the field,” Devericks said. “When he does that, he’s successful. When he gets zoned in on one route, that’s when mistakes occur.”

“I was keeping an eye on the safety and my receivers did a great job,” Hall told the Winston-Salem Journal. “I just lobbed it down the field and they went and got it.”

Cooper Wall may own virtually every receiving record before he’s done. He’s simply a beast. But how about his cousin? Fellow senior Mason Wilson is a baller. He made a circus catch on the sideline, hauled in two TDs and finished with 118 yards on five receptions. Wilson also denied passes from his cornerback position.

A Reynolds turnover led to the first points. A Ben Summers punt bounced and hit an unsuspecting Demon from behind and Josh Robinson recovered at the Reynolds 20. On the next play, running back/H-back Peyton Hampton lined up in the left slot and slipped free for a 20-yard TD reception.

“It’s a linebacker read,” Devericks said. “The big phase in college football is RPOs (run-pass option), and that’s what it is. Josh is reading the linebacker and trying to get it inside the safety as well.”

Wilson showed off his skills in a series that ended with Skyler Schoppe’s first missed field goal of the season. First he reached high to snare a slant pass, received a big block from receiver Jack Reynolds near midfield and sped 42 yards to the Reynolds 25. After a chop block sent Davie back 15 yards, Hall sidestepped a blitz and threw high to Wilson, who tightroped the sideline and made a remarkable 20-yard catch as he was falling to the turf. Devericks summoned Schoppe on fourth-and-1, but his 33-yard try was wide right.

On Davie’s next possession, it was Wall’s turn to pierce the Demons. On the final play of the first quarter, he blew past double coverage down the left seam and produced a 41-yard TD.

“That’s a combo route,” Devericks said. “The safety is coming to take another route away and we’re trying to sneak in behind them.”

Reynolds tried a trick play, but safety Mitchell Ijames foiled the plan. Quarterback Charlie Mensh handed off to Rashon Bethea, who gave a reverse handoff to receiver Tobias Johnson. With d-lineman Anthony Olmedo disrupting things, Johnson threw off his back foot. Ijames, who was initially fooled on the play, recovered in time to make a tumbling interception.

“We were beat on that play and Mitchell made a phenomenal play,” Devericks said. “They ran the same play later in the game and got a big play. That was a great diving effort by Mitchell. What was overlooked was Anthony pressuring the quarterback so he couldn’t step into the throw, and that allowed Mitchell to recover. When Mitchell’s in the zone, focussed and trusting what he’s seeing up front, he can make every play we ask him to.”

After Hampton converted a pair of third-and-shorts, Wilson ran a skinny post against tight coverage from Bethea. Hall put extra mustard on the throw and hit Wilson for a 32-yard TD. It was 21-0 with 6:48 left in the half.

“Josh definitely zipped that one in there because it was tight,” Wilson said. “Whenever I made the break on my post, the safety tried to come back and cut it off, and Josh threw a perfect ball.”

“The last game wasn’t his best, and I thought he responded well and was able to make some good reads,” Devericks said. “We were running combo routes and he was reading the safety. The safety was taking the flat route and Josh was trying to fit it in there. Great protection up front allowed him to do that.”

After achieving clear superiority, the War Eagles fell asleep in the third quarter. Reynolds turned to the reverse pass again, and this time Johnson found Will Crowley for 55 yards. On third-and-goal from the 15, Mensh hit a wide-open receiver for a TD. The PAT failed, leaving the score at 21-6.

After Davie’s second straight three-and-out, Mekhi Dunlap made a fabulous catch for a 43-yard TD. Hall and Robinson could not make a clean exchange on Davie’s next play from scrimmage, the fumble giving Reynolds the ball at the Davie 28 with the score 21-13.

This was about to be a little scary for the hosts.

After the fumble, Davie’s defense came up with a clutch stop as Reynolds turned it over on downs. But Davie went three-and-out for the third time in a row and Reynolds had the ball with a chance to get closer.

Davie had one heck of an answer. A 20-0 onslaught down the stretch started when Ijames stripped receiver Dimaggio Wilson and linebacker Matthew King recovered the fumble at the Reynolds 38.

“That fumble really turned it around,” Devericks said.

Four plays later, Hall rolled right. Wilson was completely open in the middle of the end zone for an 18-yard TD.

“When I made my break on my post route, the corner was playing the other third (of the field),” Wilson said. “I guess it was busted coverage because he stopped with me and the safety went down.”

The three-TDs-in-1:45 feast was underway. Mensh looked for Shaheim Revel over the middle, but safety Broc Barnette intercepted. Kinston Whitener and Cody Hendrix delivered blocks as Barnette returned it 23 yards to the end zone.

“Broc was going to cover the curl window,” Devericks said. “Broc read the quarterback, put his foot in the ground and was escorted to the end zone.”

Three plays later, Hendrix hammered another nail into Reynolds’ coffin with a pick-six of his own. Mensh rolled right and attempted a screen pass to his left. Hendrix stepped in front and returned the INT 14 yards. Just like that, it was 41-13.

“Broc was yelling check the screen up front,” Devericks said. “Cody said he was creeping on it because he saw the roll-out but the back coming out the opposite way.”

For good measure, the defense came up with a goal-line stand. After Reynolds’ first 23 rushing attempts yielded a paltry 35 yards, Revel turned a sneaky, delayed handoff into a 51-yard run, the TD prevented by a Barnette tackle at the Davie 2. On first-and-goal, Alex Robinson was stopped at the 1 by Whitener and Hendrix. On second down, Barnette blasted Joseph Harrison at the line of scrimmage. On third down, Whitener and Hendrix stoned Wilson for no gain. Mensh did a QB sneak on fourth down, but nose guard Marvin Delcid and Hendrix stopped him short of the goal line.

“They took a lot of pride there,” Devericks said. “They didn’t want to give up another score. That’s what they talked about when there was an injury timeout (following Revel’s 51-yarder). All 11 of them worked together to make that happen.”