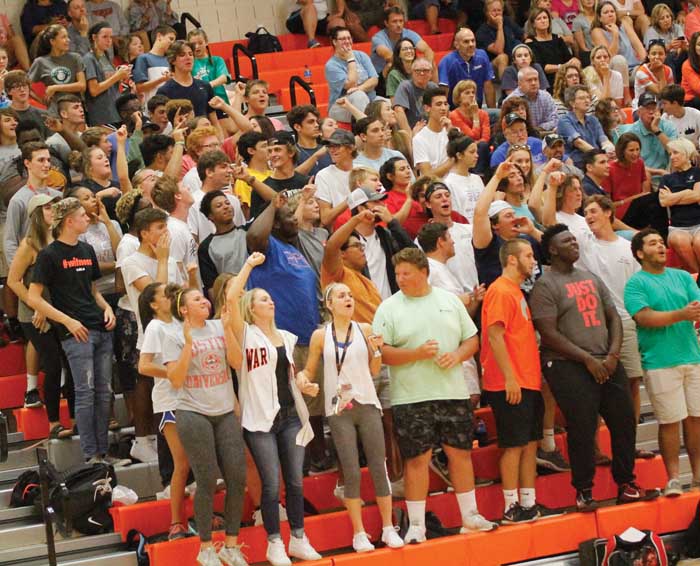 Some 1,000 fans watch the CPC elite volleyball matchup at the War Eagle Gym.

Taking Reagan’s volleyball team to five sets can be akin to going 12 rounds with a heavyweight champion.

In 18 prior meetings, the War Eagles dropped all 18 in three or four sets. But this is a different breed of War Eagles. In the showdown for first place in Davie’s gym on Sept. 26, two unbeaten teams hooked up before a crowd of 1,000 or so fans.

“We had a couple mental mistakes at pivotal times,” Davie coach Amber Brandon said. “The difference in maturity on each side of the net showed. At one point in the final set, after we had made a serious mental mistake, Reagan had four seniors on the court and I had none and I had three sophomores. Skill-wise, they’re phenomenal players. But two years of maturity is a huge difference in a big game.”

The gym was rocking as teams with a combined 32-0 record collided. The Raiders (16-0, 5-0 Central Piedmont Conference) had destroyed all opponents while claiming 45 of 47 sets. They’ve been a power for a while. In 2015 they went 30-1 as state semifinalists. Last year in Doug Balser’s first year as coach, they went 30-3 and finished as 4-A runner-up. Between 2010-16, they either won the CPC regular season outright or tied for first. They have a 15-match winning streak against CPC competition. Their average record the last seven years is 24-6.

Meanwhile, the War Eagles (17-1, 4-1) achieved the finest start in program history. They had been lighting up opponents, capturing 51 of 58 sets.

What’s more, the scene was special.

“It’s one of the best seasons they’ve ever had, and I knew they would have great fan support,” Balser said. “Their student section was fantastic. We knew this was not going to be an easy match. We knew we were going to have to battle. It was definitely the best atmosphere we’ve seen at Davie. I love to see communities get behind their team.

“We’re fortunate that we’re hosting the conference tournament. I’d hate to come back over here and do that again.”

Brandon: “It was really important to our kids. I was so glad the community came out and supported them. Volleyball hasn’t always been huge in Davie. My kids are always on the front row at football and basketball games. It was fun for them to have support. I’ve had so many people tell me they’re fun to watch, and it’s not just because they’ve been winning. They love the game. I’ve never seen a group like this one.”

Reagan seized the first set 25-19, but Davie’s response left its fans in awe. It won the second and third sets 25-21.

“Davie was playing well and we got really tight,” Balser said. “We were making mental mistakes and Davie was smart enough to take advantage of it.

“You start with Tyra Galloway. She has great swings and a lot of power. We knew what we would see out of Tyra. It’s hard to stop her even if you know her. (Setter Lauren Grooms) can really run that offense, and I like their defense. Cara Terry and Morgan Flores are tough. They dug up a lot of stuff and they frustrated our hitters in the second and third sets. Because our hitters were getting swings that they thought should have been kills and those girls were digging it up.”

“Emma had one of the better games that she’s had,” Brandon said. “Emma is super undersized, but she’s going to do everything she can to make it work.

“Kayla really pushed us in the third set. She had two huge swings off the back row when it was 19-19, and she had big digs at crucial times. Kayla and Zoey are sophomores. Tonight was a huge game for sophomores to play in, and they both showed a lot of maturity. Zoey had to deal with  the bigger block. She did a really good job of working through that. For a sophomore, in front of that crowd in that game, that shows it’s a bright future.

“The biggest thing with Morgan is she loves the game. Morgan and Emma, particularly, love the game. Morgan is not the quickest libero I’ve ever seen, but what she doesn’t have in foot speed she makes up for in her mental game. She does a really good job of reading the ball and of being in the right spot.

“In the third set, it was Cara’s serving run that brought us back. In my opinion, Cara and Morgan are the most skilled (defensive specialists) in our conference, if not on any team we’ve played thus far. Cara has a calming presence that is one of the most critical parts of our team. I have a very emotional team. They celebrate and their highs are extremely high, and their lows hurt really hard. Cara keeps everyone under control.”

The War Eagles had Reagan on the ropes, but they left the door ajar, losing the fourth set 25-13.

“In the two sets we won, we made them move,” Brandon said. “We weren’t just trying to kill the ball. We caused some confusion on their side. You could see they were starting to get frustrated with each other, and then we stopped.”

In the fifth set, Davie fell behind 8-2 and never recovered.

“We didn’t want to go five (sets),” Brandon said. “We know anything can happen in the fifth. I had mentally noted that we were down at 15 in three out of the four sets. We played tight. A lot of that is age. We made a lot of unforced errors.”

Down the stretch, Davie was hampered by Grooms’ leg cramps.

“I could definitely tell a difference in her play,” Brandon said. “It was just a bad break for us.”

It doesn’t look like anyone else in the CPC can put up much of a fight against Davie and Reagan. They both look downright scary. And don’t forget: They could meet three more times (once more in the regular season, the conference tournament and the 4-A playoffs).

“Five kids that were in their rotation played in the state championship game last year,” Brandon pointed out. “I think we could meet in the state playoffs. It was a fun run. We were 17-0. Nobody wanted to be 18-0 more than me, but 17-1 is still pretty darn good. We can’t let this define our season.”

Davie’s laser-focused was sapped by the emotional loss to Reagan, and one day later Davie lost in five sets in a nonconference match at West Stokes. The 2-A Wildcats lost 3-0 to Reagan on Sept. 11, but they took advantage of Davie’s “major hangover,” Brandon said. 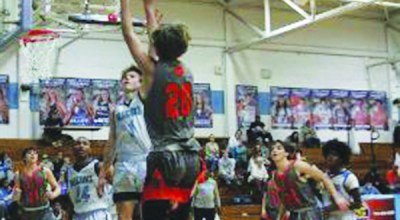