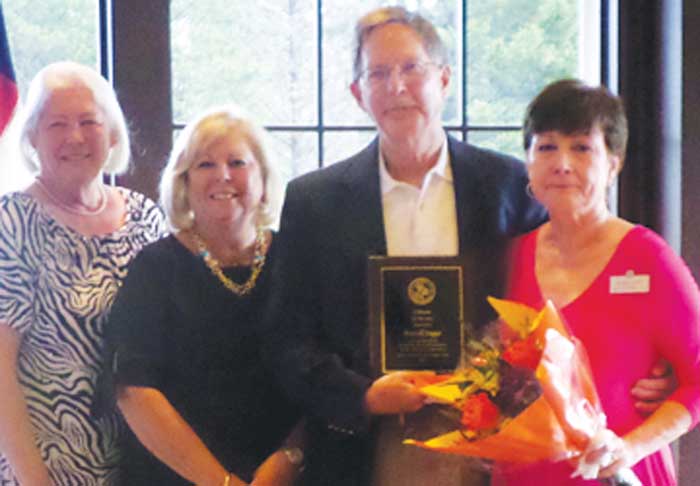 Members of GFWC-NC Mocksville Woman’s Club met on Sept. 13 at Bermuda Run Country Club as the 2016-17 program got under way with a strong focus on fundraising and community service.

Making efforts as a group in arts, conservation, education, home life, international outreach and public issues, the woman’s club continues to be an organization focused on service to the community, but fun and fellowship among club members is also a key component to their contributions and success as a group.

Over the summer, members of the club displayed support to the community through donation of the flagpoles and an American flag for the new Davie High School.

Past President Jean Saunders (2024-2016) envisioned a gift of longstanding value. Each day the students arrive at their new school, they will see an unwavering flagpole with the flag waving. Many club members attended the ribbon cutting ceremony and a dedication of poles and flags, previously flown over the state capitol, were dedicated by Rep. Julia Howard in August as part of an open house celebration at the new school.

In addition, the president’s project for 2016-2018 was completed and donation made to help fund the building campaign of Dragonfly House, an agency that provides support to abused children.  Brandi Reagan, executive director, was presented with a check for $5,000.

“Last year, in Davie and Davidson counties, 469 validated cases of child abuse were reported and addressed,” said Reagan. The Dragonfly House became fully accredited in 2013. With a gift of land, the agency broke ground for a new facility that can house abused children and meet their emotional, physical and mental needs.

September’s meeting was called to order, and prospective new members and guests were introduced. Women in Davie County interested in getting involved in their community through personal commitment, contributions, and service can attend a meeting as a member’s guest to learn about the wide range of service projects in which the club is involved.

The Mocksville Woman’s Club Citizen of the Year award was presented to Davie County resident, Russell Suggs, who was recognized for his support to community service work.

“Russell is an inspiration to all through his dedication to serving others,” said Christy Schafer. Russell is married to club member and public issues community service program co-chair, Sidniee Suggs. The Citizen of the Year award is presented to a non-club member who has demonstrated exemplary service to the Mocksville Woman’s Club and the community.

Reports of community service projects by respective chairs followed with public issues being the focus of the morning program, and co-chairs, Gail Kelly and Sidney Suggs welcomed speaker, John Eller, Davie County manager, who gave an update and presentation on the current status of numerous county projects with an overview of future strategic planning.