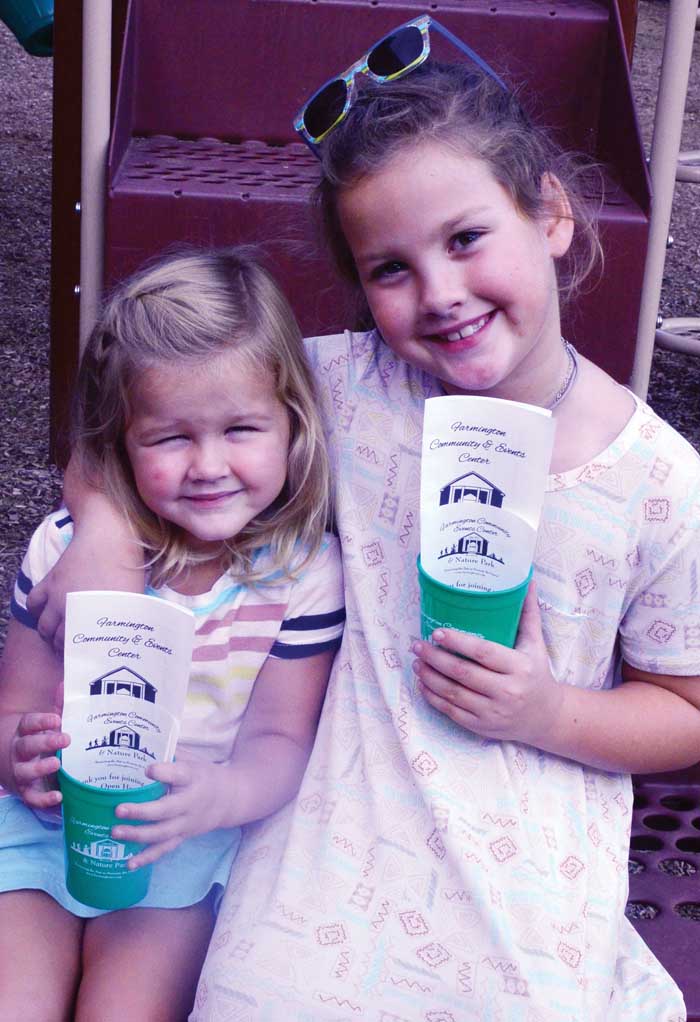 Olivia and Isabel Welborn show off their goodies from the Farmington Community & Events Center open house. - Photo by Robin Snow

FARMINGTON – Marty Carter remembers well that day in 1970 when all of the students at Farmington School were huddled into the auditorium.

From there, they could watch on television the launch of Apollo 13.

That was one of a multitude of memories shared Friday as the Farmington Community & Events Center held a “big reveal” for the renovated school on Farmington Road.

John Caudle probably had as many memories as anyone there, as he has lived  across from the school for most of his life.

He told the story of Vada Johnson Nicholson and Queen Bess Kennan, friends until the issue of politics came up. One was a staunch Republican, the other a Democrat. They would really go at it, but always ended up as friends.

“Vada, she taught everybody who lived in Farmington for 50 years,” Caudle said.

The entrance to the new events center starts with a founder’s room (of which Caudle is one), and is flanked by the ladies’ parlor, which includes information on the two women.

Many artifacts are on display in the founder’s room, including old school desks, and photos framed in windows taken from the original auditorium.

“We’ve been working on this for a long time,” Caudle said. “We’re hoping to have some events in here as well as on the property. We hope to get more young people involved.”

Board President Allyson Sawtelle called the renovation an “amazing transformation.” “This has been a labor of love for 10 months. We are so appreciative of the community for embracing this.”

Melanie Cook, executive director, said that when she learned that former state senator Andrew Brock had obtained a $100,000 state grant for the project, she couldn’t stop imagining what could be done. “I walked through these old buildings, seeing what they used to be, and what they could be.”

Brock also spoke, learning that the room behind the main stage had been named the “Brock Room” in honor of him and in memory of his grandfather, B.C. Brock.

Brock’s parents met at Farmington School. “This place is special to me,” he said. “This has always been the center of the community. This will continue to be used for 50 to 100 years.”

“Ya’ll have outdone yourselves,” said Carolyn McManamy, president of the Davie Chamber of Commerce, just prior to a ribbon cutting. “The transformation is phenominal. It’s a great re-purposing and great for our history.”

The property also includes a 65-acre nature park, with trails and plans to add more amenities in the future.