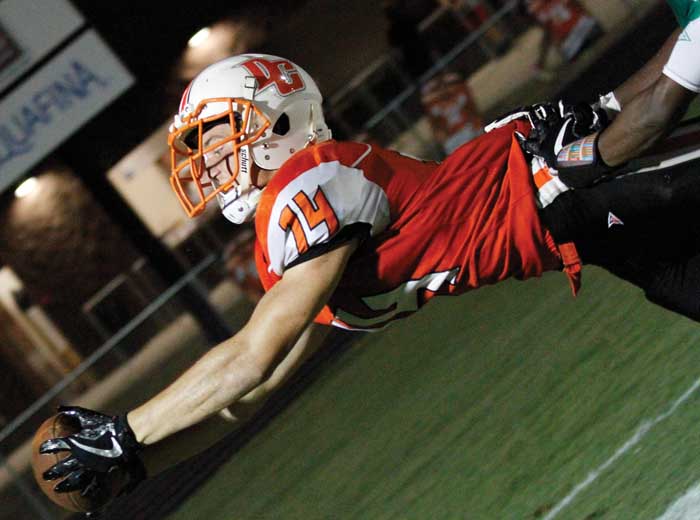 Cooper Wall’s return had the makings for something special Friday night at War Eagle Stadium. After missing the first five games while recovering from a basketball ACL injury, Davie’s senior receiver went to the house on his first touch.

Visiting A.L. Brown, however, ultimately reduced Wall’s grand entrance to a footnote, forcing seven turnovers and scoring 23 unanswered points on the way to a 30-17 win.

The Wonders (5-1) ran their winning streak to four as they gained a measure of revenge for a 4A playoff loss at Davie last November. Davie (3-3) saw its three-game winning streak curbed in its final nonconference game.

“If you get (seven) turnovers and you don’t win the ballgame then something’s wrong,” Brown coach Mike Newsome told the Winston-Salem Journal. “I knew it was going to be close regardless. Two good teams. Our kids were really looking forward to this one.”

On the game’s second play from scrimmage, Wall ran a go route. There was miscommunication on Brown’s side as two Wonders followed receiver Jack Reynolds to the right flat. Quarterback Josh Hall stepped up in the pocket and slung it deep. Wall caught it at the Davie 43. At the Brown 47, Wall discarded a 155-pound defensive back with a ridiculous stiff arm. Wall’s cousin, receiver Mason Wilson, provided a big block at the Brown 30. Wall dove on the left pylon to complete a breathtaking 79-yard touchdown. Thirty-two seconds in, it was 7-0.

“I knew I was wide open,” Wall said. “I thought I’d catch it and maybe be a step slow and get tackled. But I saw an opening and I was pumped up.”

“We’ve been missing 81,” Davie coach Tim Devericks said. “That brought some juice to the guys on the sideline because they’ve been waiting for that moment.”

The buzz coming in was about Brown’s ground-and-pound game – it was averaging 304 rushing yards per contest – but Davie’s front seven completely stymied Brown’s ball carriers all night. The Wonders had minus-8 yards on 28 rushing attempts.

Hunter Meacham and Cody Hendrix tackled runner Nick Lyerly for a 6-yard loss on Brown’s first play. But Davie’s spectacular run defense mattered not one bit. Brown quarterback Jordan Medley played superbly while overcoming two interceptions, completing 22 of 35 passes for 319 yards and three TDs. His first completion was the answer to Wall’s TD, a 67-yard hookup with Justin Rodgers to the Davie 19. Hendrix stripped Lyerly, but Brown recovered the fumble at the 22. Two plays later, Medley found Keon McGee for 20 yards, tying the game at 7.

“I think they were expecting what we were able to do against their run, and that’s why they tried to air it out a lot,” Devericks said.

Davie threatened to retake the lead on its second series. One play after Peyton Hampton ran up the middle for 13 yards, he bowled over defenders and carried the pile an extra 8 yards for a 15-yard gain to the Brown 12. But on the next play, Hall tried to hit Wall on a slant and Equaris Baldwin intercepted at the Brown 1. It was the first of three picks for Baldwin and the first of six thrown by Hall.

“From watching film, I really thought their secondary improved a lot over the offseason,” Devericks said.

Brown kept the ball for nine plays but wound up punting. On third-and-7 from the Davie 36, outside linebacker Kinston Whitener held up Medley for 3.5 seconds. Linebacker Matthew King finished him off for a 12-yard sack.

On a third-and-1 play on Brown’s next possession, Lyerly tried a jet sweep. Hendrix, who was all over the place and once again reminded us of just how good the senior linebacker is, corralled  him 5 yards back.

Hall completed a 24-yard fade to Wall and Josh Robinson got to the edge for 12 yards to the Brown 20. The next play, though, triggered Davie’s downward spiral. Hall’s TD pass to Evan Little was erased by a lineman-downfield penalty and the next play resulted in Baldwin’s second pick.

Davie safety Broc Barnette went high for a tremendous interception at the Brown 42 on the very next play, but then came the third pick in a span of four plays. Hall went deep to Wilson. Brown’s Jnaz Jordan batted the ball up in the air and teammate Omari White dove to catch the tip in the end zone.

After King sacked Medley, Jalen Nixon caught a shovel pass and was met by Hendrix first and then Anthony Olmedo. The result was a 10-yard loss to the Brown 1.

The momentum was back on Davie’s side. On third-and-23, Wall used a bubble screen to pick up 23 yards to the Brown 15. Skyler Schoppe followed with his longest field goal of the season, 33 yards, to give Davie a 10-7 lead with 3:13 left in the half. The junior is 4 for 4 on the year.

Less than two minutes later, a low snap to punter Barnette helped flip the game. Barnette had to go to a knee to get the ball, and he was immediately whistled down at the Davie 17. Brown took advantage of the short field and seized a 14-10 halftime lead.

“We’ve got to scratch and claw and find a way when the ball doesn’t bounce our way,” Devericks said.

The defense gave Davie a lift early in the second half. Safety Mitchell Ijames knocked a long pass away and Wilson caught the deflection for his third pick of the year, one behind leader Barnette.

Ijames had a near-pick, but Nixon wrestled the ball away for a 30-yard gain to the Davie 5. The defense made a stand. King and Jalen Redmond stopped Jalen Neal for no gain on first down. C. Hendrix and cousin Samuel Hendrix stopped Neal for no gain on second down. On third down, Wilson tipped a pass in the end zone and Barnette knocked it out of the receiver’s hands. Brown settled for a 22-yard field goal and 17-10 lead.

But from the six-minute mark of the third until the end, there wasn’t much for home fans to cheer about. Jaran Young intercepted a fade to Wall at the Davie 42, and Brown scored in four plays. Three minutes later, Medley and Antonio Knight connected for a 30-yard TD that pushed the margin to 30-10.

“We had some momentum early,” Devericks said. “They were able to make some adjustments and go some zero man and not give our quarterback a lot of time. And it forced us into a lot of quick throws.”

“We put it on (Medley’s) shoulders and he did it,” Newsome said. “I couldn’t be more proud of a guy.”

“Coach told me during the week that in order to win the game we were going to have to throw the ball,” Medley told the Journal. “We opened up the passing game and my receivers came through for me.”

When the margin was 20, Whitener blocked a punt at the Brown 19. Wilson followed with a flashy 18-yard TD catch. He laid out and managed to get a foot down inbounds on a fourth-and-9 play. That trimmed Brown’s lead to 30-17 with 4:52 to go.

“It was a matter of inches to get his feet in,” Devericks said. “It was a tremendous effort.”

• Davie’s 7-3 loss in the turnover battle was out of character. It had dominated that category all year, entering with four giveaways and 14 takeaways through five games.

• Hall had a weird stat line (16 of 39 for 271 yards). He threw two TDs – a late flag wiped out another on the pass to Little – and his passing yards tied for 18th most in the single-game record book. But then there were the INTs, although two came in the last four minutes when the game was basically over. “It’s just one game,” Devericks said. “Josh is a student of the game and he’ll study it. I might have tried to force it to some people just due to the circumstances.”

• After a four-catch, 132-yard first half, Wall finished with five for 140. His 79-yarder was the longest catch in three years (Ben Ellis caught an 84-yarder from Parker Correll in 2014). Davie’s career receptions leader recorded his ninth 100-yard receiving game, two from the record. He surged to second in career receiving yards with 2,530. Joe Watson had 2,608 from 2008-10. Ellis, who had 2,522 from 2013-15, is now third. It was a long and grueling road to nurse the knee back to health. “Yeah, it was a tough eight months,” said Wall, who rehabbed 2-3 times a week. “It took all eight months to get my strength and confidence back to where it needs to be. And now I’m feeling great.”

• The War Eagles have a bye this week, giving them two weeks to prepare for the Central Piedmont Conference opener against Reynolds. When they host the Demons Oct. 6, the final piece of the offensive puzzle – offensive lineman Zach Clubb – could be in uniform for the first time since Sept. 16, 2016. The senior has battled knee injuries since his sophomore year. “We think Clubb could rebound in a week or two,” Devericks said.

• You had to feel bad for Davie’s front seven, which more than held up its end against Brown. Sixteen plays for Brown went for zero or negative yards.