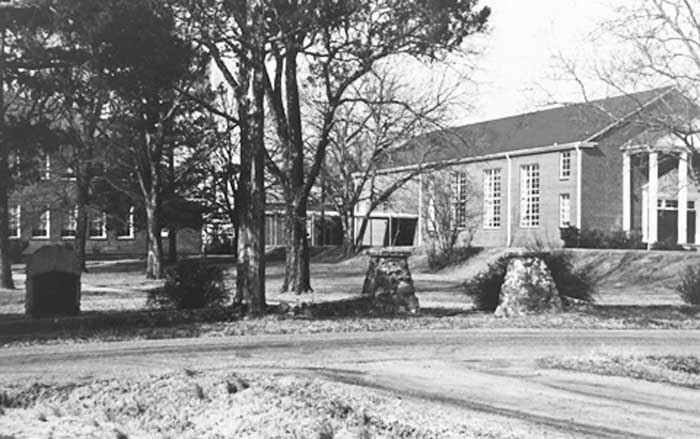 In 1950, Farmington School was finally completed.  The auditorium, cafeteria, and home economics laboratory were the finishing touches for the school that had become a landmark in the Farmington landscape.

As changes always come, in 1954, the discussion regarding consolidation resurfaced. Two hundred residents, representing all of Davie County, voted to consolidate the four existing high schools into one central high school.  Mocksville, Cooleemee, Shady Grove and Farmington all combined in the new high school building that had been built on a 30-acre site on US 601, just south of Mocksville. Not all of the students were happy about the transition and a few seniors of the Class of 1956 quit school, rather than graduate from Davie High School.

For most though, the merging of all four high schools into one would be a tradition that would continue for the next 63 years, as the new Davie High School moved down the road from the old Farmington School to 180 War Eagle Drive.

As Farmington School opened in the Fall of 1956, it opened as an elementary school.  It would remain that way until 1969-70, when Pinebrook Elementary opened. During the years that Farmington was an elementary grades school, the old home economics laboratory became the first grade classroom.

As students and faculty left the Farmington School site, the condition of the already deteriorating buildings worsened. A group of Farmington Community members decided that it was time the community do something to save the old school. Graham Madison was the chair of the Davie County School Board and had been a former principal at Farmington. The community members went to Mr. Madison to ask for the property to be conveyed back to the community.

Mr. Madison agreed and the buildings and 7.04 acres were conveyed to the Farmington Community Association. Inc. Those first community members were John Caudle, Joe Harpe, Betty West, Joseph Smith, and Reaves Gardner. They made up the first board of directors for the newly formed association.

The former gym building became the home for the Head Start preschool program.  Many adults remember being a part of that early 70s preschool program in Farmington.  That building was eventually torn down, as it was declared unsafe.  The land where children ran and played and where home basketball games were played, is now the Community Walking Trail. Ninety-eight years later, visitors can still walk laps on the same ground that the original gymnasium sat on.

Over the years, the community center transitioned to meet the needs of an ever-changing community.  At one point, the former school auditorium became a gymnasium, and served the community, in that capacity for many years. The former school cafeteria became the banquet hall and the interior remodeled thanks to the generosity of volunteers in our thriving bluegrass community.

The former home economics laboratory was cleaned out, thanks to members of the Davie County Coon Hunters Club, and is now a functional meeting room.

In 2016, then Sen. Andrew Brock made a phone call to Melanie Cook, executive director.  Some state funds were available for community refurbishment projects and Farmington Community Association was the recipient of one of those grants.  In the Fall of 2016, the association received $100,000 to refurbish the old schoolhouse.

The first goal was to do things that would make Farmington Community Events Center more energy efficient. New LED lighting throughout each of the three main buildings replaced antiquated lighting, creating a better lighting environment as well as a more long-range economic solution.

The next step was to install new windows and doors in the former school auditorium. Much care was taken to update the building, while keeping the architectural style of 1950. The new windows reflect that style as the new windows replicate the old paned-window style.

Once the major energy-saving features were installed, the beautification projects began. The former auditorium received a facelift as the transition was made from the space being used as a gymnasium to it becoming an events center.  The meeting room and banquet hall also received a facelift.

All of these much-needed updates have been leading up to an open house, ribbon cutting and big reveal of the newly-refurbished spaces at the old school-house on Friday, Sept. 22 from 4-7 p.m.  We invite you to come out to view historical displays tracing the progression of education in Farmington and walk the old sidewalk from the stone pillar fronting Farmington Road to the end of the sidewalk, where the old school-house sat.  We will have guided tours of the facilities, hors d’oeuvres, music, and door prizes.

Farmington Community Association serves as the guardians of the historical properties and we invite you to come back to school on Sept. 22.

Much of the information in this article is from the work of Polly A. Lomax, “A Brief History of Farmington Schools” and information gleaned from the Davie County Public Library History Room and

Digital Davie, a service of the library.