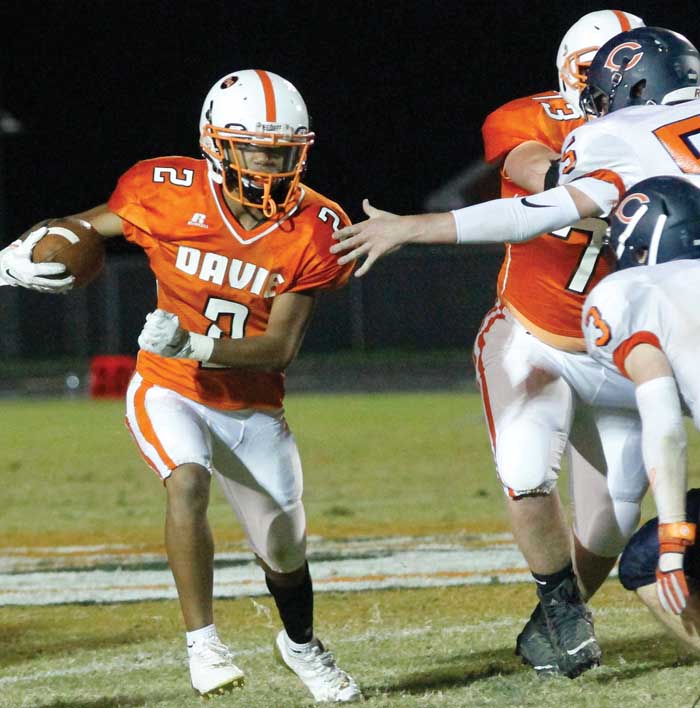 A War Eagle runner looks for an opening.

Davie’s JV football team could not have gotten off to a worse start.

Visiting Carson ran a sweep left on the game’s second play from scrimmage, and the result was a 75-yard touchdown. Davie fumbled the ensuing kickoff. On first down, Carson ran a sweep right, and the back got loose for a 42-yard TD. Less than two minutes into the game, it was 14-0.

Carson’s triple option was going to riddle Davie all night and the Cougars were going to score 40 – or more – on Davie’s home field. At least that’s what it looked like in the early going.

But the War Eagles had other ideas. Darned if they didn’t score 26 of the next 32 points to win 26-20 in a never-dull nonconference game on Sept. 14. Davie (2-2) has one more nonconference game before Central Piedmont Conference play begins.

“The No. 1 thing is we got our heads right,” coach Blaine Nicholson said. “About four of our guys went brain dead (on Carson’s first two possessions). Everybody on defense was frustrated.”

Veteran defensive coordinator Dave Hunt was smart enough to think of something.

“Coach Hunt adjusted his calls,” Nicholson said. “We started bringing more heat with our outside linebackers and playing more man to counter the sweep. So coach Hunt did a good job of adjusting.”

On an option play, Carson fumbled and Arey recovered at the Carson 39. After Deters’ 20-yard reception, Joe Johnson ran up the middle, bowling a defender at the 4 and scoring to close the deficit to 14-12 with 1:25 left in the first quarter.

Carson went three-and-out. On first down, Hampton and Ben Crenshaw hooked up for a 53-yard TD. Jonas Frank’s kick was good for a 19-14 Davie lead.

“Their safeties were cheating up and Ben burned them over the top,” Nicholson said. “They didn’t have a chance.”

But in the second half, Davie’s defense shut off the triple-option spigot for the most part and the offense put together an eight-play, 56-yard drive for the go-ahead score. Johnson reached the end zone from 6 yards out. He deserved the glory, having gained 40 of the 56 yards on five bullish runs. Frank converted the kick to cap the scoring with 5:55 remaining in the third.

Lyons (13 carries for 79 yards) and Johnson (seven carries for 59) both look like true No. 1 running backs. The offensive line – Paul Pollard, Stuie Marshall, Avery Taylor, Ashton Williams and Shane O’Brien were the starters, although all 10 of Jimmie Welch’s guys got action – has something to do with that.

“Our offensive line was opening huge holes,” Nicholson said. “Sometimes Kristian ran 7 or 8 yards without getting touched. When Joe gets a head full of steam, he punishes the second level, which is really fun to see because a lot of times your JV running backs don’t do that.”

The Cougars would not quit, however. They marched from their 16 to Davie’s 15. That’s where the War Eagles dug in their cleats. On first down, Austin Shaver stopped a run for no gain. On a second-down sweep that gained 1 yard, Caleb Steele got the tackle. On third-and-9, Steele sacked the quarterback for a loss of 5. On fourth-and-14, Steele delivered another sack, one for minus-7. The 15-play drive had yielded no points for the visitors.

“You don’t expect that to happen two plays in a row,” Nicholson said. “I asked him how he got to the quarterback twice in a row. He was so excited and said: ‘Coach, I don’t even know.’ On the first sack, he used his speed. On the second sack, he worked a move and set him up from the play before.”

Lyons iced it, sandwiching 10-, 9-, 5- and 6-yard runs around a 14-yard completion from Hampton to Hunter Rose. Ballgame.

“Late in the game, everybody knew the ball was going to him and he was patient enough to see the holes, get what he could get and cover the ball up,” Nicholson said.

The War Eagles passed a major test – 14-point deficits are not easy to overcome – as back-to-back wins gave themselves a foundation to build on following an 0-2 start.

Besides Johnson’s two TDs, Hampton went 8 of 13 for 157 yards and two TDs, without a turnover. And just think, the 6-5 freshman QB is far from a finished product.

“He’s getting comfortable in the offense,” he said. “We were a hair from executing three deep shots. He hit the check down when he was supposed to. He looked the safety off. Those are big things.”

“Kentrell beats a lot of offensive linemen with quickness,” he said. “He’s a good run defender. He pursues the ball very well.

“Austin had his best game by far. He was nicked up in earlier games. He was a captain for this game and he took that serious. He loves Davie County football. It really matters a lot to him.

“Cuthrell and Recktenwald may have led us in tackles. It took them a while to get going, but they had good games.

“Hill has had a great game every game. He’s by far our most consistent. He’s going to have a huge role on varsity next year.”

Notes: Davie has back-to-back wins for the first time since 2015. … Deters posted team highs in catches (four) and receiving yards (62). … A solid win was tempered in the final seconds by a season-ending injury to Pollard. “I hate that for him because he had worked real hard,” Nicholson said. “He was giving it his all while he was with us, and we wish him the best. We really want to have him back (next year), that’s for sure.”