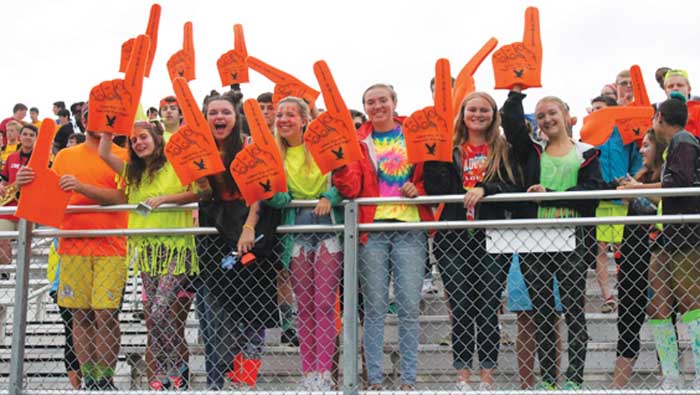 The Davie Crazies have fun with the United Way of Davie foam fingers at Thursday night's game.

In spite of the weather and a game night switch to Thursday, the War Eagles and United Way made it happen at the game against Mooresville and the kickoff of the 2017 Annual United Way Campaign.

The weather cooperated for the halftime show when Dr. Darrin Hartness and Jeff Wallace, along with  Marcia Perrell, the 2017 United Way Campaign chair and Josh Hanes, United Way’s board president took to the field to announce the Davie County School System’s 2017 campaign goal of $35,000.

Last year the school system raised almost $32,000.Stay tuned for the results of the campaign which will be announced at a home game in October.

“We have so many to thank for making our campaign kickoff at the new War Eagles Stadium a success,” said Melinda Beauchamp, United Way CEO. “Mike Absher, Andrew Jimeson, Jeff Wallace, and Bob Donley really bring all the details of such an event together and we are so grateful for their support.”

Another important factor in the success of the kickoff is an incredible group of United Way concessions stand volunteers led by Neal Smith, a long-time United Way supporter and leadership volunteer, she said.

“We had an incredible group of dedicated volunteers who still came out, even with the schedule change, and worked hard to promote United Way while serving the folks who attended the game,” Smith said. “Thank you all so much.”

“Now is the time to show your support for United Way of Davie County,” Beauchamp said. “If your place of business does not host a United Way employee campaign, ask that your company Join the Fight. Over 35 companies in Davie County do not have employee campaigns. This means many people are not being educated on what our community has to offer nor are they being given the chance to support this valuable organization that fights for the health, education and financial stability of every person in our community.

“If you want to be a part of the organization that looks for the gaps in services, finds new solutions to old problems, mobilizes the best resources to address our community’s most daunting social crises, that understands we are always stronger together, United Way is where you want to invest your charitable dollars.

“We have one life. To live better, we must live united,” Beauchamp said.

Hollingsworth partnership continues to pay off