Thompson wins it all on last lap 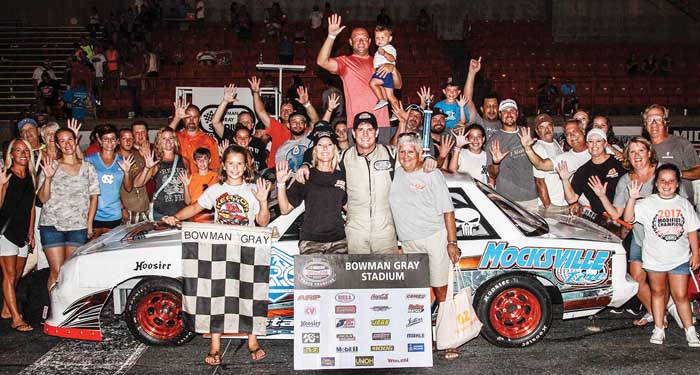 In the dramatic final Stadium Stock race of the season at Bowman Gray Stadium on Aug. 19, Mocksville’s Wesley Thompson turned himself into one of those action movie heroes. You know, he’s completely out of ammunition, but somehow he finds a way to make a weapon out of a bottle and duct tape and then he kicks fanny.

But the 15th lap belongs in a Hollywood script. Thompson held on for the win. Meanwhile, a horror show played out for Hunt, who was swallowed up in a wreck and tumbled to 20th place. As a result, Thompson’s ho-hum fifth win of the season became an epic win. Not only did he win the race, he broke a tie with Hunt, who also had four wins. Not only did Thompson claim the Top Gun award for most wins, he snatched the points championship.

Talk about a trifecta.

“We had a little luck on our side,” said Thompson, who won the points for the first time in 12 years of racing at the famous Winston-Salem track. “If you win a championship over there, you’ve definitely got to have some luck. I don’t care how fast or good or whatever, it still takes a little bit of luck.”

In the second-to-last week, Thompson was two points behind Lexington’s Hunt before he was victimized by lousy luck – a broken rocker arm – and finished last. He fell to third in the standings, 18 points behind Hunt.

In the finale a week later, Hunt started on the outside pole and Thompson third.

“(Hunt) took the lead right off the get-go,” Thompson said. “With about seven or eight laps to go, I got by him for the lead. I think he was pretty content running second because all he had to do was finish in the top five (to win the points). I had to finish five spots in front of him to win. It was pretty much a done deal. I knew the championship was going to be a stretch at that point in time. Then it all fell into place.”

Yep, then came the swing of events that absolutely nobody saw coming.

“On the last lap, I ran up on some lap traffic,” he said. “It was partially an error on my part. I misjudged how slow (the lap car) was going, and I basically punted him out of the way. Then Chase got collected in that mess and it cut his tire. He wound up finishing 20. It all went down on the last lap, but it worked out in our favor for sure.

“(Hunt) handled everything with a lot of class. He’s a good dude. We’ve always run pretty well together. There was a part of me that felt bad for the guy. He led the points pretty much every single week of the season – except for the one that counts. I’m sure he wasn’t real happy about it, but that’s part of it. I didn’t do anything intentionally to him. I was just protecting my lead.”

With a championship to savor at long last, a celebration raged deep into the night. After standing “pretty much in second all year to Chase,” Thompson closed with 766 points. Four of the top six are Davie County drivers, with A.J. Sanders in second at 762, Hunt in third at 708, Chris Allison in fourth at 682 and Grayson Keaton in sixth at 678. (Remarkably, Keaton pulled off sixth as a rising junior in high school.)

If Hunt avoids the mess on lap 15, he wins the Top Gun award and the points. Of course, the unthinkable happened and Thompson won everything. How much is the cash prize?

“I don’t know what the championship pays,” he said. “I know it’s not enough. We won’t get that payout until the banquet. You don’t do it for the money, I know that. But I’m not going to turn it down.”