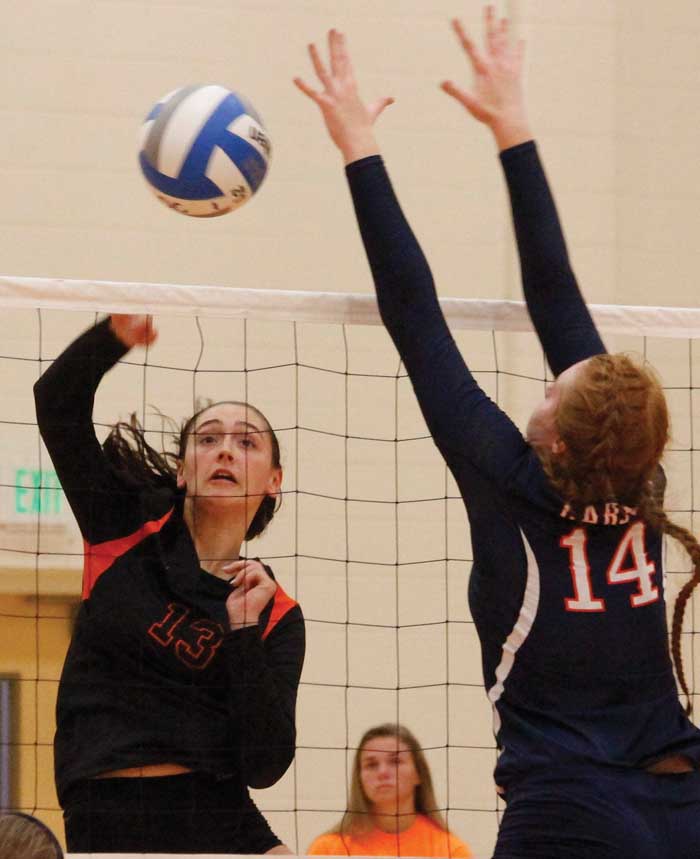 The season-opening match for Davie’s varsity volleyball team – and the first sporting event at the new campus – tasted like a bacon cheeseburger as the War Eagles beat Carson for the first time ever, 3-1, in a tense and draining battle on Aug. 15.

“They are one of the best-coached teams that we play,” coach Amber Brandon said. “We always talk about how great their ball-control is. That’s why we start with them. They are always so strong, so well coached, that it’s a good measuring stick for us. We know right out of the gate where we measure with other teams in our area.”

“As soon as we went into warmups, I knew my kids were ready to play,” Brandon said. “We had three goals. We wanted to win the first point (Cara Terry made a great dig to help Davie score the first point), the first set and the first match (in the new gym). And we did all three.”

To say 6-foot-1 senior Tyra Galloway is going to be a heavy contributor in her return to Davie would be an understatement. She played for Brandon on Davie’s JV as a freshman. She attended North Surry as a sophomore and Mt. Airy as a junior. She transferred back to Davie for her senior year, and she returned ready to dominate. The girl with absolutely ridiculous hops, the girl with the lightning-bolt quality, had two blocks in one sequence. She had stuff blocks. She had at least 15 kills. And she wasn’t 100-percent healthy.

“On the first day of practice Tyra got an injury that caused a scare,” Brandon said. “We have been dealing with that and trying to get her healthy. In the third set, she was hurting and I told her: ‘You’ve got to be a leader. Put this team on your back and get through this game.’ Her play and her attitude totally changed.”

Galloway is a future Division-I player, having verbally committed to Charlotte.

“To see those three (seniors Kim Clemo, Galloway and Kam Parks, who played on a 17-4 JV team in 2014) back together has been a cool thing for me,” Brandon said. “When Tyro came in as a freshman, she didn’t know a lot about volleyball. But she has absorbed everything she gets. She is so mature for her age. When we talk to Tyro, it’s like talking to another adult. She wants to get better. That’s what makes her so special. She’s a great athlete and puts the ball away.”

These War Eagles are going to be fun to watch, partly because of junior libero Morgan Flores, who was named player of the match by Brandon.

“Defensively, she put on the best show I’ve ever seen watching all levels of volleyball,” she said. “People that don’t understand the game might not have seen that, but she picked up a lot of balls that we normally wouldn’t consider her job.”

Setter Lauren Grooms and the versatile Slabach are hot commodities as third-year starters. Both are juniors.

“Carson was (Grooms’) first game as a freshman on varsity,” she said. “She has always been so talented, but she’s always been the young kid trying to be the leader. And that’s not an easy task. Now, to get to see her use her talent and be an upperclassman has been a cool thing to watch the last couple of weeks.”

“With Tyra coming back, Emma got to make a position change, which is something that really helps us,” she said. “She went from a super undersized middle last year to where she can really score this year. Emma is such an athlete. She’s smart. She’s strong. She sees the court well. She’s a good leader. Emma is the dream kid to coach. She works every play, and she’s not scared to call her team out to work hard.”

While two of the main outside hitters are sophomores Kayla Moore and Clark, they’re playing beyond their years.

Davie kept the momentum going in two matches at Starmount on Aug. 19. It blanked North Wilkes and Starmount in three sets, and the 3-0 start is the best in six years. Becky Miller’s 2011 team opened 3-0 before finishing 16-11.