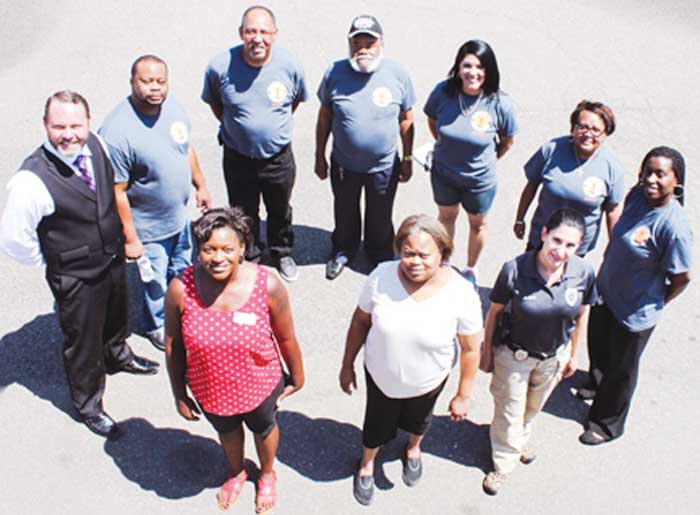 The team from Life Restored Ministry and SAFE are ready to fight the opiod epidemic in Davie County.

Protected from or not exposed to danger or risk and not likely to be harmed or lost describes a local nonprofit’s mission in a nutshell.

The program became a reality in January of 2017 when the team was assembled. The motivation evolved out of the death of a Mocksville resident, Mr. Ross Allen King Jr. Mr. King died on June 4, 2016.

A grand opening at the headquarters at 129 E. Depot St. was held June 3 with local leaders and residents.

“Even a small quaint town such as our Mocksville can be and has been ravished in the shadows by the darkness of substance misuse and the fallout of the effects related to such on our entire community,” said Jason Ijames, executive director for Life Outreach. “The time for action has been upon us and the first action is to spread light and hope upon the issues that afflict our families, friends and neighbors.”

SAFE is a life approach and not focused on just substances. Research based evidence shows that substance use is a symptom of a problems and not the problem itself.

SAFE identifies all afflictions and address them with an action plan supported by the team.

“This well diversified team works in conjunction with a web of resources and outside agencies to offer the best possible avenue for success in any person whom is struggling with any affliction in life,” Ijames said.

The team immediately went to work in the community. The first workshop was held in February. The workshops are held every Tuesday night with food and fellowship beginning at 6:30, the workshop is from 7-8:30. If a holiday falls on a Tuesday you will still find the team at 113 Mill St., Mocksville.

The workshop approach is based on the model that Kessler developed and implemented for addressing not only the afflicted but the affected. He calls his model the GRIP IT model. GRIP IT stands for Get Really Into Prevention In Time.

It is not about solely preventing substance use but preventing people from accepting a lower standard of quality of life, teaching people that they are worthy of living and not just surviving.

Since that first cold night in February, SAFE has been directly involved in assisting more than 60 people with afflictions, primarily being substance use, through its workshops. Sixty of those persons whom received assistance have been tracked and 43 are in active recovery.

“That is 43 people whom are not only getting a second chance at life but are becoming invested in the community and setting examples for others along the way,” Ijames said.

The workshops are supported by the group setting which encourages those afflicted and those affected to be in one place and heal together. That is only part of the use of the GRIP IT model, which also recommends that the afflicted attend one-on-one sessions with Active Recovery Life Coach, Family and Greif Coach, and Support and Mentor Coaches for accountability and guidance. The program requires its participants volunteer a specific number of hours each month.

“This allows us to learn to get out of ourselves and be vested in our community,” Ijames said.

The GRIP IT model was recently awarded a special recognition of honor from the U.S. Congress, presented by Cong.  Ted Budd of Advance on May 22.

The initial commitment for a participant is a minimum of one year, although the program is expected to be a five-year achievement for the individual seeking assistance. There are levels and achievement points set as goals as incentives and points of reflection to gauge progress. The levels are color coordinated to reflect overdose awareness in black and purple.

The first level is black and participants whom participate in the program usually remain at this level for approximately 90 days. Once they have accomplished volunteer time, not had any returns to use and have been in a progressive status in their active recovery the Black Level is completed.

Return to use is monitored by a third-party substance screening company.

At that point, they move on to the Purple Level, where the community begins to see the progress of the individual. They are beginning to be self-sufficient and active in a positive manner in their communities. This level up to year two is complete and requires that once a year the individual teams up with a fellow member of the active recovery community and host and completes a community project.

No one is denied access to services based on race, color, creed, religious views, political views, sexual preference, or financial situation. SAFE offers testing for HCV and HIV at no cost to the individual, as well as access to care. They are a distribution point for the overdose reversal drug Naloxone, known as Nar can, at no charge. One of the main focuses is to have more accurate numbers of the overdoses and fatalities resulting from such in the area. They track those numbers utilizing EMS and local hospital data, but take it a step farther.

Being involved at the street level they are made aware of overdoses that other organizations may not be.

SAFE. has data collected from Jan. 1-July 25 on overdoses for Davie County.

There have been 122 substance use overdoses resulting in seven fatalities. The lower number of fatalities may be able to be credited to the use of Naloxone.

“These numbers are unacceptable for our communities and SAFE has made it a priority to reduce that number to zero fatalities, while working on a reduction in overdoses in general,” Ijames aid.

Every 8 minutes and 26 seconds there is a fatal opioid overdose in this country. More people died at from accidental overdoses last year than during the Vietnam conflict.

“The time is now, the silence must end, and SAFE is striving to not only make it safe in Mocksville but also the entire region.”