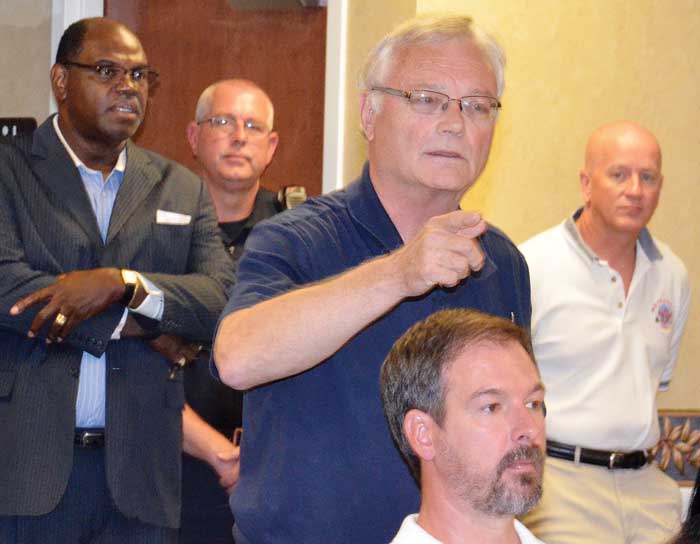 J.P. Green President Ralph Naylor talks about the increased costs to his family's business is the street name is changed.

Mocksville Town Board members heard from residents on both sides of the issue last week before – by lack of a motion – denying a request to rename Depot Street to Martin Luther King Jr. Street.

Board members mostly cited increased costs to businesses as the reason not to make the change, as requested by the Davie NAACP through its president, the Rev. Joe Clark.

Clark said that more than 900 cities in the country have streets named after the Civil Rights icon. “Such a change would be good because it shows citizens want to join with others to honor his legacy of equal rights to all people.”

The pastor at Shiloh Baptist Church, he understands the costs involved to those on the street. Shiloh, where the local chapter was formed in 1953 and still meets, is also on Depot Street.

“Dr. King gave his life in his pursuit of defeating racial injustice without violence … in order to make the world a better place,” Clark said.

Depot Street is the historic home of many African-American owned, and white owned, businesses over the years, said Clyde Scott Sr. “These were vibrant places for folks of Davie County. They all made their mark on Depot Street together.”

Scott said the request isn’t meant to cause hardship, but to honor a street steeped in history. “This is our dream,” he said. “Let’s make it a reality.”

Lynne Hicks has operated her law office on Depot Street for 34 years. It’s named Depot for a reason, she said. Once the hub of town, it was a beehive of activity because of the railroad depot.

“I’m not denying Dr. King was a great man,” she said. “We have no idea how many correspondents we have. We lose business if folks can’t get to us.” She suggested other streets would have less impact than Depot.

Brent Beauchamp of Best Firearms said he has no idea of how many sales he could lose if the street name is changed. He gets orders from all over, not always sure how they found out about the business, just some type of internet search. He would also have to re-submit his federal firearms form, a real hassle, he said.

“The main issue here … it will cause financial burdens on people,” said Peter Parkman, owner of Main Street Canines on nearby North Main Street in downtown.

Gladys Scott said those concerns were taken into consideration by the NAACP, and that all on the street would be affected.

Richard Short, who has his building on East Depot for sale, is not sure how the change would affect the outcome. Depot Street itself is historic, he said.

“We need to understand, this is about all of us,” said Julius Suiter. “Any time we see a name, it’s going to have a bearing on how we view our history.”

J.P. Green President Ralph Naylor said he sees people, not black people or white people. His job is to proect the family’s assets. “It’s going to cost us a lot of money to be able to make this change,” he said.

While Dr. King championed equality, it is not equal to make businesses on Depot Street suffer when others don’t face the same burden. If the town were to accordingly reduce taxes for those businesses? “That would make it equal,” Naylor said.

Board member Lash Sanford said the issue put the board in a dilemma. He made a motion to approve the change. It did not receive a second.

While he doesn’t want to hurt anyone or any business, Sanford said he thinks the board’s duty is to speak for those who feel like they don’t have any power.

He then made a motion for the mayor to establish a committee to study the issue, to see if a compromise could be reached. There was some back and forth on that proposal before board members unanimously approved it.

Board member Amy Vaughan-Jones said she had mostly heard from business owners who oppose the idea.