Couple getting back to normal after wreck 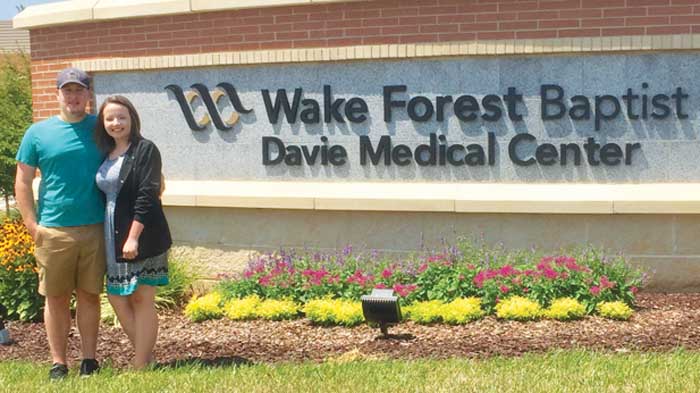 Daniel Moxley and Sadee Doub are thankful for the care she received at Wake Forest Baptist Health.

Around 10 a.m. on a beautiful April weekend in 2016, Sadee Doub, a certified nurse assistant (CNA) at Wake Forest Baptist Health – Davie Medical Center, got into her Honda Civic.

She had just returned from a vacation in the mountains in Ashe County, had gone fishing with her dad the day before, and was setting out for an excursion to the Salisbury flea market with her boyfriend of six years, Daniel Ray Moxley.

Thirty minutes later, she was in a Wake Forest Baptist helicopter airlift as a trauma victim with multiple broken bones and lacerations. Her life, her plans and the lives of an entire family had changed forever.

As Sadee had come around a curve of the two-lane road, the driver of an oncoming vehicle crossed into her lane and crashed head-on at an estimated 85-100 mph. Sadee’s car looked like a bomb had exploded in it. The other driver was dead.

“I didn’t remember anything except the word Dustin, and that turned out to be the name of the first responder who was holding my head in case of a broken neck,” said Sadee.

The beautiful 24-year-old with perfect skin and a stylish haircut talks haltingly about the facts of the event, her many injuries, and the long and painful road toward recovery.

There were more than 24 hours of combined surgeries, almost a month living in someone else’s home and needing assistance with wound care and basic functions, followed by more than a year of hard physical therapy. The litany of her injuries includes fractures of both femurs, fractured tibia and fibula on both sides, fractures of both ankles, burns, crushed pelvis, broken sternum, broken tailbone, six broken ribs, broken thumb, collapsed lung, lacerated liver and lacerated spleen.

Sadee, short for Mercedez, acknowledged months of physical pain, depression and near-despair. She had low moments when the pain was so strong, she wished the crash had taken her life. But she says that it was the constant support from Daniel that made her stronger than the pain.

It was obvious in Daniel’s quiet but commanding demeanor that the young sheriff’s deputy, wearing a “Blue Lives Matter” bracelet, is devoted to Sadee and is her steadfast partner through the hurt and tedium of ongoing treatments.

“Daniel has been my anchor from the first terrible hour, when he waved off help for himself so I could be cared for as fast as possible,” she said. They were in adjacent bays in the ER. Daniel could hear her screams as medical staff tended to his broken sternum.

Sadee’s enormous brown eyes shine as if full of gratitude for the man beside her and for so many selfless gifts from others. “My dad and stepmom took me into their home and built a wheelchair ramp, and provided round-the-clock nursing care.

“Once I was able to go back home, my 13-year-old brother, Ethan, spent his whole summer caring for me when Daniel went back to work,” she said. “I’ll never be able to thank him enough.

“And my co-workers, even the top leaders—the chief of nursing, the president—they all came often to visit and brought me things to help me get through it,” she said. She teared up as she remembers Susan Bachmeier, chief nursing officer, telling her: “Don’t worry about your job. When you are ready, you come back.”

Sadee’s extended family at Davie Medical Center have been key to her healing. “They are all like part of my family,” she said. “My current manager, Sandy MacDonald, nurse manager, has taken me under her wing and has done everything she could to make sure I’m accommodated in every way needed.”

There was an outpouring of help through a GoFundMe campaign by friends to help with medical expenses. Miller’s Restaurant kept a little money bucket for her cause by their cash register.

“And I can’t say enough about Dr. Eben Carroll,” Sadee said. “He’ll never know how important he is to both of us.” Carroll, an orthopaedic surgeon at Wake Forest Baptist, handled her case from the morning after the crash, when she was on the operating room schedule to have her right leg amputated. She lost part of her femur and some cartilage, but Carroll and his team saved her leg.

Sadee said the pain and depression were difficult, but not being able to be in her own home was deeply troubling. It was Memorial Day of 2016 when she was finally able to move back into her small home and to the comfort of Daisy, her chihuahua, and Rose, her cat.

A particularly bright moment was when Daniel’s parents took her to buy some flowers – hanging baskets – so she could enjoy something growing and colorful. She noted the irony that they were impatiens, since perseverance was one of her key struggles.

Another “family member” helped with Sadee’s healing. “Mama Cat and Daddy Cat lived outside, and she had babies. I loved watching the kittens, and the orange one – Clover Dale – has helped save me. He would sit with me all the time like he understood.

“That cat – and those flowers and Daniel and God – were everything to me.”

Sadee withstood months of difficult physical therapy made bearable because she was working with therapists she knew from Davie Medical Center. Then December came, and she was able to go in a wheelchair to her family’s annual Christmas in Myrtle Beach.

In February, Carroll cleared her to go back to work. She called Bachmeier, her boss, on the way home from her appointment and said, “I just got cleared to come back, and I’d like to come back tomorrow.”

She was and is thrilled to be back at work: “I’m with the joint unit but still work with some of the same people from my old unit. They’re made up of people from Mocksville and Winston-Salem, and we’re all making so many new friends.”

Getting back to work was a milestone for Sadee in having some comforting routines restored.

Her right leg is still weak and painful from deep cuts to the muscle tissue, and she walks with difficulty, but some activities are back to near-normal, and better than normal.

She and Daniel used to go camping all the time, and just this month went on a camping trip near Lake Lure. Daniel suggested they go canoeing, and while they were out on the lake, she saw to her surprise lots of people coming down the hill to the shore: her dad and her stepmom, her sisters, and Daniel’s parents.

Daniel then got down on one knee – in the canoe in the middle of Bald Mountain Lake – and asked Sadee to marry him.

Sadee, glad to finally tell a detail that brings her to happy tears, said the main reason she agreed to talk about the tragedy and its aftermath was to inspire someone who is struggling. “I can say that you have days when you don’t want to fight any more, but you can still get through it.”

The life-changing continues, after all the hard work, in a positive direction.

“Now we’re planning a wedding and looking for a house,” says Sadee.