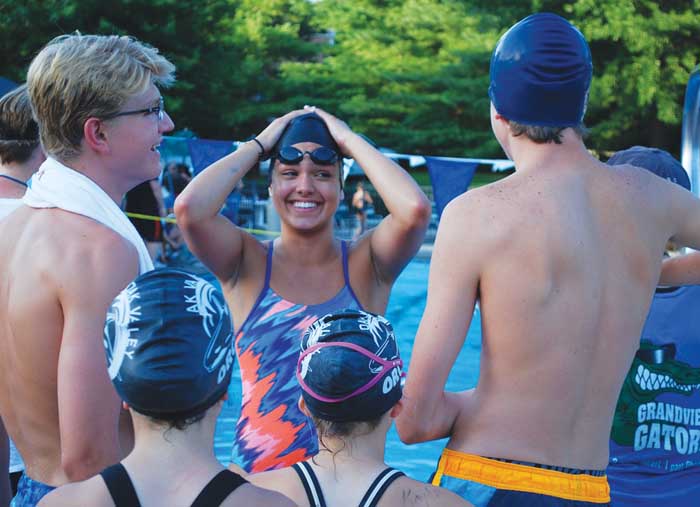 On Tuesday, July 18, the Oak Valley Orcas Swim Club from Advance  competed in the championships swim meet of the Greater Forsyth Swim League (GFSL) at the Greensboro Aquatic Center (part of the Greensboro Coliseum Complex).

The top 16 relay teams and the top 16 individuals in each event scored points for their teams.

The 5-10 year-olds swam on Tuesday morning.  Points-earning places for the Orcas in those divisions are as follows:

The 11-18 year-olds swam on Tuesday afternoon.  Points-earning places for the Orcas in those divisions are as follows:

• 15-18 girls: The 200 medley relay and 200 freestyle relay of Maria Stillson, Elizabeth Dorsett, Victoria Sinopoli, and Umberger placed third and ninth, respectively; M. Stillson finished second in 50 freestyle, first in 50 backstroke (for the fourth year in a row), and fourth in 100 freestyle; and Sinopoli placed first in 50 butterfly, sixth in 100 IM, and ninth in 50 breaststroke.

The Orcas had finished their regular season dual meet schedule the week before championships. They ended the season with a dual meet record of 4-1 with wins over Brookwood, Bermuda Run, Old Town Club, and Grandview. The team had 114 swimmers on the roster, representing 74 families.

The Orcas were coached this year by Jacob Sink and Maria Stillson. They were aided by assistant coaches Ethan Chase and Victoria Sinopoli, and 6&under coach Jeni Richardson.