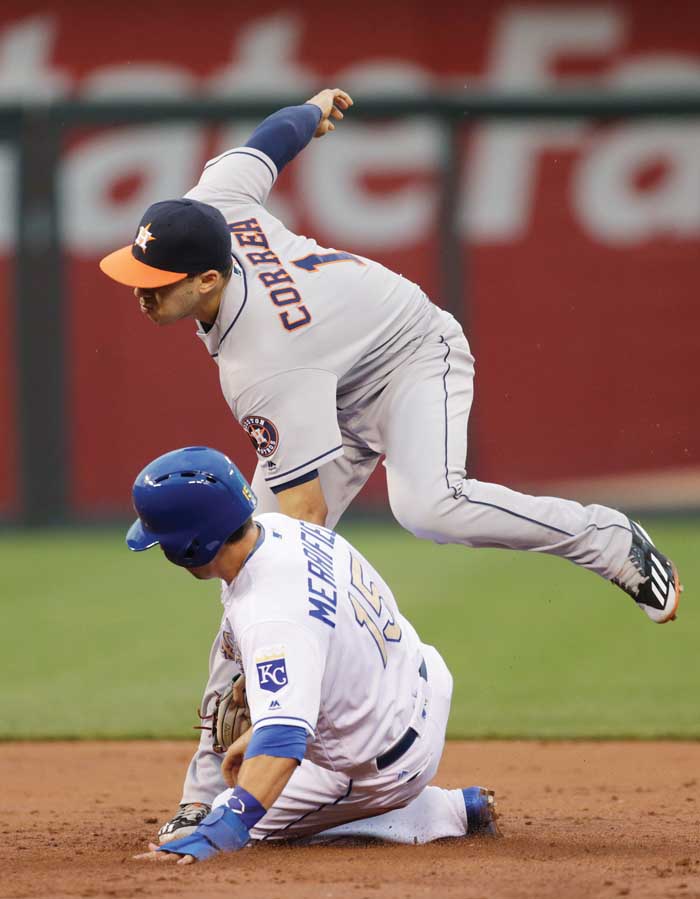 Whit Merrifield of Advance had some really, really good moments in the first half of the season for the Kansas City Royals.

He became the everyday leadoff man while making 68 starts. He’s third on the team with a .281 average. He has seven home runs, 33 RBIs, 32 runs, 16 doubles and four triples. He has 14 stolen bases in 15 tries. While playing mostly second base and some outfield, he has 158 assists against five errors.

Jackie Bradley Jr. of the Boston Red Sox and Merrifield were South Carolina teammates in 2009-10. In 2010 they combined for 26 homers and 102 RBIs to lead the Gamecocks to the College World Series Championship.

“His ability to adapt to any given situation was great because he could be whatever you needed him to be,” Bradley told The Star. “He was a leadoff hitter, he could bat second, he could hit for power if he wanted to. He could drive in runs and he could steal you bases. He was always a guy who could do it all. He’s very athletic and he’s very talented, but he’s also very smart and knows the game extremely well. I expect him to continuously succeed. That’s what he’s done his whole life and I don’t see anything deviating from that.”

Merrifield was the hero when Kansas City beat Boston 4-2 on June 19 at KC’s Kauffman Stadium.

The score was 2-2 in the bottom of the eighth. With a runner at third, Merrifield fouled off five pitches before hitting a chopper between third and short, resulting in the go-ahead run.

“Anytime I have a runner on third with less than two outs, I’m trying to drive the ball to center,” Merrifield told reporters. “(Boston reliever Blaine Boyer) really made a good pitch, but I happened to find a hole.”

Merrifield came around for an insurance run as the Royals won for the seventh time in nine games.

The Royals stunned Toronto 5-4 on June 23 with an improbable ninth-inning rally. Merrifield was front and center as KC won for the 10th time in 12 games.

They trailed 4-1 going into the bottom of the ninth at sold-out Kauffman Stadium. Their chances looked bleak; they were 1-335 since 2010 when trailing by three or more in the ninth inning or later.

“I counted out in my head that if it worked out, I was going to get to hit,” Merrifield told The Star. “I had a chance and took advantage of it.”

With the score 4-3, Blue Jays manager John Gibbons summoned Jason Grilli to face Merrifield. You can probably guess what happened next. Merrifield slammed a two-run, walk-off double to the wall in left to give KC the win. Whew.

He said he believed it was his first walk-off hit since 2010 when his single gave South Carolina the College World Series title over UCLA.

When Merrifield’s hit beat UCLA, a Bruin grabbed the ball and refused to hand it over to the Gamecocks. But Merrifield got a keepsake against the Blue Jays. A Royals employee ran to the backstop and grabbed the souvenir. It was authenticated and handed to Merrifield.

Every now and then, Merrifield will hack at the first pitch in the first inning to keep opposing pitchers on their toes.

“That way pitchers don’t just groove one every time and you’re sitting 0-1 every at-bat,” he said. “It’s important as the leadoff guy to get on the first pitch every once in a while.”

When Merrifield stepped in against Seattle’s Felix Hernandez in the top of the first on the Fourth of July, he decided to attack the first pitch. The result was a home run to left-center. It was an 89 mph offering in the middle of the plate.

KC went on to win 7-3. It was its fifth win in six games. Merrifield set the tone against one of the game’s top pitchers in recent years. Later in the game, Hernandez became the 50th pitcher in Major League history to reach 2,300 strikeouts.

The 10-20 start feels like a long time ago for the resilient Royals, who have gone 34-23 since the horrid start for a 44-43 record at the All-Star break. They’re very much in the mix in the American League Central, third place and three games back. They’re 1.5 games out in the wild-card race.

Flags of Davie are flying on North Main