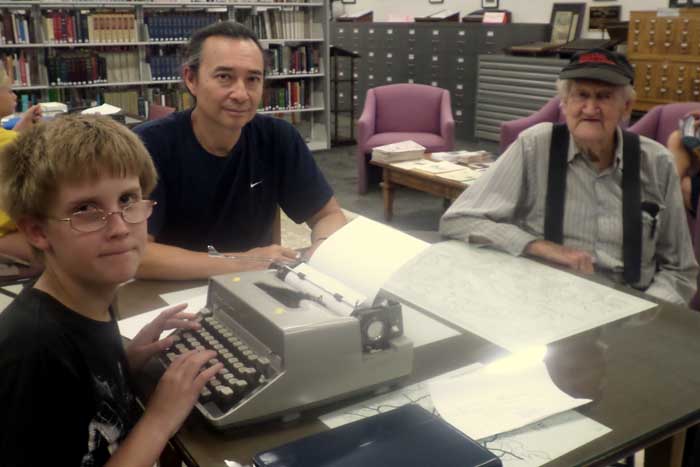 Kyle McLaughlin participates in the Type-In under the watchful eyes of his father, Jack McLaughlin and grandfather, Gene McLaughlin.

Typewriter enthusiasts gathered at the Davie County Public Library as public interest in the vintage machines continues to grow.

Renegade Writers Guild sponsored the first type-in in response to a new generation of fans with renewed interest. Throughout the afternoon, locals from all age groups dropped by the history room at the library to look at and type on the vintage machines.

With three electric machines and three manual ones, the kids were fascinated and tried several of the machines, writing short stories while trying to increase their typing skill.

Royals, Underwoods, Selectras and Remingtons were available to appeal to the most serious typewriter lover.

One enthusiast, Jack McLaughlin, who came to the type-in with his father and son, commented: “My dad just loves these machines. He just had to come and check this out when he saw it in the newspaper.”

Poet-in-Residence, Ed Robeson, was on hand and typed personal poems on the spot while fans waited. Quality stationery by Crane with matching envelopes was made available for typing correspondence letters along with stamps provided for mailing.

“The first annual type-in was a great success. We have added National Typewriters Day to next year’s calendar,” Dean said.

“Hey, return my call soon. I miss you. Well, anyways, I need help, Roy. Let me start from where it all happened. So, me and ma were driving, and there was this big truck, and he was heading our way, so ma slid off to the side and then BOOM. Ma is so mad. Mail is to help r Roy.”

Once there was a little girl named Claire. Claire lived in a very nice house with very nice neighbors and went to a very nice school, but she was not a very nice person. She was mean to her parents, her friends, her teachers, and her neighbors. Nobody knew why or tried to know why. They all thought she just didn’t want to be nice. What was really happening with Claire? She felt all alone because even though she had friends, they didn’t want to be friends with her. She had her parents pay them because everyone thought she was different because of her dyslexia. Nobody wanted to be friends with someone who couldn’t even read on their grade level. Claire decided one day that she would ask the principal if she could make an announcement and she did.

“Excuse me, everyone. Well, My name is Claire, and I’d like to tell you why I’m so mean. It’s because none of you want to be friends with someone who’s different than you. You all cast me aside, and it made me bitter at everyone. But, I’m here to say I’m sorry. I don’t want to be mean, but all you have to do is accept me into your friend groups. Thank you for listening, have a great day. (No parts of this story are real)

Once upon a time, there lived a little boy named Nanny. Nanny loved to play pranks on little animals, and if Nanny didn’t get his way, he screamed and said “I hate to prank, laugh, and scream. His friends called him ‘Polly Anna’ one day and said ‘I hate you’, and they were never friends again. The End.

Once upon a time, there lived a little bunny named John. He lived in a little tree, and there was a space where he lay. One day, he was just resting, and he heard a funny noise. There was a little mouse. It turned out to be one of his old friends. The mouse’s name was Eddy. They used to play in the bunny’s old home. They used to play dazzle ball together. Just them. They used to read books together, and they used to play hopscotch together, and jump rope, and do softball. They practically did everything together. One day they met again. They played again just like the old days. One day, there came a big storm. Eddy’s house blew away. Eddy tried to save his house but he couldn’t, so he went over to John’s house. John’s door was locked. The mouse knocked and knocked, but he just couldn’t get in. John finally heard the mouse and let the mouse in. When they both were safe inside, they gave each other a fist bump and a high five, and they lived happily ever after. The End.

No one in site but just old tractors.  Nowhere to run. Nowhere to find fuel. Just old tractors left to rest and rot, but there is one legend that is believed to be true. One tractor possessed by a ghost seeking revenge in a haunted castle, the ghost is believed to be the king’s daughter. The spirit of the ghost seems to be a tortured soul from death. Since then, the ghost of the king’s daughter has sought her revenge on the king’s body. Only the people who found the king’s body were never to be seen again. Just be aware of the king and his daughter. The End.

“Letter to a Fairy”

Thank you for your kindness during my visit to Fairyville. Everyone was so kind. I have never been to such a magical place. The beauty and sparkle will stay with me always. Fairyville will be a place I will keep close to my heart. Thank you for the fairy dust. It is a gift I will treasure always.