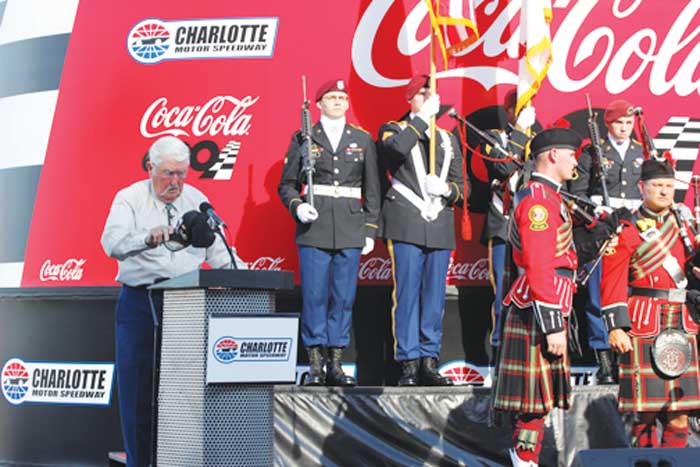 Board President, Forks of the Yadkin and Davie County History Museum

On May 28, more than 100,000 NASCAR Fans gathered at the Charlotte Motor Speedway to witness and participate in the longest race of the NASCAR season.

It is a grueling 600-mile contest, testing drivers and their crew members after countless hours in the shop and track.  The race was dedicated to US soldiers who gave their lives for freedom and liberty.

Strangely enough, lightning delayed the conclusion of the race until the early hours of Memorial Day, and the winning car had odds of 100 to 1.  The No. 3 car of RCR Racing, driven by Austin Dillon, crossed the finish line first and perhaps was the only car with a US Flag Decal.

In September of 2016, the documentary “BAR to POW: The Harold Frank Story” was produced by Forks of Yadkin and Davie County History Museum. Since that time the documentary has made its way through local churches, homes and veteran groups, and last month on UNC-TV.

NASCAR became aware of the story through a showing at RCR Racing, where the owner Richard Childress sponsors a monthly veterans coffee. Copies of the DVD were purchased by RCR causing a ripple of excitement through NASCAR and catching the eye of NASCAR Chaplain Nick Terry.

Harold Frank agreed and prepared for a six-minute speech which would be given after the drivers watched a 10-minute clip of the documentary.  Then drivers and teams would head to their cars.

Events continued to develop as NASCAR requested Harold Frank give the invocation prior to the National Anthem, followed by an F-15 Fighter Squadron flyover.  The stipulation hinged upon a prayer for which Harold Frank would have only 25 seconds to deliver.

Those of you familiar with Harold Frank and his WWII story should also realize that when asked to speak, Harold Frank has much to say with little regard for time. And due to his service and sacrifice as a WWII US Army Combat Veteran, the audience has always remained attentive to Harold’s words, but national TV works differently.

Everything is planned down to the second.

In the chapel service, Harold Frank underscored and challenged the teams to keep prayer in their daily lives. He explained that as a BAR (Browning Automatic Rifle) Rifleman that he became the best shot in the 271st Infantry Regiment and could disassemble and assemble the weapon blindfolded in 10 minutes. “If you take care of the weapon, it will take care of you,” he said.

Likewise, he told the teams “if you work hard, know the equipment, and keep prayer in your life, you’ll do well.”

Harold finished by telling the crowd “never to give up and always keep going, and to take that next step even if you think you can’t.”

While the chapel service continued, renowned sketch artist, Jared Emerson, completed a painting based upon a photograph given to him of Harold Frank during WWII.  Harold finished right on time and to a standing ovation.  Besides the drivers and their teams, the audience included several Medal of Honor holders, as well as Lee Greenwood who would sing “God Bless the USA,” and actor Channing Tatum.

Approaching the stage for the invocation and despite the heat of the track, crowd size, and noise, Harold Frank walked the stage surrounded by active duty military personnel and on national TV and stated: “Thank God I’m American. Let us pray.”

Fighting back emotions dating back to the sands of Normandy in June, 1944 and subsequent battles near Cherbourg, Merderett River and Beau Caudray, as well as being wounded and enduring 10 months as a POW, Harold Frank bowed and thanked God for bringing him home and then thanked our military “for without them we wouldn’t have the freedom that we all share.”

In the prayer conclusion, Harold also prayed for the safety of the drivers and asked for the “safe return home after the race for all the fans.”

The prayer ended right on time at exactly 25 seconds.

Right on que the National Anthem was sung and the roar of US Air Force F-15’s passed over the track.

The story could end right here except for the irony of the race.  A race that should have ended on Sunday before Memorial Day didn’t because of lightning.  A driver won in a car without gas after crossing the finish line.  The car in which he drove that day was perhaps the only car with an American Flag decal.  The winning team RCR Racing was the only NASCAR sponsor of the veteran’s coffee.

Lastly, the driver who bought the painting of Harold Frank asked that it be returned to Harold Frank.

And during the Veteran’s Coffee event last week at RCR Racing, a short documentary put together by the Forks of the Yadkin Museum showing highlights of Harold’s speech and activity at the Coca Cola 600, the painting was returned to Harold Frank.

As if preplanned, it so happened that that Veteran’s Coffee was to honor our WWII Veterans.  Harold Frank accepted the painting and then awarded it to Mark Hager, the producer of the documentary, to be placed in the future museum, Forks of the Yadkin and Davie County History Museum for all to see. Some may say coincidence but others say God works in mysterious ways.

This July 4 take time to thank our veterans, law enforcement, and first responders and pray for God’s guidance and direction. Then let each day become a memorial day for future generations with the understanding that freedom and liberty comes with a high cost and personal sacrifice.

If you would like to purchase a copy of the Harold Frank Story come by the museum office in the Leonard Reality Building at the Mocksville Town Square. I

n conclusion and in solemn reflection, may God Bless each of you and God Bless the United States of America. Have a wonderful and safe Independence Day.