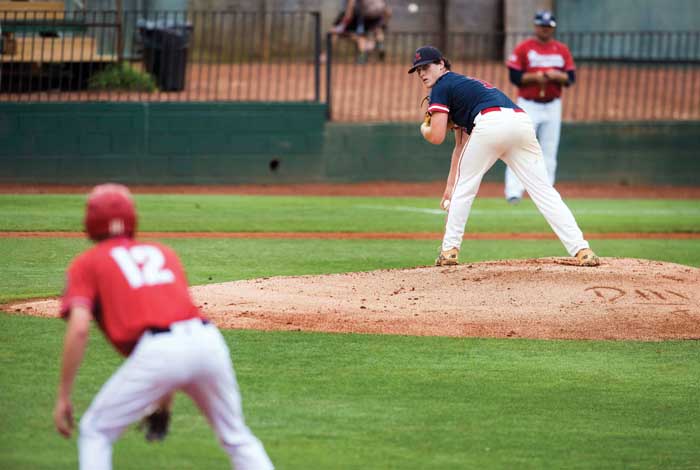 Jalen Scott of Mocksville’s Legion baseball team entered the locker room of Mando Field as Clark Kent. He came out as Superman.

Scott did it all during an 8-6 comeback win over visiting Concord on June 24. He pitched eight innings to get the win, and he blasted a seventh-inning grand slam to turn a deficit into a lead as Mocksville (9-11, 3-4 Southern Division) avenged a 10-6 loss from the night before. Concord, which was 2-0 against Mocksville this season, lost for just the second time as it slipped to 11-2, 4-1.

“I don’t think I’ve ever hit a ball that felt that good,” Scott said of the home run.

Both teams suffered self-inflicted wounds, with Mocksville committing 6 errors and Concord 4. After a scoreless first inning, the second ended with Concord in front 3-2. Two Mocksville errors sandwiched around a hit resulted in two seventh-inning runs and a 5-2 deficit.

“It was a sloppy game,” Kurfees said. “It was ugly, but we limited the damage. It could have been a lot worse than it was. Luckily, we came back in the bottom of the seventh.”

With the 5-2 lead, Concord’s defense imploded in the seventh as Jesse Draughn, Cody Smith and Landon Bandy reached on errors to set a six-run rally in motion. Tyler Campbell singled to set the stage for Scott, who stepped to the plate with the bases full.

“Coach Kurfees told me before the at-bat to take until you get a strike,” Scott said. “I took the first pitch (for a ball). The second pitch was right down the middle and I couldn’t (take it).”

It was the second fastball in a row from the Concord pitcher. Scott smashed it to left. It was the first home run in his three seasons on the Senior Legion team. It was the first grand slam of his life. It was Mocksville’s first long ball in five games.

“I rounded third base and told coach Kurfees: ‘Hey, I’m sorry but it was my pitch,’” Scott said. “It felt good as soon as it came off the bat. I had a mindset: I’ve got to get a hit right here for my team. I was sitting dead-red fastball because he was struggling and I knew he was just trying to throw a strike. I loved every bit of it.”

“We got up on the plate and started taking pitches,” Kurfees said. “Jalen sort of figured, if nobody else is going to hit the ball and score many runs, he might as well do it. So he hit one in the top of those trees. Jalen struggled at the beginning of the year, but he’s been hitting the ball pretty good (lately) and he came through in the clutch. That’s what we’ve been looking for all year. We hadn’t been hitting in clutch situations.”

Making the night all the more special, Scott continued to turn a corner on the mound. Throwing five-hit ball for eight innings with one walk and five strikeouts, this outing mirrored his previous one, a five-hitter for eight innings in a 5-3, 10-inning win over Kannapolis. He got a no-decision at Kannapolis, but he got a well-deserved first win in his fifth start. With all five of Concord’s runs against Scott unearned, he chopped his ERA to a sporty 2.64.

Campbell, who had worked just three innings all season, came on to close. He experienced turbulence, giving up singles to the No. 9 and No. 1 batters. He got a strikeout looking, but the righthander walked two of the next three. A run in, that loaded the bases with Mocksville clinging to a two-run lead. Then Campbell induced a grounder to second to nail down his first save.