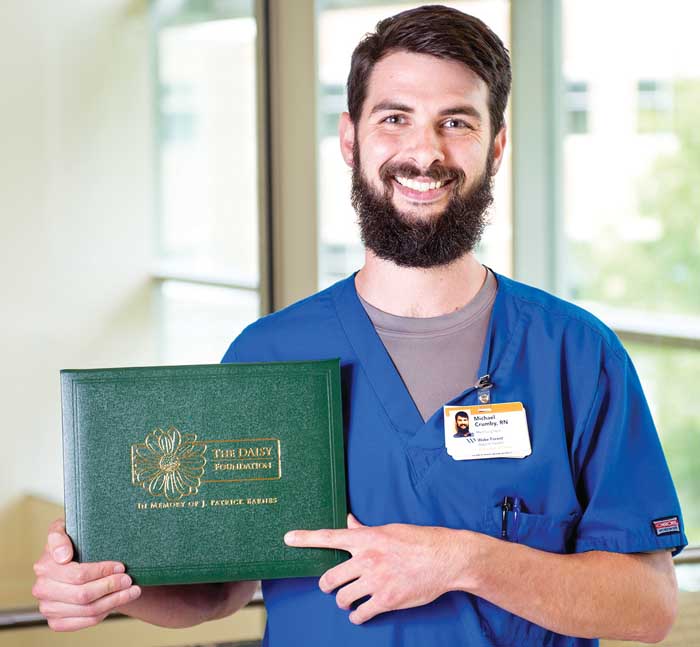 A grieving family turned a tragedy into an opportunity to give back to nurses around the globe—including right here in Davie County.

In memory of their loved one, J. Patrick Barnes, and in tribute to the exceptional nursing care he received, the Barnes family created the DAISY Award for Extraordinary Nurses. Local nurse Michael Crumby, R.N., just became the first recipient of the award at Wake Forest Baptist Health – Davie Medical Center.

In 1999, 33-year-old Barnes was hospitalized in Texas with an autoimmune disorder called idiopathic thrombocytopenic pupura. The Amarillo resident remained in the hospital for eight weeks, until his death. During this time, his family witnessed what they called “the best in nursing.”

Soon after he passed away, Barnes’ wife and parents created a foundation in his memory. They determined the purpose of their organization would be to honor nurses like the ones who cared for Barnes. The Barnes felt the best way to do that would be through an award program, so they began partnering with hospitals to offer special recognition to outstanding nurses at each organization. They named the foundation and award DAISY, which stands for “diseases attacking the immune system.”

“It has been a gift to be able to start the program here,” he said. “We want to acknowledge the hard work our nurses do, and we also want to show our community that we offer compassionate care along with world-class medicine. This award, born from such a beautiful story, allows us to do that.”

While the DAISY Award is international, each hospital offers the award at intervals based on the size of its nursing staff. While Wake Forest Baptist presents the award each month, Davie Medical Center will offer it twice a year—in May, during National Nurses Week, and in October.

Each hospital has its own DAISY Award committee that selects a recipient from a pool of nominees. At Davie Medical Center, the committee is made up of a range of staff members, including nurses, said Beth Stanley, M.S.N., R.N., emergency department nurse manager, and co-chair of the DAISY committee. The nominees, whose names can be submitted by patients, patients’ family members or anyone on the hospital staff, are presented on blind ballots. This is done to ensure the honoree is selected solely on the merits described in his or her nomination.

“We didn’t know it was Michael we were voting for when we chose our first award winner,” said Stanley. “We just knew we were selecting someone who went above and beyond for our patients.”

Crumby, a staff nurse in the joint replacement unit, said he was a little shocked when he learned he would be Davie Medical Center’s first DAISY Award recipient. Those who know him, however, were not surprised.

“Michael is known as the MacGyver of Davie Medical Center,” said Susan Bachmeier, M.S.N., R.N., chief nursing officer. “He can come up with a solution to any problem. And he’s an outstanding nurse. One of the things mentioned in his nomination is that he works with patients’ physical therapists to ensure the patient is getting the best experience. He also encourages the patients throughout their therapy sessions and ensures their pain is managed well. He does all this even though it isn’t a required part of his job.”

Bachmeier said Crumby provided valuable input from the bedside perspective when the medical center was building its new inpatient wing.

“He helped us ensure we weren’t just creating the best care space for our nurses and physicians, but also the most comfortable surroundings for our patients and their families,” said Bachmeier. “He is one of our best and brightest, and we are so proud of him.”

Bachmeier also praised Crumby’s leadership skills during the transition from the old Mocksville facility to the new medical center in Bermuda Run. “He was a leader every step of the way, functioning as a charge nurse, assuring supplies were ordered and available, and being a cheerleader for his colleagues during the process.”

The DAISY recognition comes with a number of benefits, including discounts for programs sponsored by national nursing associations, and a pin for the nurse’s badge.

The award recipient isn’t the only one acknowledged; the nursing unit receives Cinnabon cinnamon rolls. Cinnabon rolls were one of the only foods Barnes could enjoy during his hospital stay, so the Barnes family recruited the corporation as one of the sponsors of the award.

The actual DAISY Award that Crumby received is a sculpture known as “The Healer’s Touch.” The DAISY Foundation imports the awards from Zimbabwe, where they are crafted by artisans from the region.

Stanley said the sculpture is aptly named, as it describes the compassionate connection nurses like Crumby have with their patients.

Crumby said he is humbled by the healer’s touch connotation, and stated that his care philosophies are simple: consistency, communication and compassion.

“I make sure each of my patients receives the same level of care, regardless of who they are or what their situation is,” he said. “I also want to help them communicate to me what their needs are, so that I can communicate those needs well to our team. And, ultimately, I want to be sure my patients are taken care of the way I would want myself or one of my family members cared for.”

When it comes to the recognition he received for patient care, Crumby said he feels it is validation for Davie Medical Center as a whole.

“We have such a great environment to work in, with great administrators and management who give me and the other nurses what we need to provide good patient care,” he said. “This award doesn’t just acknowledge me; it shows what our organization promotes.”

“That’s the beauty of Davie,” said Ridenhour. “We’re on the cutting edge of medicine, and we’re patient centered in terms of care.”

Bachmeier said the DAISY award is rewarding to the nurse staff, in particular. “It means a lot to us to know we have this here,” she said. “It is a national award that is well known in the industry. It’s a pretty big deal.” 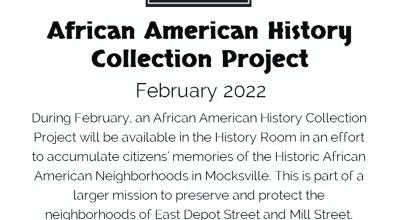 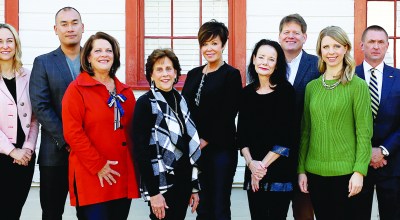