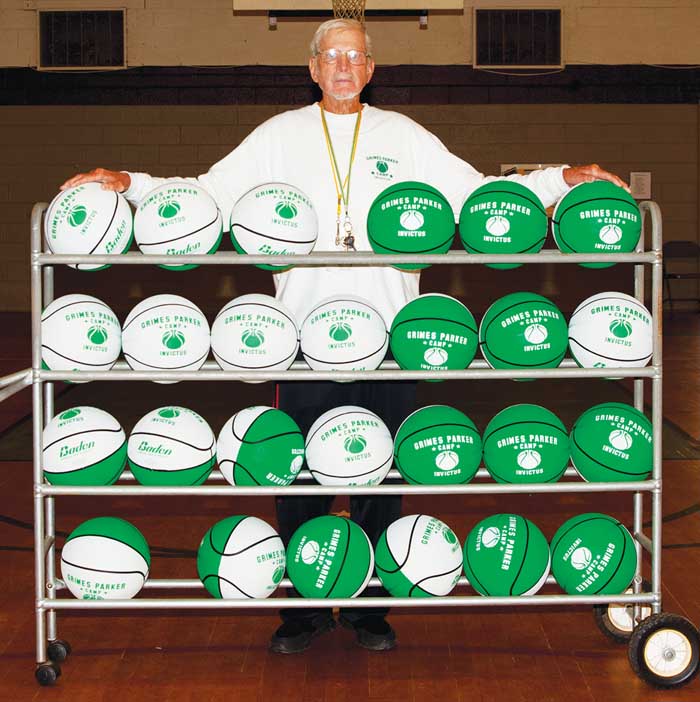 Grimes Parker with a bevy of basketballs to be given to campers.

More than 50 campers, from kindergarten to rising sixth graders, received gifts that included their uniform, a Grimes Parker basketball, plaques, a medal with the year of the camp, tennis shoes and a back pack with goodies inside. The new and popular Fidget Spinner was included in the bag of gifts and everyone was excited.

Some couldn’t wait to put on their new shoes; others held their basketballs tight. Coach Parker gave strict instructions not to bounce their new ball once they got it.

“I’ve been listening to basketballs bounce all week and I don’t want to hear any more today,”  he said. Everyone laughed and yes, some forgot.

Optometrist Dr. Steve Layman came again this year to check all campers’ eyesight at no charge.

Without the following coaches the basketball camp couldn’t go on. Their expertise of coaching skills, motivating skills, able to teach ages from kindergarten to rising sixth graders is something to watch. Parker told the campers on the last day that they were lucky. To be exposed to this type of caliber all would agree he is exactly right.

Before the campers went to lunch on the last day coach Parker gave them his home phone number. He encouraged them to call him for anything, even if they needed help with their homework.

Parker means what he says because he is a caring and giving individual.  Clement Fleming is a lot like Parker; he doesn’t care to be in the limelight for anything.  They both say it’s all about the kids.

Parker will be the Grand Marshall at Cooleemee’s July 4th Parade. The parade starts at 10 a.m. and the campers will be walking behind him to show support and appreciation of what he has done for the kids of Cooleemee.

After the parade all can enjoy the 16’ blowup water slide, free ice cream and watermelon, popcorn will be sold and the VFW Cooleemee-Mocksville Post 1119 will be selling their famous hotdogs with chips and a drink.

Gospel singing will start off the entertainment with later a DJ to keep the kids and others in a celebrating mode.

Water based kick ball will be set up, a watermelon seed-spitting contest will take place and water balloons will be part of the festivities, too.

Bring your lawn chair and come enjoy the fun.