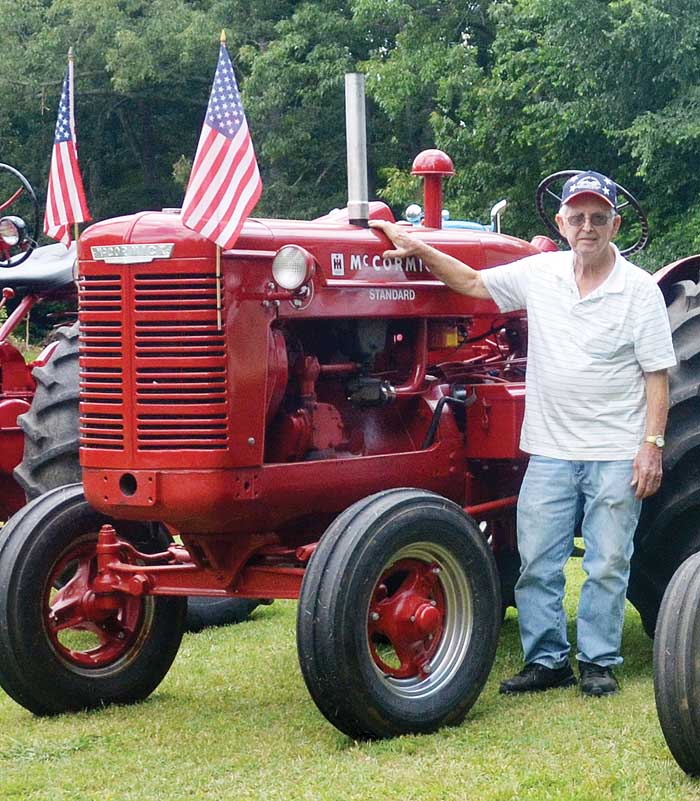 James Gray Hendrix remembers driving this tractor home from Mocksville when he was 14.

Some 73 years ago, James Gray Hendrix went to Mocksville with his father to buy a tractor.

Hendrix still has that tractor, and a slew of others, along with antique engines and other machinery. Much of it will be on display at the annual Tractor & Engine Show and Parade June 30-July 1 at the Masonic Picnic Grounds in Mocksville.

The parade is scheduled for 10 a.m. Saturday, traveling from the picnic grounds to Downtown Mocksville and back.

“I just like to hear ‘em run,” Hendrix said outside his Dulin Road shop, surrounded by fellow antique machinery enthusiasts. “It’s just a bunch of old men playing. As far as I’m concerned, this is the real Davie County.”

Growing up on a farm, Hendrix said he learned to work on the machinery. If something broke, it was up to you to fix it, he said.

He wonders, as members of the Piedmont Antique Power Association (PAPA) age, who will keep up with the old tractors.

“We’re trying to keep the old stuff around,” said Arthur Bostick, PAPA president. “Old men will come out here and say, ‘I used to have an engine like that. We ran it to draw water’.”

As many as 200 tractors could parade down Main Street for the parade, Bostick said.

Homer Potts, 94, will be the grand marshal.

Raised by his mother after his father died as an infant, Potts has lived in the same house his entire life, and helped build the buildings on the farm off Cornatzer Road.

Potts was in the U.S. Navy from 1942-44, and served aboard the Mackinac, witnessing the bombing of Hiroshima from Tokoyo Bay. After the war, he returned to Davie County, farming, married Dottie and had two daughters, Sharon and Pam. He milked as many as 50 cows on the 90-acre farm.

He rarely took vacations, but enjoyed coon hunting with friends. He was a community-minded man, and was a member of the Cornatzer-Dulin Volunteer Fire Department from 1956-1979.

The display of tractors and engines will be open all day Friday, into the evening, and on Saturday until about 3 p.m., when the winner of a 1958 N Ford raffle is announced. There will be wagon rides through Rich Park, and concessions provided by the Masonic lodges. A bounce house will be open both days. There will also be demonstrations of farm equipment.

Bingo starts at 5 p.m. Friday, followed by music by Gaining Ground. At 6:30, there will be a kiddie tractor pedal race, a women’s pedal pull and frying pan toss contest, and a wrench tossing contest.