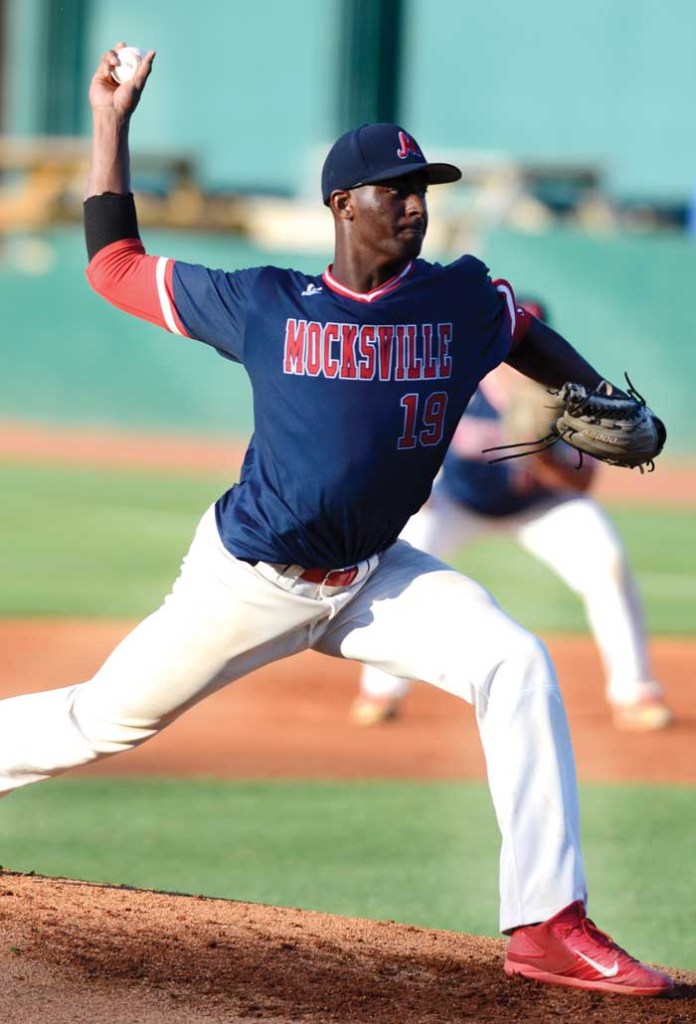 KRISTI CRAVEN/ SALISBURY POST Mocksville's Mikey Smith pitches during a baseball game between Mocksville and Rowan on June 9, 2017 in Salisbury.

The combination lifted Mocksville to a 4-0 home win over Stanly County on June 17 and stopped Post 54/174’s skid at four.

James delivered a sterling complete game when Mocksville needed it desperately. He rolled through three 1-2-3 innings. He induced 14 ground-ball outs.  He finished with a 3-hitter, walking 3 and striking out 3. He lowered his ERA from 5.26 to 3.17.

“He pitched great,” said assistant coach Todd Bumgarner, who calls pitches. “He commanded the strike zone with all three pitches and was able to throw any pitch on any count. He had them offbalance and let his defense work – and we played good defense behind him.”

“It was one of the best performances I have seen over the years,” Bumgarner said. “Johnny Mac (McDaniel) threw a gem at South Rowan years ago. Cranfill threw one vs. Mooresville. D.J. Webb had one out here one night and Ryan Foster had a couple. Tonight was right up there.”

“He did a great job,” Coach Charles Kurfees said. “He cruised.”

Mocksville developed a cushion in the fifth. After Mikey Smith singled with two outs, Campbell belted a two-run homer.

That was Mocksville’s third and final hit. It improved to 7-8 overall and 1-2 in the Southern Division.

“We’re still not hitting the ball like we need to,” Kurfees said. “We are struggling (offensively). It was a great game but we haven’t hit the ball.”

Campbell missed the previous game, a 5-2 loss at Concord. It was the fifth missed game for the star from Forbush. Yet he maintained his dominant form in his 10th Mocksville outing. He has a 10-game hitting streak. By going 1 for 3 with a walk, he has a .432 average, which is 177 points over the team’s mark (.255). He has three of the team’s five homers. He has 15 RBIs (the next guy in the category has five).

And Campbell is bidding to become Mocksville’s first .400 hitter since 2014, when Sawyer Davis hit .425 and Charlie Muchukot .407.

“They’re a good team,” Kurfees said of Stanly. “They have a good program. We played pretty doggone good.”

They didn’t get a hit, but Jalen Scott and Henry Stone both reached via a walk and hit by pitch. M. Smith added a walk to his single. Stanly (7-6, 1-1) issued eight walks as its winning streak died at four.

Kurfees marveled at the right-field play of Jesse Draughn, who is filling in for injured Guy Brunelli. A day later, Brunelli missed his fourth game with a pulled hamstring. Kurfees said he could be back on the field June 20.

“Jesse made a great catch at Rowan,” Kurfees said. “He made another great catch in right field (against Stanly). He’s getting it done. He’s got good speed and can make things happen. You can’t ask anybody to play better defensively.”

Lankford a freshman all american