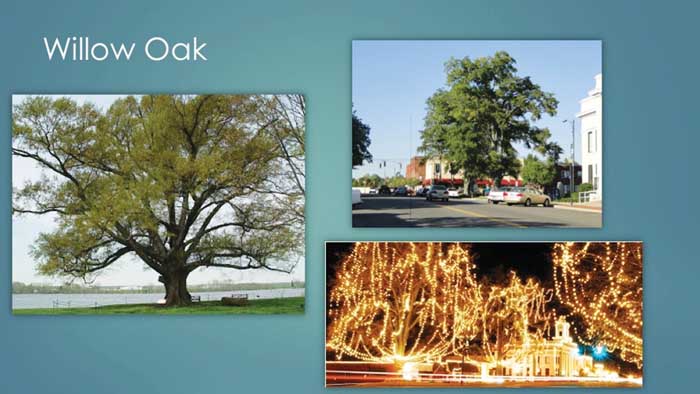 The Willow Oak - the same type of trees that have been on the square - is among the trees being considered for replacements, along with the Nuttall Oak, Shumard Oak, Princeton Elm an Deodar Cedar.

What kind of tree should the town plant in the four quadrants on the square in Downtown Mocksville?

How about willow oaks, the type of trees that were recently cut down because of disease? Maybe Shumard Oaks? Or Nuttall Oaks? Princeton Elms, or Deodar Cedar?

Members of the Mocksville Planning Board weighed on the question facing town board members in a joint meeting with that group last week.

One thing is for sure. The Deodar Cedar is not a favorite of the planning board members.

Town Manager Marcus Abernethy said an arborist who works with the City of Statesville said the disease on the old trees meant that large limbs could fall down at any minute. That arborist also recommended the trees listed above as types that would grow well in Downtown Mocksville.

He recommended the size of tree to be planted. While only 15-20 feet tall, those trees would have huge, heavy root balls. Larger trees that are transplanted also tend to die more quickly because of the shock of moving such massive amounts of roots, he said. Smaller trees also are less likely to suffer stress from wind and other weather.

But back to the trees the town will plant this fall.

The Nuttall Oak can grow to 100-feet tall with an 80-foot wide crown, a few feet per year. There are not a lot of surface roots, which is a positive, but there are a lot of acorns, which is a negative.

Folks should be familiar with the Willow Oak, because that is the tree that graced the square for 80-something years. The biggest negative board members pointed out are the small, thin leaves, which wind quickly spreads around town. It grows 40-60 feet tall with a 30-40 foot crown.

The Shumard Oak grows to 40-60 feet tall at a rate of 1-2 feet per year. A selling point is the deep red/orange fall color.

The Deodar Cedar, the only evergreen being considered, grows to 40-70 feet in a pyramid shape.

“All of these trees would grow very well here,” Abernethy said.

Planning board chair Brian Williams said he prefers one of the oaks. Member Connie Kowalski suggested the Willow Oak, because that is what people are used to.

Mayor Will Marklin said there are people in town who want to start a tree fund, even though the town has in the budget it adopted last week money for replacing the trees. The arborist, he said, estimated cost of the trees at $500 to $1,000 each.

He also suggested, that while water lines are being replaced, the town work with the Department of Transportation to replace the stoplights on the square, going away from the wood poles with lines and a big box to two metal poles with arms to hold the stoplights, with wiring underground. The cost to the town would be about $56,000.

“That is the center of our town,” Williams said. “It’s what brings us together. I think that would be a wise investment. It makes sense to do it while things are happening. The time is right.”

“Beautification is a drawing card,” planning board Stevie Dulin said.

“Your input is crucial,” Abernethy told the planners. “This is going to look nice when it’s completed.”

Graduation day to be ‘the best time ever’