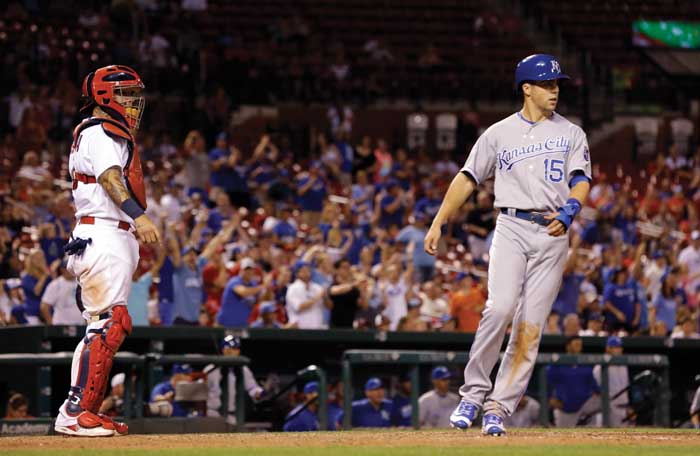 Who writes this script? Who’d believe it if anyone actually did?

Whit Merrifield began the 2017 season in Triple A. He is now bidding to represent the Kansas City Royals on the American League All-Star team.

How it went from there (Triple-A Omaha) to here (longest hitting streak of the season in the major leagues at 19) is one of the best stories in baseball right now.

“It’s cool,” Merrifield told MLB reporters. “My consistency has been good. Every at-bat I go up and try to have the best at-bat I can. Whatever happens, happens.”

Merrifield delivered stop-the-presses stuff on Memorial Day at KC’s Kauffman Stadium, barely missing the cycle in a 10-7 loss to Detroit. He came within a single of KC’s first cycle since George Brett in 1990.

He opened the scoring in the third inning, sending a fastball down the left-field line. It stayed fair for a solo home run. In the fourth, he tripled with a man aboard. In his next at-bat, he doubled.

The only thing left for the hitting cycle was the single. Late in the game, he came to the plate with a chance for the seventh cycle in club history. The crowd rose to its feet. Although he flied out to right, it was an unforgettable moment.

“That ovation I got … it was special,” Merrifield told reporters. “That’s something I’ll take with me for a while. That was really cool.

“I got a changeup up. I put the barrel on it. I just got under it. I would have liked to have had it back.”

“He had a great night,” manager Ned Yost told reporters. “I sat there at his last at-bat trying to remember if I’ve ever had a player that hit for the cycle. I think you would probably remember that, and I didn’t remember one. I was really rooting for him.”

In a 6-5 home loss to Detroit on May 31, Merrifield was hitless when he came to bat in the eighth. He singled to keep his hitting streak alive.

Same thing in Friday’s 4-0 home win over Cleveland. Merrifield was hitless entering his final at-bat. He doubled to keep the streak alive.

In Saturday’s 12-5 win over Cleveland, Merrifield lashed a two-run double in the fifth to extend the streak.

On Sunday, the Royals were blanked 8-0 by Cleveland, the league-high sixth time they’ve been shut out. But the Indians’ dominance could not slow Merrifield’s heartstopping run. He went 3 for 4, raised his average to .307 and extended his hit streak to 19 games.

The meteoric rise has seen Merrifield become the top hitter on the team and post the club’s longest hitting streak since 2011. Oh, and one last thing: During the streak, he’s hitting .409 (27 for 66) with a .636 slugging percentage.

The Royals are struggling at 24-31, tied for fourth in the AL Central Division. They’re six games behind first-place Minnesota.