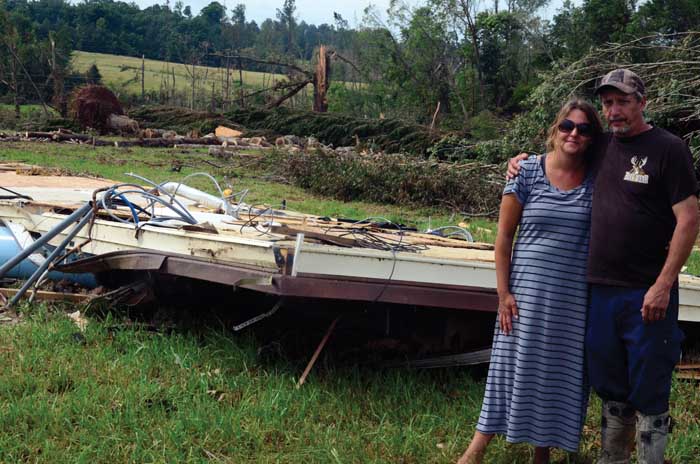 Tina and Mike Holt in front of the remains of their home, which went for a 50-yard ride in the tornado.

Her home is gone. Her belongings were scattered for dozens of miles.

She had just made it home on Wednesday, May 24 from her job at Cornatzer Elementary. The weather was bad, and as she entered her home off Four Corners Road near the Davie/Yadkin line, the power was out and her weather radio was sounding off. Then she heard a strange noise.

She looked out and realized there was no time to go anywhere. She grabbed Trigger, the family’s dog for 14 years, and hunkered down by the bed.

The next thing she knew, she was in a pile of rubble. Battered and bruised, she was alive, made it out of the rubble and began screaming for help.

Hers is perhaps the most dramatic story to come from a tornado that caused damage in Davie County from the US 601 North/NC 801 area to Holt’s house, before heading into Courtney and causing even more damage.

Although Trigger didn’t survive the storm, she did.

Davie Sheriff’s officer Bob DeWitt agreed. He was the first on the scene to assist Holt, as she was taken to the hospital for treatment of a cut to the head and bruises.

“That woman had the hand of God on her to protect her through that,” DeWitt said. “That tornado took her for a ride.”

Davie Emergency Management Director Jerry Myers agreed. The EF2, or 120 mph wind tornado, hit the home head-on, picking it up and putting it back down 45 yards away. National Weather Service experts told him because of the difference in pressure inside a structure and outside during a tornado, “the home basically exploded.”

Even fish from their nearby pond were pulled from the water onto the ground.

DeWitt and EMT Andy Lipscomb were two of the first emergency responders on the scene, heading toward where the storm hit after learning a tornado had touched down near Cool Springs and was headed northeast.

“When we got to (US) 601 and (NC) 801, we knew it was going to be bad,” Dewitt said. Knowing most emergency vehicles would be headed in via Four Corners Road, they went to the back side, and came in through Bowman/Courtney Church roads. One of the first things he heard was a woman yelling “She’s trapped, she’s trapped.”

Holt was the one trapped, and walked away from the scene with Dewitt. “While that was bad, that woman is alive for her family,” he said.

She called her husband at work, and her daughter, telling them they had lost everything.

Holt and husband Michael have been on the scene since the storm, staying in a hotel while a donated trailer is being hooked up for their use. They had insurance, and plan to rebuild on the site.

She loves to garden, and had built a “happy place” near a creek. Her brother painted her a sign that said, “My Happy Place.” That sign now stands in front of where her home once stood.

It has also given them faith in their community. People were there immediately wanting to help, and they’re still there, individuals, groups from churches. “The community has been wonderful,” she said. “It’s been amazing. Strangers, people I have never met and probably will never meet.”

Myers said that 32 residential structures were damaged in Davie County. Early estimated of damage put it at nearly $1 million. The county declared a state of emergency that night.

For those wanting to re-build, county permit fees have been waived. They also won’t have to pay for taking debris to the county landfill if they get a letter from Myers.

He praised local firefighters who quickly worked to open roads and access to homes, and for staying on the scene and returning to help in any way they could. Members of the Courtney Fire Department were still going through the areas Monday, seeing who needed help, and passing out bottles of water.

The National Weather Service said the tornado was 100 yards wide at one point, and traveled for about two miles.

Holt’s belongings, however, are another story.

Chad Tucker, a reporter for Fox8 WGHP televison, saw a posting on Facebook where a man north of Sauratown Mountain had found a photograph as the storm passed. That photograph was of Holt’s daughter, and had traveled some 35 miles before floating back to the ground. Tucker posted it to his site, and her daughter, Ashley Baity, saw that posting.

“I think that it was a higher power,” Baity told Fox8. “God telling us that it was going to be OK and that we are going to pick up the pieces.”