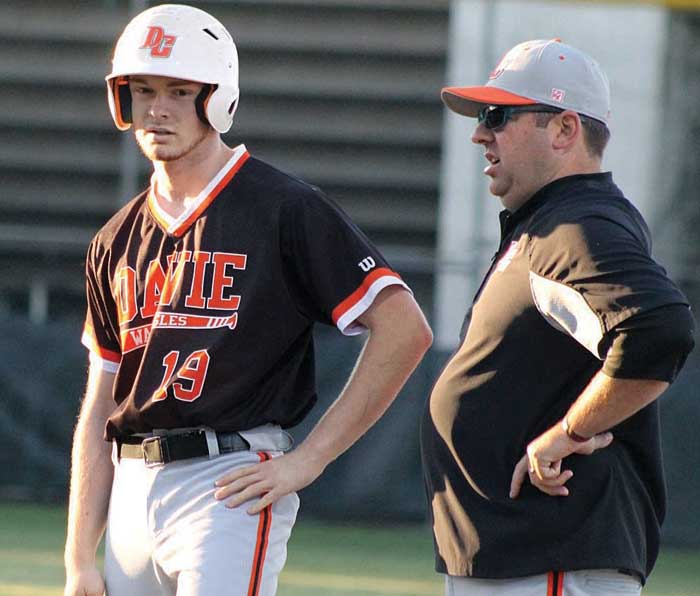 In the first round of the 4-A playoffs at Lake Norman on May 10, Carson Whisenhunt and Chris Reynolds of Davie’s baseball team put exclamation points on their excellent seasons, holding up their end with stellar pitching and hitting, respectively.

But Davie’s offensive struggles piled up all season and nothing changed there as Davie barely missed a major upset, losing 1-0.

The second-seeded Wildcats improved to 23-3 with their 10th straight win. Their only losses have been 3-2 to Davie on Feb. 27, 9-6 to South Iredell and 3-2 to Alexander Central. They captured the North Piedmont 3-A/4-A Conference.

The War Eagles nearly shocked Lake Norman again before finishing 12-13. This one was reminiscent of their last game, a 2-1 loss to West Forsyth in the Central Piedmont Conference Tournament semifinals.

Davie wasted numerous scoring opportunities against lefthander J.P. Perez, who walked two and struck out seven in 5 2/3 innings. He reached the pitch-count limit and exited after 112 pitches.

Lake Norman did not break the 0-0 deadlock until the bottom of the sixth. In the top of the first, Reynolds singled but was erased by a 6-4-3 double play. After Perez set down seven in a row, Reynolds singled in the fourth. Beau Byerly singled and Whisenhunt walked to load the bases with one out. An out at home off a comebacker, followed by a fly out to right, got Perez off the hook.

In the fifth, Landon Bandy singled and advanced on McKay Chamberlain’s sac bunt. When Reynolds singled, Bandy was held up as Davie had runners at the corners. But a strikeout squashed the threat. In the sixth, Cody Hendrix reached on an error and Whisenhunt walked as Davie had something cooking with no outs. The next three batters, though, were retired to keep things 0-0.

“It’s rough, especially when you know you have every opportunity to win it,” Byerly said.

The Wildcats finally broke through against Whisenhunt in the sixth. The cleanup man singled with one out and stole second. He scored on a two-out hit.

Davie threatened one last time in the seventh as Chamberlain walked with one out and Reynolds followed with a single. But a strikeout and fly to center closed the book on the War Eagles.

Davie outhit Lake Norman 6-5. Whisenhunt, a 6-3, 185-pound sophomore, has been quite good virtually all season and he was flat-out great against the high-profile Wildcats. He pitched a five-hitter in 92 pitches, faced 25 batters and delivered his sixth complete game in 12 starts.

“He threw lights out,” Byerly said. “We started off the game with an error. Two months ago, that would have affected him to where he would have gotten out of his element and lost his cool. That was the most disciplined, under-control game he’s thrown all year.”

Whisenhunt finished 6-5 with a 2.12 earned-run average, striking out 66 in 66 innings. College coaches from VMI, Charlotte and Gardner-Webb were on hand to check out Davie’s sophomore.

“Lake Norman’s got a pretty stout lineup,” Byerly said. “They won again (4-3 over Reagan in the second round), so that tells you a lot about them. It was a hostile environment – when they’re ringing bells, beating chains and all that stuff – and he really showed composure.”

College coaches were also there to see Davie’s junior catcher, Hendrix. He threw out one runner, but it should have been three.

“Lake Norman attempted (to steal) twice, and both times we had them thrown out and we failed to make the play,” Byerly said. “He back picked at first (in the fifth) to get us out of a tough situation. He nailed the guy. He loves to do that. He lulls them (to sleep) and throws the hammer.

“(Whisenhunt and Hendrix) have matured more in the last month than I’ve ever seen from two players in my life. They’re getting a lot of looks right now because of that. VMI loves Cody. They are salivating for him. Charlotte is also talking to Cody a little bit. He’s a football player and they love that. (VMI’s) coach said to me: ‘I look for football players. He has the stature we look for, he has a cannon, and he’s a backstop behind the plate.’”

There was at least one happy moment offensively. Reynolds – who went 4 for 4 to account for all but two of Davie’s hits (Byerly and Bandy had one each) – entered his last at-bat in the seventh with a .397 average. By getting his fourth single of the night, he did something that has only been done 23 times by 20 guys in Davie’s 61-year history: He joined the .400 club. At .405, he produced the highest average in six years (Corey Randall hit .506 in 2012).

At shortstop, Reynolds, who will walk on at Charlotte as a quarterback, rolled up 59 assists against five errors.

“I’ve said it 8,000 times. In all my years of coaching, Chris is the best all-around kid I’ve ever, ever met,” Byerly said. “He does everything. His attitude and character are the reasons he’s like that. Beau says all the time: ‘Daddy, we can play anything and he wins. Anything we do – whether it’s ping-pong or whatever – Chris wins.’ He’s just a dang competitor and nothing – nothing – ever rattles him. He gets it. He’s the best shortstop we’ve had since I’ve been here (five years). Everything goes through Chris, just like football.”