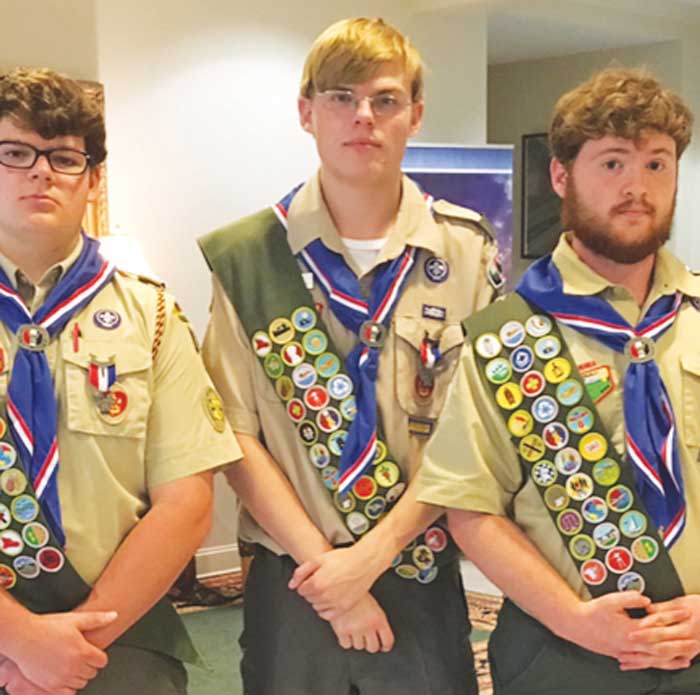 These Eagle Scouts were honored at Bethlehem United Methodist Church.

Three Davie County Scouts were awarded the highest rank in Boy Scouting during an Eagle Scout Court of Honor on Sunday, April 23  at Bethelehem United Methodist Church on Redland Road in Advance.

Bryan Ogle earned 37 Merit Badges in his Scouting career, and participated in 93 nights of camping. He was tapped into the Order of the Arrow in 2012 and attended the ordeal later that year, and became a member of the brotherhood the next year.

Some of his most memorable Scout experiences: spending the night on the USS Yorktown; learning to scuba dive; and flying in a small plane for the Aviation Merit Badge.

He has been active in Scouting since he was a Tiger Cub, going through all the ranks as a Cub Scout before transitioning to Boy Scouts. He has enjoyed having his father, Bryan “Scot” Ogle, serve as a Scout leader, making many memories together.

Bryan has also served as a chaplain aide, instructor and patrol leader. He earned his Eagle award on Nov. 8, 2016.

For his Eagle project, he gathered a team of Boy Scouts and worked with the City of Winston-Salem Fire Department (where his grandfather had retired after many years of service) to identify 100 fire hydrants in need of painting. The color of the hydrants represent the amount of water pressure and allows for quick recognition by firefighters.

Each of the identified hydrants was scraped and repainted under the guidance of Station 15 firefighters.

He plans to attend Western Carolina University this fall, majoring in graphic design.

Giuseppe Fanale started as a Bear in Pack 732 Cub Scouts while in the third grade, earning the Arrow of Light in 2010, the same year he entered Boy Scouting.

In 2012, he earned the ranks of Tenderfoot and Second Class, First Class in 2013 and a Star Scout in 2014, when he was inducted into the Order of the Arrow.

In 2015, Giuseppe went to Philmont Scout Ranch in New Mexico and was converted to Brotherhood in the Order of the Arrow. He became a Life Scout and completed his Eagle project in 2016, passing the Eagle board of review in 2017.

He earned the 100 Nights of Camping award and has hiked many miles.

Giuseppe served as Quarter Master and as instructor for Troop 732. He has been an instructor in the troop for the past several years and enjoys helping younger Scouts.

Some of his most memorable Scout experiences include: hiking Philmont, having fun at summer camp, taking Merit Badges including coin collecting and small boat sailing, working with the PLC, and spending time with and befriending members of his troop.

Giuseppe is continuing in Scouting as a Venture Scout. He will attend Appalachian State University in the fall, majoring in history.

John Passero is the son of Suzanne Passero and the late Nick Passero.

In addition to holding leadership positions in his troop and serving as Den Chief for the Webelos, John earned 35 Merit Badges, participated in more than 100 nights of camping, and is a member of the Order of the Arrow.

Some of his most memorable Scouting experiences: building and sleeping in a snow hut in sub-zero temperatures; participating in a 100-mile hike during record flooding at Philmont; flying a small airplane while working on his Aviation Merit Badge; staying on a wake board while Mr. Andrews tried to throw him off; riding one of the longest zip lines in North America at the 2013 Jamboree; and spending the night on the USS Yorktown in South Carolina.

A Venture Scout, he will attend Virginia Tech, majoring in mechanical engineering.

Geraniums a hit with BR club