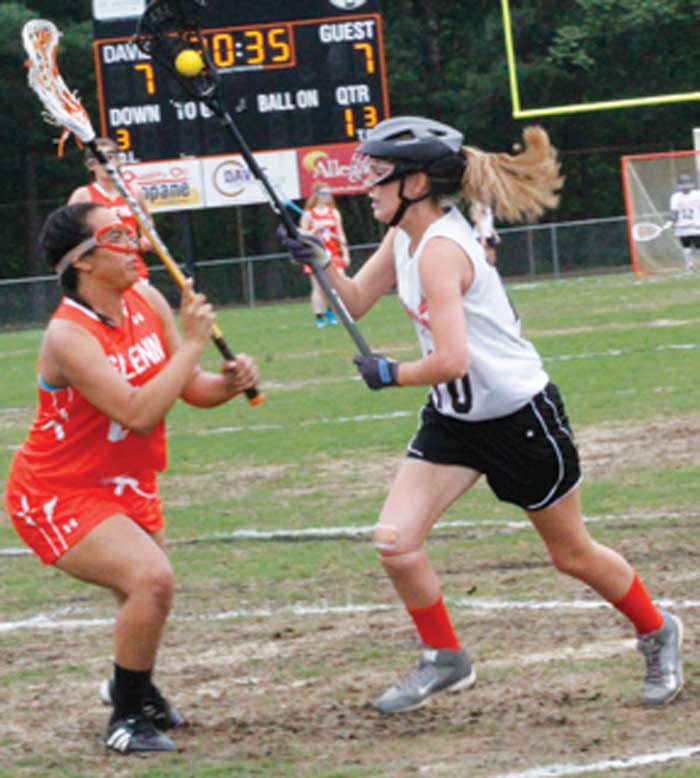 After a season filled with weather and scheduling issues, Davie’s first ever varsity girls lacrosse team came together for two wins. Coaches were Laura Kiricoples and Marjorie Foster.

The season opener against state powerhouse Reynolds on March 3 had an expected result of a 19-3 defeat. Senior midfielder Kailan Thomas had all three goals, but the real story was senior goalie Hope Allen, who stepped into the goalie circle against a great team with only one day’s practice ever at goalie. A last-minute unexpected absence made the change necessary and she stepped up big with 10 saves.

“She may be the smallest on the team, but she has a big-time competitive streak in her,” Foster said.

The varsity followed with another big team in Reagan. The team played much better after that initial shellshock at Reynolds. Jill Staley had two goals and freshman Jessie Crosby and Thomas had one goal. Emery Rosenbaum had an assist from back attack. Allen had another 10 saves at goalie.

After suffering through four games cancelled by Carver, Davie had to face rival West Forsyth on March 24. “We were looking forward to playing an evenly-matched team, but the Carver games never materialized,” Kiricoples said. “We were disappointed in the cancellations and realize how difficult this had to be for the parents and especially the players.”

Davie faced West Forsyth, another state- and nationally-ranked team, and held its own. The 22-7 loss saw the team improve by leaps and bounds. The defensive rotation of seniors Bailey Walsh, Mary Ellen Lewis, Loren Myers, junior Moriah Lane, and sophomores Alexis Dulin and Morgan Athey stepped up and came together as a team.

“Defense in this game is very different than most understand,” Foster said. “The rules are strict and spacing is the key. The concept is confusing at best, and to be honest, it seems to change each game depending on the referees.”

Davie entered the game on March 30 with Mt. Tabor with added confidence. “All the Forsyth County schools have had teams for a long time, so we are playing catchup with the skills and rules,” Kiricoples ssaid. “For us to only be a second-year team, our girls have really stepped it up and have learned a lot from playing teams with much longer experience.”

The game with Tabor was “a pretty close battle until we just ran out of legs,” Foster said. “Senior Gracie O’Brien stepped up for us and played attack and middie when needed. She’s our utility offensive player.”

Davie ventured up the mountain to Boone for a match with Watauga on April 12.

The score was back and forth the entire game, but a couple of free eight-meter shots in the end cost Davie.

“They are a really strong team but we matched up pretty well. We had to bring JV players up, and sophomore Morgan Flores stepped up and started on back defense,” Foster said.

North Davidson postponed the original scheduled match and the rematch scheduled for April 24 was rained out. Following spring break and multiple rain days, Davie took the field for the first time in two weeks against West Stokes. The game was back and forth with Davie behind 7-5 at the half.

“They had fire, knowing that they let Watauga slip by us and really pulled together in the second half. Coach K and I told the middies to roll and go to goal at every opportunity, and it paid off with 10 goals in the second,” Foster said after Davie rallied for a 15-9 victory.

The defense of Athey, Walsh, Dulin, Myers and Flores held WS to two goals in the second.

“That was the best half all year by far, and Hope saved nine goals in the half,” Kiricoples said. Crosby had two assists and Riordan one. Goals came from  Thomas (five), Crosby (four), Foster (three) and Riordan (three). This was Davie’s first win of the varsity season.

The following day, Davie played its final game at the current campus against Glenn.

“I was very concerned going into this makeup game on consecutive days,” Foster said. “Our runners’ legs were tired after West Stokes, we lost starter Jessie Crosby to a knee injury and Sierra was battling blisters.”

Sophomore midfielder Foster came out on fire, putting up four goals in the first half. Thomas and Staley had one each, pulling Davie within a 7-6 deficit at the half.

“Halftime discussions centered around the fact that we came back from 7-5 down against West Stokes, so they knew they could do it,” Kiricoples said. “These girls definitely didn’t want their last game at Davie to be a loss.”

Davie changed its defense to double team Glenn’s best player and stop No. 1. Davie put up three straight goals to take a 9-7 lead with 15 minutes to play. Glenn scored and Davie answered to go up 10-8. Around two minutes to play saw Glenn score to cut Davie’s lead to 10-9.

“We pulled out the four corners with stall ball to maintain possession,” Foster said. “Those two minutes lasted forever. The clock stops on every whistle under two minutes, and Glenn kept fouling to try and get possession. It got pretty rough. They did a great job playing keepaway until an errant pass with 20 seconds to play cost us a turnover.”

Davie’s defense did a great job of stopping their No. 1 from going straight to the goal, but had a foul called with 9.2 seconds to play. A free eight-meter shot on goal for Glenn’s best player put goalie Allen to the test. She stayed in and stopped the ball within an inch of the goal line, and then held it to run out the clock. Davie got goals from Thomas (four), Foster (four) and Staley (two) and an assist from Riordan. Allen had eight saves, including seven in the second half to seal the deal.

Davie (2-5) finished on a high note in its first varsity season. Davie fielded a JV team as well.