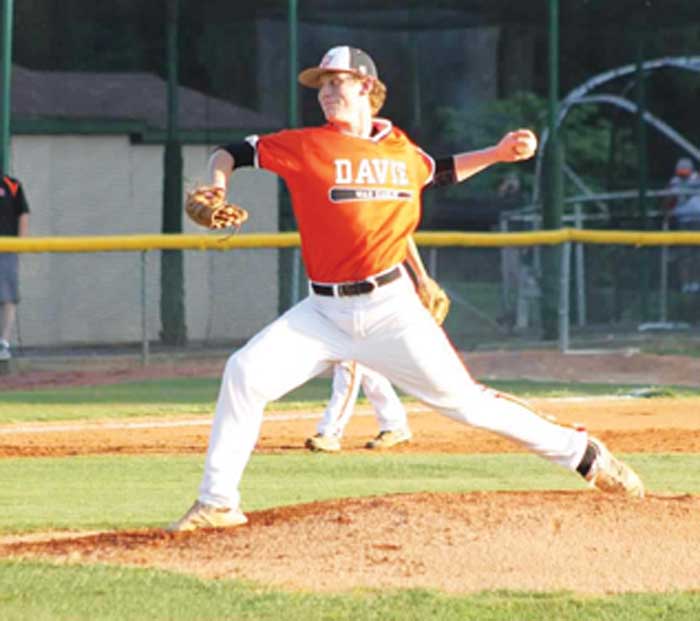 Carson Whisenhunt fires a pitch for the War Eagles.

For Davie’s varsity baseball team, it was supposed to be a good week as the War Eagles faced last-place Parkland twice, and everything went according to plan as Davie rolled up 11-1 and 10-0 wins.

The first meeting against Parkland on April 26 was a special occasion as the War Eagles bid farewell to Rick Park, their home for 61 years.

Carl Jacobs, who played on the first Davie team in 1957, was on hand.

“We recognized Sonny Kurfees and Ricky Lagle for running concessions,” coach Bobby Byerly said following an 11-1 win in five innings. “We brought them out on the field. We thanked Sonny for all his years, being Mr. Baseball of Davie County. Rustin (Harpe) and the (grounds) crew came out there. We recognized them for all their work on the field. Then we had former players come out.”

The War Eagles jumped Parkland’s starting pitcher for four runs in the bottom of the first, and they poured it on in the fourth (three runs) and fifth (four runs).

Guy Brunelli enjoyed the biggest offensive day, going 2 for 3 with a double, triple and five RBIs. He doubled the opposite way down the left-field line. He drove the triple to right-center. Just like that, he became the team’s RBI leader with nine.

“Both (hits) were with two strikes,” Byerly said. “He had a two-strike approach. He choked up, spread out and put the ball in play – and with authority. He said it was his first career triple. So he had a great game.”

Parkland’s run was unearned against Whisenhunt, who pitched a one-hitter with no walks and 12 strikeouts in 79 pitches.

After hitting just four homers through 21 games, Davie clubbed half that many in one evening. Roberts hurled the shutout, throwing a two-hitter with one walk and 11 Ks. At 5-3, he tied Whisenhunt for the team lead in wins. Zach Hudspeth worked the seventh, striking out the side in order in 12 pitches.