Rock-A-Thon raises over $9,200 for senior services 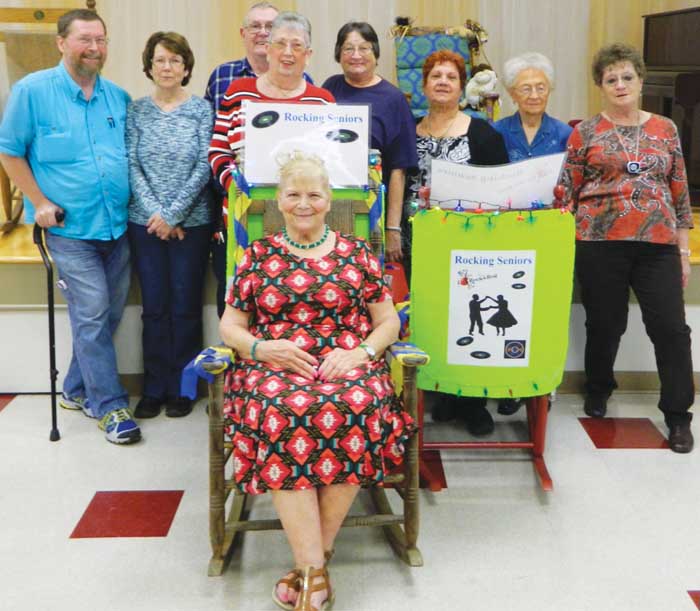 Participants formed teams and secured sponsors for their time rocking in the chairs. The community was invited, where they could purchase food and enjoy non-stop entertainment and door prizes.

The entertainment line-up this year featured a variety of acts that appealed to all ages. Senior Services’ new Cheerleading Squad, “Davie Guys & Dolls,” kicked off the event with their first public cheer.

The Boogie Brigade’s line dancing routines and the MADE aerobic dance class ramped up the energy of the crowd.

Ryan Short entertained children and adults with his magic act and balloon animals. The crowd enjoyed several games of bingo, with prizes donated by Lowes Foods.

Elvis, better known as Bobby Davis, finished the show with back up from Jesse Allard.

This year was a record crowd, with approximately 260 in attendance. Twelve teams worked hard collecting sponsors for their time in the rocking chairs. A friendly competition ensued between the teams, and the Chart Topper board at Senior Services was updated almost daily to show which team was in the lead with donations. Each team also decorated their chair and those in attendance voted on the one they liked best.

In the end, the Rocking Seniors earned bragging rights for favorite chair.  The Boogie Brigade raised the most money with $1,770.

Money raised this year totaled more than $9,200, which will go to support the programs and services offered by Davie County Senior Services.

“Once again this year we wish to thank everyone who rocked, donated money, entertained the crowd as well as those who attended the event,” said Kim Shuskey, director of Senior Services.  “We had a record setting year, both in attendance and amount of money raised. It is very touching to see the how hard our participants worked to collect and donate money to give back to the agency that they enjoy throughout the year.  We appreciate all of the support.”

Davie Senior Services is a county agency that provides programs and services to adults 55 and older.  To learn more, call 336-753-6230, or visit the Mocksville site at the Bobby H. Knight Senior Services Building, 278 Meroney St.

May a busy time for gardeners