Davie EMS among the best 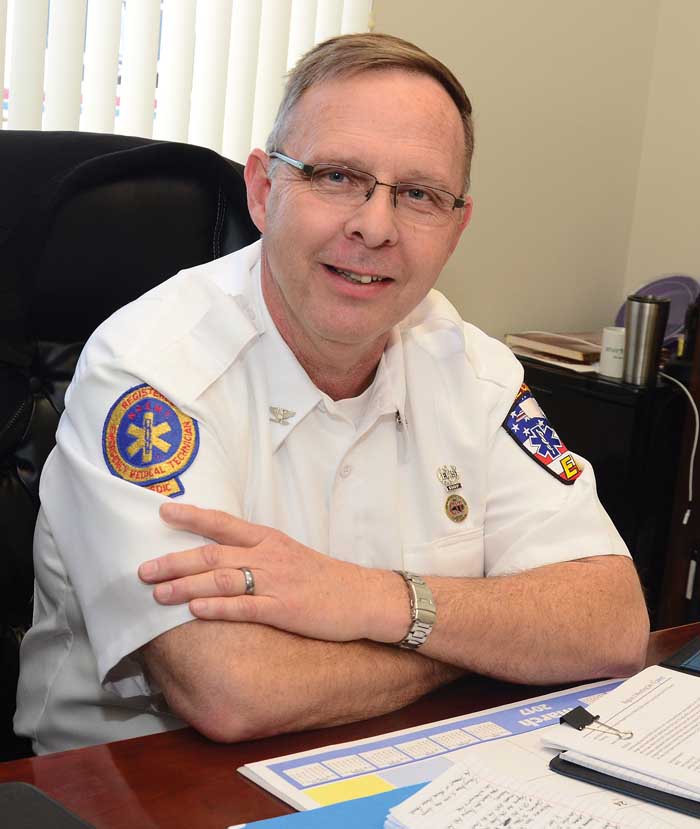 Davie EMS Director Bryan Byrd is proud of his employees.

By this time next year, folks in the Farmington area will have life-saving equipment and trained personnel a lot closer.

An ambulance will be stationed there at all times.

EMS Director Bryan Byrd said the new station will allow space for two paid county firefighters, as well as two EMS personnel. The county will still have ambulances at the headquarters in Mocksville, at a satellite station on U.S. 601 South near Greasy Corner, and at the Advance Fire Department.

The key, he said, is getting to a patient more quickly, especially in cardiac emergencies.

“It was a huge area where we didn’t have any coverage,” he said. The goal is an eight-minute response time, a standard from the American Heart Association. Within four minutes, brain damage is possible. After eight minutes, irreversible damage is possible. The next possibility is death.

“That area is perfect for us,” Byrd said. It opens up quicker service to the northern part of the county, and will be closer to Pinebrook Elementary, North Davie Middle and the new Davie High School. More people in an area means more calls.

Byrd credits dedicated employees and training for keeping the county’s record on responding to cardiac emergencies among the best. It received the Mission Lifeline Silver Award from the American Heart Association based on the recognition of heart problems and the success rate on CPR calls.

“We’ve changed the way we do CPR, and the drugs we use,” Byrd said. Last year, 50 percent of patients re-gained a pulse after none was detected, 38 percent survived. “That is a phenominal rate, due to techniques, and training, training and training.”

The national level is in the single digits.

Davie EMS employs 44 full-time paramedics, 36 part-time paramedics and EMTs, using five trucks, including two new ones on the way. Two are in Mocksville, one in Jerusalem, and two in Advance. One of the Advance trucks will be moved to Farmington when that site is open.

Capt. Joseph Ashburn, training officer, also helps train volunteer firefighters, first responders, law enforcement officers and county employees. A defribillator machine has been placed in all county buildings, and employees have been trained in each place on how to use them. All county employees were offered CPR training.

That cooperation between departments is helping to keep people safer, Byrd said. “They know us and we know them. There is a lot more confidence in each other.”

Capt. Andy Lipscomb, the operations chief, rounds out the office staff, along with administrative help. They take turns going on calls.

In the last three and a half years, call volumes have increased 36 percent, Byrd said. He tries to keep his employees up to date on trends, such as the opiod crisis and mental health issues. EMS, E911 and law enforcement and Cardinal Health are training on ways to recognize and help mental health patients. He estimates that about 24 percent of Davie’s calls are related to mental health issues.

Responding to emergency medical calls can be dangerous, and EMS officers going on certain types of calls are getting protective vests. And there’s more training on what to do in violent type situations.

With the opening of Wake Forest Baptist Davie Medical Center, Byrd expects the department to become busier. It already has, he said, because more and more people are going to the emergency room there, and sometimes need transporting to another medical facility.