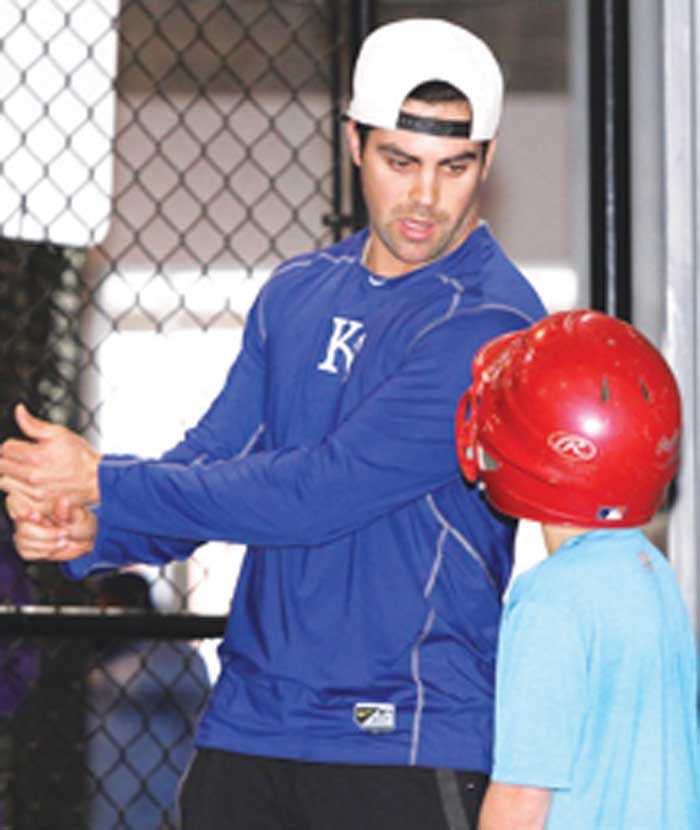 All those years in the minor leagues and Advance’s Whit Merrifield wondered if it would ever happen – that ultimate dream of making it to the big leagues.

The clock was relentless, but Whit was determined. He always has been.

And last May, the call finally came – after close to six years and some 700 games in the minor leagues, Whit Merrifield was being called up to play for the Kansas City Royals.

“It was a long road for me – being drafted by the Royals, an organization full of young talent,” said Whit, a former standout at Davie County High School and the University of South Carolina. “It usually takes three, four, five years to get to the big leagues. At about the three-year mark is when the Royals got really good. It was a situation where there wasn’t any room. They were a World Series team in 2014 and 2015. There’s only certain things I can control.”

Once he made it, Whit was an instant sensation, setting a team record with hits in his first 11 career starts.

“I got off to a good start, which was important to me to make a good first impression,” said the versatile Whit, who got his first start in left field before settling in at second base for the Royals. “I did my best hustling, showed up early, did the things that for a player like me needs to do to stick around.”

Whit, a rookie having a breakout season at the age of 27, proved to be a sparkplug for a struggling defending World Series championship team needing a jolt.

In his first 22 games, Whit was leading off and hit .330 with 11 extra-base hits, 15 runs and seven RBIs. Plus, he can play any position in the infield or outfield – offering his team tremendous flexibility.

After the torrid start, Whit cooled off in July and was eventually sent back to Triple-A before coming back up to Kansas City in September and having a good final month. For his first big league season, he had a solid .283 batting average with two home runs, 29 RBI and eight stolen bases in 81 games.

Back home in Davie County in the offseason with his family (his dad, Bill, was a star in college at Wake Forest and played about the same amount of time in the minors but never made it to the big leagues), Whit was looking forward to going to Arizona in the major league camp and preparing for the 2017 season.

“I’m going to spring training with the mindset that I’ve got to compete for a job,” he said. “Last year they bounced me around a lot, but having the void at second base, I have a feeling I’ll probably be playing a lot more at second base this spring than previous years.”

Long before making to the big leagues with the Royals, Whit was best known for delivering the game-winning hit for the University of South Carolina in the 2010 College World Series.

That hit in the 11th inning against UCLA gave the Gamecocks their first NCAA title and set off a wild celebration for everyone to see on ESPN. Young Whit was a star, and it still remains his favorite sports moment – even eclipsing making it to the big leagues.

“It’s pretty unbelievable – a situation that kids dream about, and I fortunate to be in that situation and take advantage of it,” Whit said. “I didn’t realize at the time what a big deal it was until we got back to Columbia. It was South Carolina’s first national championship, and to be the guy that knocked in the winning run, I was welcomed in a way that I never imagined. It was really cool and definitely the highlight of my baseball career.

“Getting called up to the big leagues and hitting my first home was an incredible lifelong dream, but all those were personal achievements, and South Carolina was more of a team accomplishment, a community win and special moment, and to be able to share it with the entire school and the state of South Carolina is something I’ll never forget.”

Whit, who played three years at South Carolina and finished with that dramatic moment, was drafted in the ninth round by the Royals and started his minor league journey that summer.

He gradually moved up the ranks with respectable numbers before having a breakout year in 2014 when he hit .314 with eight home runs and 41 doubles splitting time between Double-A Northwest Arkansas and Triple-A Omaha.

In 2015, Whit took the next step toward the big leagues by hitting .265 with 32 steals in Omaha and started there again last season before getting the call from Kansas City in May.

It was a long, frequently frustrating journey.

“It’s a pretty difficult life,” Whit said of the minor leagues. “You’re making no money. Most of time you’re living with four or five guys crammed into one apartment in a bad part of town. In the lower levels, depending on where you are, you’re usually in a small city. It’s tough, and you travel all the time, and you’re not playing in front of many fans.

“The games are just about individual accomplishments. They don’t care if you win or lose. For me, coming from South Carolina where you’re playing before 9,000 to 10,000 people a night, everyone is hanging on every pitch because winning is so important. In the minor leagues, it’s hard to just play for yourself, when it’s not always been about winning.

His dad, Bill, figured Whit might have some difficulties making the adjustment from college to the minor leagues because of the difference in what the games really mean.

“The minor leagues, you’re playing for nothing and for the opportunity to get to the big leagues, and that’s what the carrot is at the end of the stick,” Bill said. “You just have to keep plugging. Winning is secondary. It’s about development, and that’s hard for a guy like Whit. Every game, he wants it to be like life and death.”

Bill certainly knows all about playing in the minor leagues.

He was a second-round draft choice of the California Angels in the 1982 draft after being named ACC Player of the Year in back-to-back seasons at Wake Forest.

As a sophomore, he set an ACC record with 20 home runs, had a .389 batting average and knocked in 61 runs while claiming All-America honors. In his junior season, he was even better with a .476 average while leading the nation in homers (17), RBI (64) and winning the ACC triple crown before turning pro.

In six professional seasons from 1983 to 1988, Bill clubbed 94 homers and had 413 RBIs playing in the minor leagues for three organizations – the Angels, Pittsburgh Pirates and Texas Rangers. Three of those seasons were in Triple-A.

But he never made it to the big leagues.

“Just in spring training in the big league camp is as close as I got,” Bill said. “It’s really about timing and opportunity. The beautiful thing is I haven’t missed it a day.”

Bill came back home and got his degree at Wake and now works in athletic development at his alma mater after a long career at ISP Sports (now IMG College).

Certainly, there are eerie similarities between the minor league paths for both father and son.

But Whit made it.

Bill is pleased that Whit got his chance in the big leagues but not surprised that it finally happened.

“He’s never shied away from competition,” Bill said. “Every since he played on my travel team when he was 11 years old, he didn’t start for me because he wasn’t good enough. He had to earn that spot on my team. He’s been competing and earning a spot everywhere he’s gone. I’m not betting against him. He’s exceeded everybody’s expectations – not mine or his own.

“I’ve always thought he could play in the big leagues. I told him that when he was in high school and 5-10 and 150 pounds. Now he’s 6-0 and 195 pounds. He’s worked hard to do that. When he went down to South Carolina, he didn’t even have a position. They said go try center field. He had never played there before. He just figured out how to do it and became a freshman All-SEC defensive player. His work ethic is better than most people. His want to is off the charts.”

Bill hopes that Whit’s first season with the Royals – with the fast start and good finish – will put him into position to being a productive major-league player going forward.

“Hopefully, from now on, he’ll be a big-leaguer doing his thing in Kansas City,” Bill said.

Whit knows he’ll always have his family behind him every step of the way. Bill, Kissy and their two younger children – Costner and Hite – made it to Kansas City for his first major-league game and have traveled to other cities as well.

Then there’s his grandfather, Bill Sr., who drives all over the place to see Whit play.

“He doesn’t think anything about getting in the car and driving 1,000 miles or whatever to follow me around,” said Whit, who added his grandfather has seen him play in Kansas City, Chicago, Minnesota and Baltimore.

Bill Sr., who is 87, has become somewhat of a legend himself with TV interviews and even getting fan mail in Kansas City. “He’s an amazing guy,” Bill said of his dad. “He wants to see his boy play. He also goes to see Hite play every football game and every baseball game at Davie High.”

Besides Bill playing baseball, Kissy was on the tennis team at Wake Forest, and young Hite seems to fit in with the family sports model as a promising football and baseball player. Hite made all-conference in football as a sophomore safety for Davie.

“He’s got the size that Whit never had,” Bill said. “He’s already 6-2, 190 pounds and can run. He’s a baseball guy. He’s got a chance to be really good, but does he have the want to and drive that Whit does? I don’t know. Time will tell. But it sure is an advantage when your brother is in the big leagues.”

Sister Costner is the middle sibling, and although she isn’t on the field, she has done work in sports as a reporter and video coordinator. She even got to go to Kansas City and do a TV interview with her big brother late in the season.

“My family has been nothing but supportive,” Whit said.

And then there were those conversations with his dad over the years about the long grind in the minor leagues.

“Dad had been through it, and he gave me his advice and told me what he learned from his time doing it to help me make the best decisions I can for myself,” Whit said.

“I thought about throwing in the towel I can’t even count how many times. One of the things that my dad told me that really stuck with me was once you take the cleats off, you can’t put them back on, and to be sure you’re ready when that time comes.”

Now that Whit’s made it to the big leagues, he hopes that won’t be any time soon.

Soccer loses 3 by 1 goal each