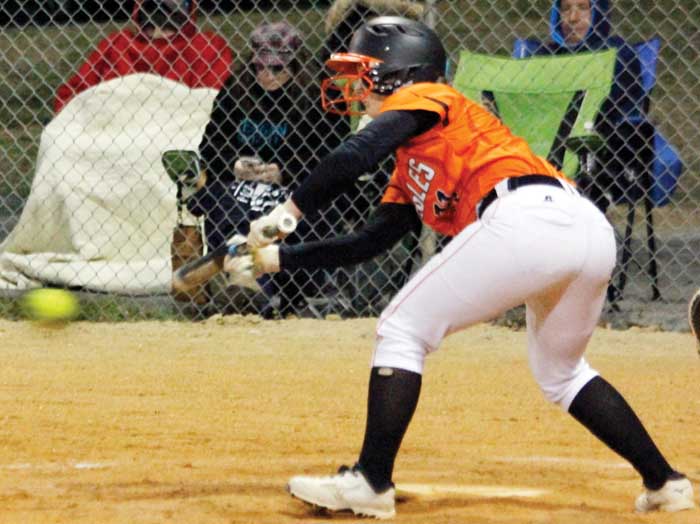 Never saw that coming, did you? Davie’s varsity softball team won 17 or 18 games from 2014-16, and it was 3-0 going into a showdown at undefeated Forbush. A good team should not beat another good team 10-0. Yet, that is what Davie experienced as the Falcons humbled the War Eagles in East Bend.

“And they’re a young team,” coach Dawn Lowery said. “They’ve got some talented freshmen. They’re a great hitting team and they outplayed us in most aspects of the game.”

Davie’s 15-0, three-inning rout of visiting Reynolds in the Central Piedmont Conference opener on March 7 was predictable. It was the 47th straight win over the Demons.

Reynolds had more errors (five) than hits (two) against Olivia Boger, who tossed 20 of 25 pitches for strikes in two innings, and River Simpson, who retired the third-inning side in eight pitches.

The next night at Forbush, the Falcons threw the first punch when they took a 1-0 lead in the bottom of the second. They kept throwing and throwing, scoring three in the third and six in the fifth … and Davie had no response in the 10-0, five-inning loss.

After outscoring the first three opponents 41-9, Davie stumbled to 3-1 overall. It was the worst loss since 11-0 to South Caldwell in the second round of the 2015 playoffs. It was just a lousy day for Davie, which had two errors to Forbush’s none and no extra-base hits to Forbush’s seven.

“We were prepared. We were focussed,” Lowery said. “I felt like we were confident, more confident than we have been when (Davie lost to Forbush 2-1 in 2015 and 7-1 in 2016). We got behind early and we didn’t have enough fight to come back. We didn’t have the grit that we needed to beat a team like that.”

The Falcons collected three hits in the second, when they took the 1-0 lead. They had three hits in a three-run third and six in a six-run fifth that ended the game early via the mercy rule.

The Falcons are certainly a powerhouse at the 2-A level. They went 22-6 in 2014. In Jeremy Helton’s first year as coach in 2015, they went 27-2 and finished as state runner-up. Last year they went 26-4 and reached the final four. Even though they graduated nine seniors and seven starters in 2016, they have remained legit with three freshmen, one sophomore and two seniors in 2017. They improved to 3-0, outscoring the victims 35-1. Helton, a 1998 Davie graduate, is 56-6 as Forbush’s coach.

Helton’s junior pitcher, Caiti Mickles, who carved up JV competition in 2015-16, has all three wins. She blanked Davie in 64 pitches, or 12.8 per inning.

“She throws it hard and she moves the ball well, too,” Helton said.

“There’s only one way to answer back and that’s to play our best ball against Reagan,” Lowery said. “Yeah, the Forbush loss hurt, but we couldn’t let it beat us twice. Forbush matters, but ultimately one of our first goals is to win the conference, and Reagan was the next step.”

Boger struck out the first four Raiders, finished with six Ks and allowed one hit as Davie improved to 4-1 overall and 2-0 in the CPC.

Reagan turned to a relief pitcher in the third, and Ferguson greeted her on the first pitch, sending a three-run homer to opposite field in left. Her second long ball of the season came during a 14-batter, nine-run third.

“I talked to Sierra before she went to the plate,” Lowery said. “I said: ‘New pitcher. She’s might come in kind of cold, so be patient. But if that first pitch is in there where you want it, unload on it. It was an outside pitch and she sent it to oppo. It was exciting.”

Among the defensive highlights was Smith’s 4-7 double play when the score was 1-0, getting one out at first after a Reagan bunt and the second out at third as left fielder Devereaux raced in to make the tag.

“The protocol is for (catcher Hendren) to get third unless she fields the bunt,” Lowery said. “Anna was definitely heads up. It was a huge play because they had some momentum going.”

Third baseman Parks made a diving stop of a grounder to her left, and she hosed the runner at first from her knees.

“Sierra had to scoop it,” Lowery said. “It was one of those defensive plays that give you momentum.”

When Dishman, who also plays outfield, took over for Lewis at shortstop in the later innings, she didn’t blink. She smothered a smash and recorded the third out with a throw to first.

“Desiree was on base the inning prior to that, and she got hit in the ankle with a pickoff throw,” Lowery said. “Emilee is perfectly capable of playing short, so I put her in for that inning. She had one or two hard hits at her and she fielded it smoothly. She actually warmed up in the outfield, so that’s showing some talent.”

Notes: Ferguson has delivered eye-popping numbers – a .615 average (8 for 13) to go with a 13-game hitting streak dating to last year. … Devereaux (.529, 9-17) and Tierney (.500, 7-14) are also hitting .500-plus. Tierney has a five-game hitting streak. … Davie received great news when senior McKenzie Barneycastle had surgery March 6 to remove a brain tumor. She came home March 8. Her mother, Dottie, posted on Facebook: “The MRI showed all of the tumor has been removed.”