Baseball scraps its way to 3-1 start 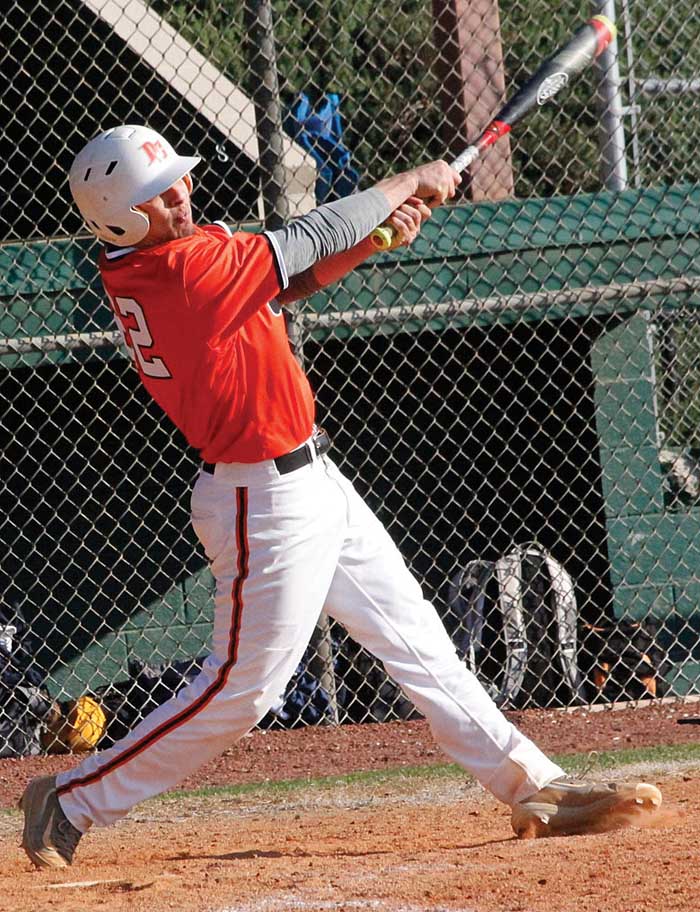 Outstanding pitching and timely hitting enabled Davie’s varsity baseball team to sneak away with one-run wins over Lake Norman and Carson in the first two games of the season. After losing to Greater Cabarrus Home School, the War Eagles topped South Iredell to start 3-1 after a demanding four-games-in-six-days stretch.

“Just one more run than the other team is what you’ve got to look for,” coach Bobby Byerly said.

In the bottom of the first, Reynolds looked at the first pitch for strike one. He swung through strike two. He obliterated the next pitch, rifling a shot to center for a stand-up double.

“I was swinging at anything close,” Reynolds said. “He was throwing hard. I was surprised a little bit; I’m not going to lie. It was a little low and I just tried to put the bat on the ball. It went a little farther than I expected.”

Reynolds has been there before, hitting .350 as a junior.

“What a stroke,” Byerly said. “He’s our leader. He’s in the leadoff spot for a reason. He did the very same thing at East Davidson (in a scrimmage). He set the tone right there.”

After Beau Byerly walked, Tyler Roberts put Davie on the board with a bullet to center. Byerly would score on a throwing error as Davie jumped ahead 2-0.

In the third, Reynolds dumped a single to center. Then came a tomahawk hit-and-run single the other way to right field from Byerly. Runners were at the corners.

“It was a slash hit-and-run,” coach Byerly said. “It was in the lefthanded batter’s box. I don’t know how he made contact.”

Reynolds scored on a wild pitch to push Davie’s lead to 3-0. The Wildcats clawed back with single runs in the fourth and sixth, but Davie held on to gain a measure of revenge for two narrow losses to LN in 2016 (5-4 and 4-2).

Reynolds (2 for 2, two runs, walk) was responsible for two of Davie’s five hits. Byerly (1-2, walk), Roberts (1-3) and McKay Chamberlain (1-3) had one apiece as Davie handed a loss to Zayicek, who gave up three runs (two earned) in five innings.

On the mound for Davie, Roberts, Reynolds and Carson Whisenhunt combined for a three-hitter. Roberts gave up one run in five innings, working around four hit batsmen. After going 4-0 with an 0.88 ERA as a junior, the righthander is still unbeaten in his varsity career. “Tyler threw a heck of a game,” Byerly said.

Reynolds worked a hitless sixth, the one run off him being unearned. Whisenhunt, who logged one varsity inning as a freshman, wasted no time tucking LN away, striking out two of three batters to earn the save.

“We told him to throw fastballs and save his pitches,” Byerly said. “He was lights out.”

There were defensive highlights. When Roberts threw errantly on a pickoff attempt, second baseman Jake Barneycastle slid across the bullpen to retrieve the ball. He relayed to shortstop Reynolds, who cut down the runner at third. In right field, Chamberlain “made a heck of a play in foul territory to bail us out,” Byerly said.

Sophomore Hite Merrifield came off the bench to play left field, charging in to make a diving catch.

Davie only managed three hits against visiting Carson on Feb. 28, yet it scored enough to win, 1-0, as Whisenhunt, Zach Hudspeth and Reynolds continued steller work on the mound.

The War Eagles had faced an early meat grinder and they lived to tell about it with two hard-fought victories. Making the 1-0 win sweeter was the fact it came against Owen White. The 6-4, 180-pound junior is a special talent. In fact, he could be a multi-millionaire by June of 2018.

“Man, that cat was impressive,” Byerly said after White took the loss despite giving up one unearned run with no walks and eight Ks in six innings. “I hadn’t seen him in a while. He’s all they talk about. He maxed out at 93 (mph). He was consistently in the upper 80s to 91. The 93 was Jake Barneycastle’s last at-bat. I think Jake separated both shoulders trying to make contact.

“He’s rated the No. 1 pitcher in the state by a lot of things. Scouts are saying he’s going to go first or second round. When you’ve got Florida, Mississippi State, Clemson and South Carolina as people who have already offered and you’re a junior, you must be pretty spiffy.”

Davie manufactured the game’s only run in the third. With one out, Merrifield’s first varsity hit – a ground-ball single up the middle – was one to remember.

“We had some good at-bats against a really good pitcher,” Byerly said.

Merrifield was 0 for 1 in his young varsity career before steering a fastball through the hole.

“(White’s) a great baseball player,” Merrifield said. “Seeing 93 right out of the chute is pretty crazy. I played in a showcase at Clemson over the summer, and I faced a guy throwing in the low 90s. This was my second encounter, so I kind of knew what I was going up against. My approach was stay short, make sure I see his pitches and try to hit the fastball, because all of his other pitches are real nasty. You want to hit the straight one.”

Barneycastle sacrificed Merrifield into scoring position, pushing a bunt to the right side and nearly beating it out.

“Jake’s a good bunter,” Byerly said. “The second baseman made a heck of a play to throw out Jake. It was a major-league play. Any other day that would have been a bunt hit.”

Reynolds hit a slow roller to third. He was credited with a hit, and a wide throw to first allowed Merrifield to trot home.

Davie’s starter, Whisenhunt, worked out of a second-and-third, one-out jam in the first. Barneycastle stabbed a liner for out two. After a walk loaded the bases, catcher Cody Hendrix back picked the runner at first. Hendrix came up big again in the second, throwing out a runner trying to steal second.

“We had him on a strict pitch count because we wanted to save him for Friday and Saturday,” Byerly said. “He got out of some rough situations. But when you leave with a shutout, things are positive.”

Against reliever Hudspeth, Carson loaded the bases with one out in the sixth. Davie was in a thicket of briars when Reynolds took the ball in relief. A pop out to third baseman Landon Bandy was the second out. Barneycastle preserved the 1-0 lead with a tremendous play on a  “swinging bunt.”

“Jake had to come in screaming, and he literally threw it behind him to make the play at first,” Byerly said. “He had the same play in the scrimmage and he threw it away. He made an absolutely great play.”

“He threw well,” Byerly said. “He did what he was supposed to do – make them hit the ball.”

Reynolds recorded five outs in nine pitches to pick up the save.

Whisenhunt, Hudspeth and Reynolds combined for a four-hitter. They had to be great to deny White, who carved up Davie with 12.1 pitches per inning on average.

Bandy somehow smothered a rocket in the fourth inning. Merrifield made another diving catch in shallow left.

“It was one of the hardest-hit balls you’ll ever see,” Byerly said of Bandy’s play. “I would say he heard it; he never saw it. I don’t know how he caught it. His legs were crossed. He was trying to protect himself. He made the play at first.”

Reynolds (1-3), Hudspeth (1-1, double) and Merrifield (1-2) had Davie’s only hits. Hudspeth, a lefty, got a double when his ball caromed off the bag at third and rolled to the wall.

Davie was 2-0 even though it had only managed four runs and eight hits in two games. The reason: Four pitchers put together a 0.50 ERA. Davie, which edged Carson 6-5 last year, is 6-1 in one-run games dating to 2016.

Byerly coaxed everything he could out of his slow-starting bats in the first two games, but Davie couldn’t keep pace against visiting Greater Cabarrus Home School on March 3. GCHS banged out 17 hits, jumped ahead 6-0 in the first two innings and downed Davie 9-5.

“Their one through four batters are ridiculous,” he said. “I haven’t seen anything like that. They absolutely raked.”

Hudspeth (five innings) fell to 1-1 in his first start of the season. Matthew McKnight went two scoreless innings in his first varsity appearance.

Whisenhunt and Reynolds got it done on the mound, and Byerly stayed hot with two hits. But it was Brunelli, a junior who made his varsity debut in the loss the day before, who stole the show in a 5-3 home win over South Iredell on March 4.

In the bottom of the first, Reynolds (error), Byerly (single) and Roberts (walk) loaded the bases for Brunelli, who plated a pair with an opposite-field double down the left-field line. Roberts later scored on an error as Davie bolted to a 3-0 lead.

Brunelli capped his unexpected heroics in the fifth, following Byerly’s single and stolen base with a run-scoring single to left. That made Davie’s lead 5-1, and that made Brunelli the team’s RBI leader (three) in one memorable day.

“He had a great at-bat (vs. GCHS), and he had two great at-bats (vs. S. Iredell),” Byerly said. “He stepped up. He struggled the first couple of weeks with the bat. He has worked and worked and worked. He’s always one of the first ones there, and he’s always one of the last ones to leave. He’s an example of working your butt off and not being happy sitting over there. And he took advantage of an opportunity. Kudos for him.”

On the mound, Whisenhunt continued to deliver on his substantial potential, going six innings and allowing three hits and two runs (one earned). Through 10 innings, the sophomore southpaw is 1-0 with an 0.70 ERA.

“He started locating his breaking ball in the third inning,” Byerly said. “He said: ‘I finally found my breaking ball.’ Once he found that third pitch, he was very effective.”

Reynolds just kept doing what he does out of the bullpen. All nine of his pitches were strikes as he picked up his second save. He took a page from Yogi Berra when he told Byerly: “I love pitching, as long as they don’t hit me.”