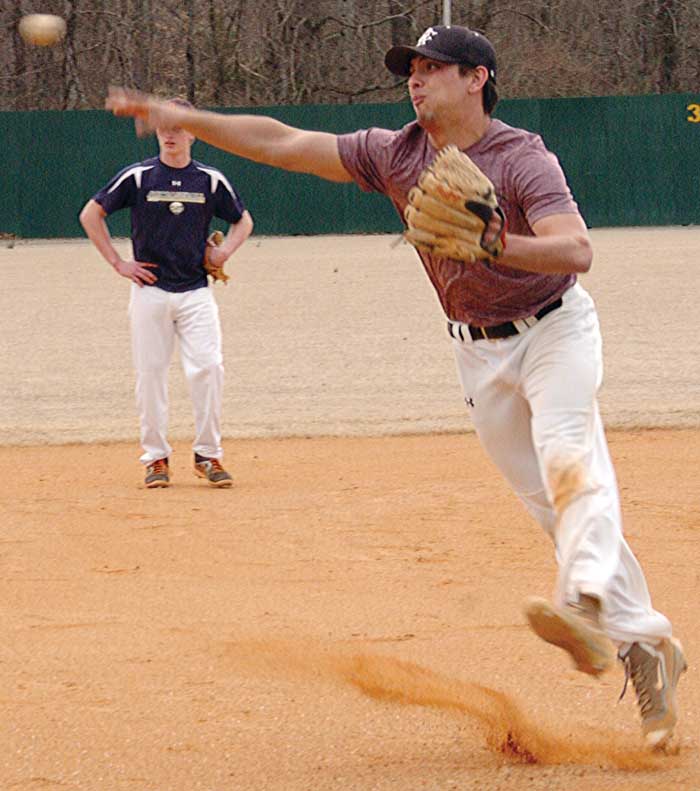 Baseball season is under way at Davie High School.

Fifth-year coach Bobby Byerly is restocking a cupboard left nearly bare by the graduations of Nathan Harrell, Paul Davenport, Brandon Lankford, Jalen Scott, Mitchell McGee, Ryan Harrell, Craig Colbourne, Andrew Davidson, Caleb Wallace and Isaac Campbell. With a ton of seniors, the 2016 War Eagles went 18-5 overall and 9-3 in the Central Piedmont Conference, winning the most games and achieving the best league finish in four years. The season ended prematurely, however, with a 6-4 first-round loss at home to Mooresville.

The 2017 race figures to be another glorious crapshoot. Davie may not have the pieces necessary to claim first, but it should be competent.

“The conference lost a lot of talent, and we’re right there with them,” Byerly said. “We’re young. We’ve got three returning guys who got a lot of field time. We’ve got a lot of guys who are unproven at the varsity level. It’s a different world going from JV to varsity.”

Roberts is the only experienced pitcher back. Last year he went 4-0 with an 0.88 ERA in four starts and one relief appearance. He seems ready for the task of No. 1 hurler and No. 3 batter.

“Tyler has looked the best (on the mound) to this point,” Byerly said. “He’s looked pretty polished. He had some great games last year against some tough opponents.”

“Southeast Guilford was No. 4 in the state at the time,” Byerly said. “He is a completely changed person over the past year. I noticed it in football. He’s a workaholic now. Not that he didn’t work before, but he’s hit another level. I have big expectations for him. And he’ll probably hit in the three spot.”

Although Carson Whisenhunt only has one varsity inning under his belt, Byerly believes the sophomore lefty has a chance to be special.

“I would say he’ll be our No. 2,” he said. “He’s throwing pretty hard. He’s throwing upper 80s. We were having a hard time getting around on him (in practice).”

The No. 3 arm figures to be senior lefty Zach Hudspeth, who went 2-0 with a 1.50 ERA in 14 innings last year. But questions abound about pitching depth, especially with the new pitch-count regulations. Senior lefty McKay Chamberlain and junior righthander Matthew McKnight are pitchers. Byerly said McKnight “probably throws more strikes than anybody.”

Junior Cody Hendrix, who became a star linebacker in football, could have a huge season at catcher.

“When he brings his game, there’s nobody better,” Byerly said. “He has a rocket on his right shoulder, and that allows us to do a whole lot of different things.”

Roberts and Whisenhunt will split time at first base.

“Carson has shown a lot of power,” he said. “He has really matured in the past year. So I don’t see him coming off the field much at all.”

Senior Jake Barneycastle is a bundle of energy at second base. Reynolds – who was a neon-lights quarterback the past two years during football, earning a preferred walk-on spot at Charlotte – has quietly waited to do his thing at shortstop. After spending the past two years in the outfield, now it’s his show at short.

“Chris is just an athlete,” Byerly said. “He’s going to do all the little things. He’s going to find a way on. He’s not flashy (at short). He just makes all the plays. He’s a communicator in the middle.

“Chris and Jake really work together well. When you’ve played together since you were 12 years old, it pays off.”

Third base is a battle between junior Landon Bandy, McKnight and Hite Merrifield, a sophomore who has already received Division-I offers. Merrifield’s future home is in the outfield. His brother, Whit, is a member of the Kansas City Royals.

“Hite is going to be (in the outfield) some, too,” Byerly said. “He’s really looked good. He’s really stepped up in the last two weeks. I would say stick-wise, he’s probably looked better than anybody. So he may be working his way up the ladder. He does all the little things. In practice he scored from third on a passed ball that was maybe 12 feet away from the catcher.”

Junior Ben Summers and Byerly appear locked in at left field and center field, respectively. Chamberlain is a likely starter in right.

Scoring enough runs to be a contender in the CPC is a concern. Reynolds, Byerly and Roberts will probably open the season as the first three batters. “Then it’s pull them out of a hat,” Byerly said. “My worry is scoring runs. After the three spot, we have nobody with varsity experience.”

Junior Cody Smith is the team’s utility man. Reynolds will have to log some innings, and that’s when Smith will take over at short.

“Cody can play every infield position but first, and he can play the outfield, too,” Byerly said.

The biggest concern, though, is how Byerly will navigate three- and four-game weeks.

“We have four games (this) week and we’ve got five arms,” he said. “Reynolds has been throwing some. He’s looked sharp. He is going to have to fill in some innings.”

Despite all the rebuilding that Byerly is having to do, he said the process has been a ton of fun so far.

“This is the most enjoyable group that I’ve had at this point in the game in years,” he said. “I mean they work and they’re fun. It’s a bunch of goofballs, but when it comes time to work, they work. But whenever it’s not time, they enjoy themselves.”

Notes: Byerly is 53-40 overall and 23-23 in the CPC through four years. … The seniors are Barneycastle, Chamberlain, Hudspeth, Roberts, Byerly and Reynolds. The juniors are McKnight, Smith, Bandy, Summers, Guy Brunelli and Hendrix. The sophomores are Whisenhunt and Merrifield. … The assistant coaches are Danny Allard and Jamey Holt.