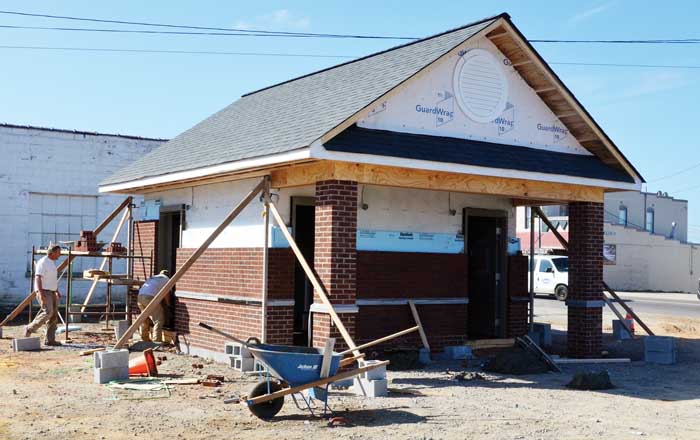 Public restrooms are the first phase of a new park going up between the police department and the Horn Building in Downtown Mocksville.

A small park in Downtown Mocksville has been talked about for some 20 years.

Now, the first phase is under construction.

Permanent public restrooms are being built on the property between the police department and the Horn Building on North Main Street.

Mayor Will Marklin said that the final design of the park hasn’t been determined, that the restrooms are the first phase and will help during downtown events, including the car shows which start again next month.

He hopes some type of small venue, maybe an ampitheater, is included in the park. A local club has contacted the town, asking to help pay for a portion of the park.

The restrooms, paid for in part by a state grant, are a logical first phase, relieving pressure on businesses when folks come downtown for other events.

The town is also replacing water lines downtown later this spring, and it will mean traffic detours around the construction. Town officials are working with the Department of Transportation on detour routes.

Some of the water lines are more than 100 years old, and travel through the middle of downtown, including the town square, where two large oak trees stand. Two were cut last year because of disease.

Marklin said that after or during the water line project, officials will decide whether to keep the two trees that are left, and whether to plant more. Arborists will be consulted before that decision is made, he said.

Engineer Chuck Willis reported to town board members last month the water line construction should start this spring, and take approximately 60 days. Traffic would only be detoured around downtown when work is being done, he said.

“It’s going to be touch. We’ll take one block at a time,” Willis said.

Willis hopes to present more detailed plans to the board when it meets next week.

The town has received a state grant that will allow it to pinpoint all water and sewer lines, as well as the condition of those lines, Willis said. “We’re to the point we know what we don’t know.”