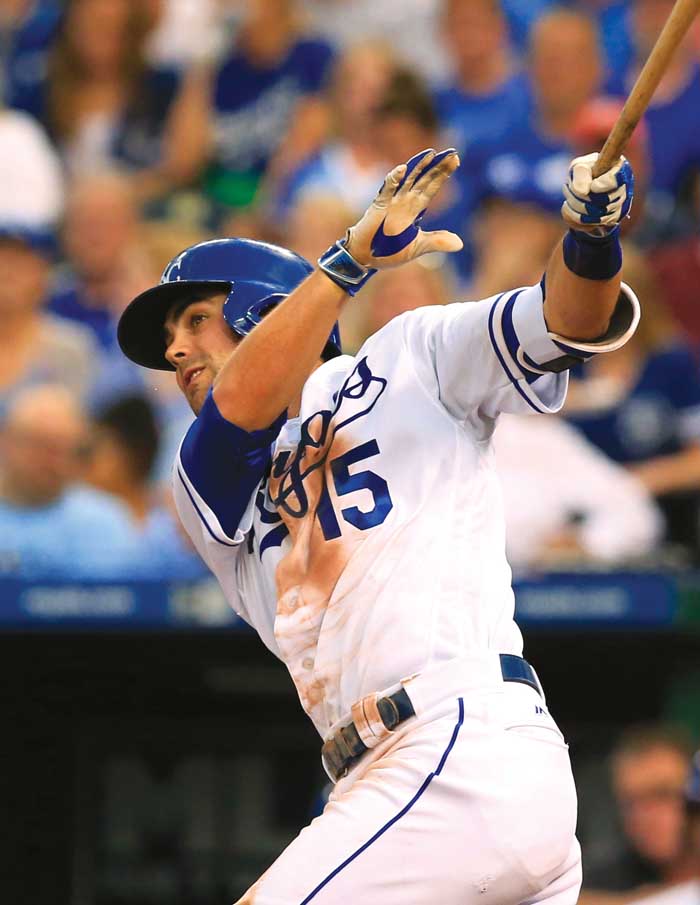 It’s a good thing Whit Merrifield is, from a mental standpoint, tougher than leather.

But halfway through his rookie campaign in the major leagues, he was sent back to Triple-A Omaha.

That’s when his mental toughness kicked in. He spent a month and a half in the minors, returned to the bigs in September and promptly tore it up, rising from the bottom of the order to the top in a matter of days and again becoming an everyday player for the Royals.

Despite the hot finish, Merrifield entered 2017 Spring Training amid a fluid situation at second base, competing with two or three others for the starting job. He’s unfazed. He’s used to it. It’s seemingly never going to be easy for him. But he has the demeanor to deal with the professional baseball roller coaster. His facial expression wouldn’t change at a wedding or a hanging.

“I’ve always been one to have to work for positions that I’ve been given,” he told The Star. “I’ve never really been handed a job, so I’m comfortable going in and competing with other guys.”

Merrifield reached the major leagues through persistent determination. After spending six-plus years in the minors, he made his major-league debut on May 18, 2016, spicing the moment with a hit off Boston’s David Price. His start was amazing, a .356 average in May. He hit .339 through his first 27 games. He broke numerous Royals’ rookie records. He quickly became a fan favorite, with Royals’ fans nicknaming him “Two-Hit Whit.” It was fitting as Merrifield had 26 multi-hit games for the season. He entered the all-star break with a .290 average.

The ride lasted until a 13-game slump in July, when he went 5 for 45 (.111). When his average dropped to .271 over 210 at-bats, he was demoted to Omaha. The Royals promoted 21-year-old Raul Mondesi, one of the top prospects in the organization.

“I still had a pretty good year going, which kept me going,” Merrifield said in early February before a workout at Torque Performance and Fitness in Mocksville. “I knew I had gone through a little rough patch and the team was trying to create a spark, which I completely understood.

“When I had my meeting with (KC manager Ned Yost), he told me what was going on. The team was scuffling and he said: ‘We don’t expect this to be a very long stint in Triple-A.’ So I was actually a little surprised it went as long as it did, but I knew I’d be back in September. So I went to Triple-A, worked on some things and tried to get hot again. I kind of hit my stride right when I got back to the big leagues and finished on a good note.”

Mondesi had a miserable time in Merrifield’s spot, hitting .189 in 45 games. When Merrifield was called back up when rosters expanded in September, he answered the bell, hitting .329 with a .365 on-base percentage in the first 22 games of the month.

“I played pretty well the whole month, which was much needed,” Merrifield said. “And hopefully I can carry that momentum into this year.”

The Royals, who won the World Series in 2015, failed to make the 2016 postseason. The consolation prize for Merrifield was getting to come home and watch his sophomore brother, Hite, play safety for Davie’s dominant football team. Whit made his first Friday night appearance on Oct. 7, when Davie whipped West Forsyth 20-3 in the rain. Whit was on hand for the last seven games. Davie went 12-2 and reached the state quarterfinals. Hite delivered six interceptions (the most in nine years) and was named to the all-conference and All-Northwest teams.

“The highlight of my offseason was watching not just Hite but the whole team,” he said. “It was such a special year and it was a ton of fun. I enjoyed every Friday night. I look forward to it every week. I watch Hite a little more closely than anyone else. I still wish he’d be a little more aggressive. But sometimes I’ve got to remind myself this is his second year playing safety and he’s a sophomore out there. Last year to this year was a huge jump for him. I think he started to understand defense a little bit and understand the scheme they were running. … He’s a big boy. He’s all of 6-3 and 190 pounds right now. He’s getting after it in here (at Torque), too.”

From October through the first of February, Merrifield worked out four days at week at Torque.

“On days I’m not working out, I’m doing some stretching, baseball activities and running,” he said. “I took a couple weeks off once the season was over, went on vacation and did stuff like that. Once the offseason gets really cranked up, it’s pretty nonstop and pretty intense.”

Just like the previous year, the offseason training program on Torque days included feeding himself often, as in seven meals a day. He devoured food every two hours. The diet: Nine eggs and oatmeal for breakfast; chicken, rice and vegetables three times during the day; red meat for dinner; and at least two protein shakes mixed in.

Merrifield told mlb.com that “the hardest part of this is really prepping all the food. It just takes so much time. But in the end, I think it will be worth it.”

Last year Merrifield demonstrated his versatility by becoming the first Royals player since 2010 to start games at five different positions. He started 50 games at second, two at third, 11 in left field, three in right field and one at first base.

“And something the front office in Kansas City takes a lot of value in is defense,” he said. “That’s a big thing. I work hard on my defense. In the offseason, there’s only so much you can do, but I’m going out there just a little over a week early to get defensive reps in. And hopefully I can have a better year on defense this year.”

Last year Merrifield ranked fourth among American League rookies in wins above replacement, racking up 1.5 wins. He proved himself with the bat. He got it done defensively. He was a jack of all trades.

And yet the second base job is “wide open” in spring training, according to Yost. Merrifield is competing with Mondesi, Christian Colon, a former first-round pick who hit .231 last year, and Cheslor Cuthbert, who played third last year with Mike Moustakas on the shelf with a knee injury.

MLB.com’s depth chart has Merrifield on top, with Colon second and Mondesi third. Even if Merrifield, who turned 28 on Jan. 24, doesn’t nail down second, he could stick with KC as a utilityman.

“It’s spring training, so guys are going to compete for jobs,” he said. “I feel like if I play the way I know I can, I can win that job. I’ve put in a lot of work. Now I’ve just got to go play, and hopefully I can have a good spring.”