No magical ending for Davie wrestling 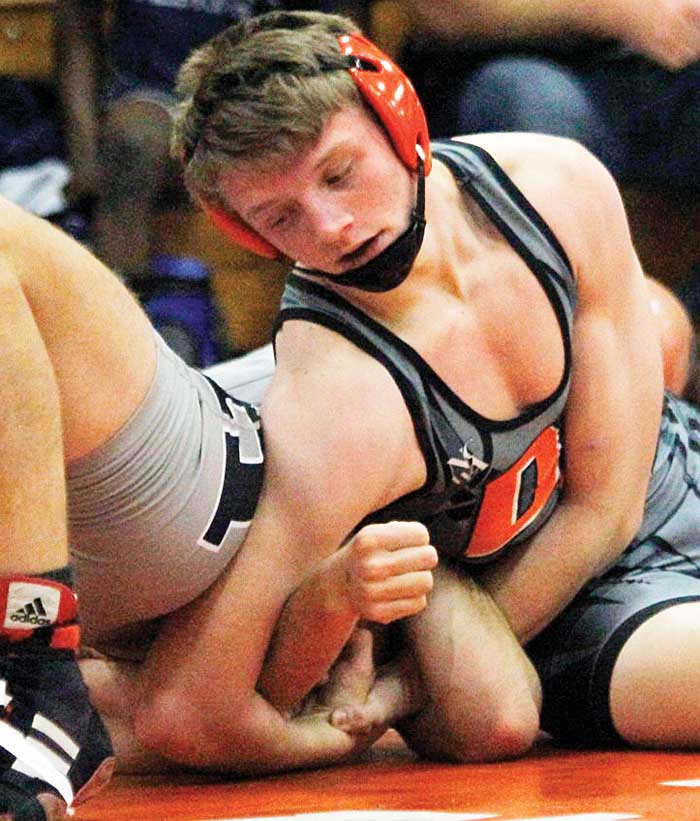 Will Allen had a big win against West Forsyth.

CLEMMONS – It was everything wrestling fans have come to expect from a Davie-West Forsyth showdown – high stakes, lots of drama and plenty of suspense.

The dream collision came at West on Feb. 2 with a berth to the state-championship match on the line.

The War Eagles jumped ahead 13-0 and held the lead through the first 10 weight classes. Here’s where the “but” arrives. The Titans snatched the last two and three of the last four matches to snatch a 31-22 victory.

The Titans remained unbeaten at 53-0, extending their winning streak to 103. The War Eagles’ 12-match winning streak ended as they finished their dual-team season at 33-2 – both losses to West by thin margins. West went on to win the state title for the second year in a row.

Davie coach Buddy Lowery, who is 845-129 in 41 years at one school, said: “We didn’t wrestle bad. That’s a well-coached team and that’s really all you can say. They got us again. They’re good. I think we’re good.”

Third-year West coach Maurice Atwood, who is 673-28 in his career, said: “It was a heck of a match. It’s a shame somebody had to lose. Davie’s got a heck of a team. They have nothing to hang their head about. My hat’s off to them. They made us sweat the whole way.”

“We started in their strength,” Atwood said. “I knew it was just a matter of time before it got to ours.”

To start things off, Davie senior Kyle McCune bumped up to 182 and won a 3-1 decision. At 195, Davie senior Jesse Carter major decisioned Josian Fontanez, who has 41 wins. At 220, Davie sophomore Jesus Olmedo handed Patrick Harding just his fifth loss with a 6-2 decision. At 285, Davie sophomore Anthony Olmedo won a 6-0 decision to stake the War Eagles to the 13-0 lead.

Although West was behind, the first four Titans did exactly what they needed – by staying off their back – for West to feel confident about a steal-it-at-the-end win.

West’s Michael Barrera (48-5 record) got West on the board with a major decision at 106, but Davie senior Hunter Smith answered with a 6-1 decision at 113 to give Davie a 16-4 lead. Smith took down Ethan Wright, who is 47-11. But when the Titans were losing, they were picking up what coaches like to call “bonus points.”

“I figured we were going to lose those first four matches,” Atwood said. “Actually, to be honest with you, we were closer after those first four matches than I anticipated we would be. When my heavyweight (Gus Smith, who is 3-4) didn’t get pinned, that was really big. When my 113-pounder (Wright) didn’t get majored, that was really big. So we were actually ahead four points than what I thought we would be.”

After Davie captured five of the first six matches, the Titans took six of the final eight. While West’s first four guys have 34 losses between them, nine of the next 10 have 41-plus victories, the exception being Chase Eller, who is 8-0 after recently transferring from Salem Baptist.

West’s 27-6 run started with Eller’s 16-8 major decision over junior Nick Gillis at 120. This one went as expected for West, but an illegal-slam call created nervous moments for the West faithful. Lowery and Davie trainer Ashley Donahue walked out to check on Gillis. If he’s unable to continue, Davie gets six points, West loses what turned out to be four and it’s a huge swing that comes out to Davie 22, West 4. Atwood and West breathed a sigh of relief when Gillis returned to the center of the mat to resume play. The referee on the edge of the mat hit Eller with a taunting call that trimmed Gillis’ deficit to 8-4. Gillis kept gutting it out, pulling within 10-7 and putting Eller on his back, albeit briefly as the horn sounded to end the second period. Eller was never threatened again, but he was nailed for taunting again after the final horn, costing West a team point. Now Davie’s lead was cut to 16-7.

While it’s frowned upon in wrestling circles to fake an injury to get six freebies, Lowery did have archrival West at his mercy with a trip to the state final on the line. But Lowery did not want to (possibly) win the match in that manner, earning even more respect from his counterpart.

“Buddy’s not the kind of guy who’s going to take a win like that, and I knew he was going to have that kid wrestle,” Atwood said. “Really, the kid wasn’t hurt. I disagreed with the ball, but that’s the way it goes. I do think Buddy, as the experienced coach he is, milked it for what he could get out of it for rest time – and I would have done the same thing, so I’m not criticizing. But, yeah, I knew he wasn’t going to do that. That’s not the Davie County way. That’s not the Buddy Lowery way. I have nothing but respect for Buddy. He’s done a heck of a job for 41 years.”

But let’s be real: Some coaches would have taken the gift six, especially with so much at stake. But if Lowery was going to win this high-pressure match, he wanted to do it fair and square, so he declined.

“(Lowery) said: ‘Suck it up. Man up. Get back out there,’” said Gillis, whose voice was barely audible. “I went back out there to do what we practice every day.”

“I could have (taken a win by disqualification),” Lowery said. “I haven’t laid down too many times (in 41 years). It’s been one or two times. I know one thing: If he would have slammed us (illegally) a second time, we weren’t going to get up. There’s a lot of people that would have walked Nick off the mat. Ashley checked him out and he was OK.”

Next came a wild duel at 126. Senior Tommy Trader’s 5-4 loss to Ethan Hnasko (51-5) was a tough pill to swallow. Trader held a 4-2 lead after the second, and Trader had something brewing late in the third while holding a 4-3 lead. But Davie assistant coach Carl Wagstaff noticed the clock was not running, and he jumped out of his chair to alert officials. The refs took 10 seconds off in their effort to correct the time. The reset erased Trader’s momentum, and Hnasko pulled a takedown out of his hat with one second left to survive the coin-flip battle. Instead of a 19-7 Davie advantage, it was 16-10.

“Sigmon gives it everything he can,” Lowery said. “He’s a good wrestler, but his elbow is hurting him a little bit.”

At 152, Davie junior Hunter Strickland dug deep to pull off a 4-2 win over Dallas Mize, who is 41-3 and was less than a week removed from a pin over Strickland. Davie had regained a 22-19 lead.

“I never saw that coming, because Dallas manhandled (Strickland) in the conference tournament,” Atwood said. “When Dallas got beat, I said: ‘Oh my goodness.’”

Davie did not have a chance in the final two matches. Junior Crayton Wise was not only hindered by a shoulder injury, he was paired with a freight train in Keon Muckelvene, who pinned to run his record to 54-0. West finally had its first lead, 25-22.

“Keon will throw a cradle in a heartbeat,” Lowery said. “Crayton injured his shoulder about three weeks ago. He’s got a nerve problem. The muscle rolls over and about kills him.”

At 170, where McCune normally operates, it was asking too much for Davie senior Isaac Arcos to upset Nathan Brewer (49-6). Arcos entered with an 0-1 career record in varsity matches, and Brewer pinned him in the first to close a riveting match.

“I knew we were in really good shape coming down with our heat,” Atwood said. “They started with their heat and we came down to our heat. They had to put somebody out there who was less experienced at 170, and I’ve got Nathan who’s pretty dang good.”

While the Titans exploded in joy, the War Eagles were inconsolable. The teams split the weight classes 7-7, but West had three pins to Davie’s none.

“These schools are archrivals,” Atwood said. “Davie’s been used to beating up on West in wrestling for years and years (Davie leads the all-time series 31-6). When I came over here, we changed that a little bit. They really came at us this year and we were able to come out on top. If something changes here or there, they could have come out on top.

“Obviously, Davie’s got a proud tradition. They’ve got a program that is established and has been for years and year and years. They never like to lose, much less to the team that is right across the bridge. It’s definitely a rivalry that people need to experience at least once, because it’s pretty dang intense.”

Davie has been consistently terrific under Lowery, but at age 64, one has to wonder how much longer he wants to chase a fourth state championship. Not even Lowery knows that answer.

“I don’t know. I really don’t,” he said. “I like matches like tonight. I like winning. If we don’t get some daggone ninth graders, it’s going to be hard (in the coming years).”

Atwood saluted him once more. “To be where they’ve been for as long as they have been is a testament to him as a man and as a coach. To be able to be where he’s been is truly astonishing.”